On February 29, 2012, Raspberry Pi Foundation started selling single-board computers trademarked as Raspberry Pi. It was difficult to buy one right away, but by July of the same year things got better. Raspberry Pi Model B was a single-board Linux computer with 700MHz CPU, 512 MB RAM, USB, Ethernet and 26-pin GPIO (general-purpose input/output) that allowed to connect external boards, I/O devices, actuators and other peripherals. The board itself was constructed on the basis of a cheap 4-layer PCB, had a low production cost and a modest end-user price of $35. The alpha version of Raspberry Pi Model B was a winner of the «Hardware Design» category at ARM TechCon 2011. 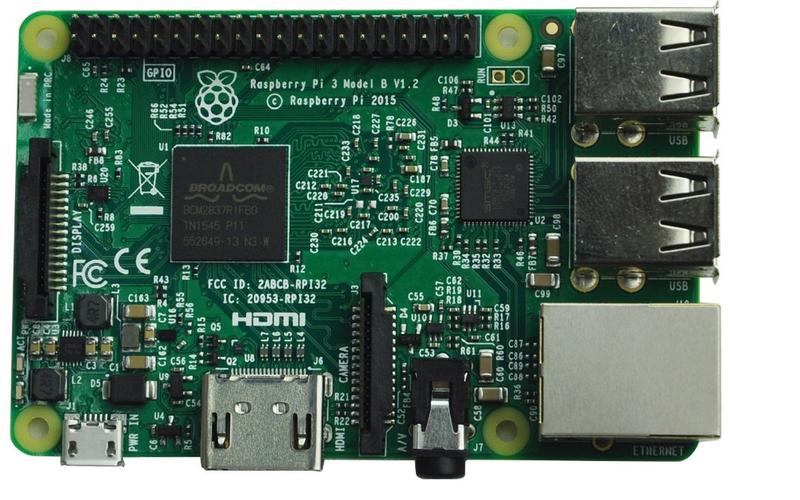 The next version will be called Raspberry Pi 4. It has been announced that the 4th generation will be powered by Broadcom BCM2711 SoC with a 1.5GHz quad-core 64-bit Cortex-A72 processor. The Pi will have two USB 2.0 and two USB 3.0 ports, Bluetooth 5.0 and will support a dual-monitor setup. VideoCore VI GPU will be able to handle 4K/60 fps videostream. There will be options with different amounts of RAM available — 1, 2 or 4GB of LPDDR4 SDRAM.

Raspberry Pi's popularity created a whole new market segment — portable single-board computers. There is also plenty alternatives, and we can take a look at them using Raspberry Pi 3B+ as a reference. We will list the specs of the competing devices, as well as their selling points and prices. Let's get to it. 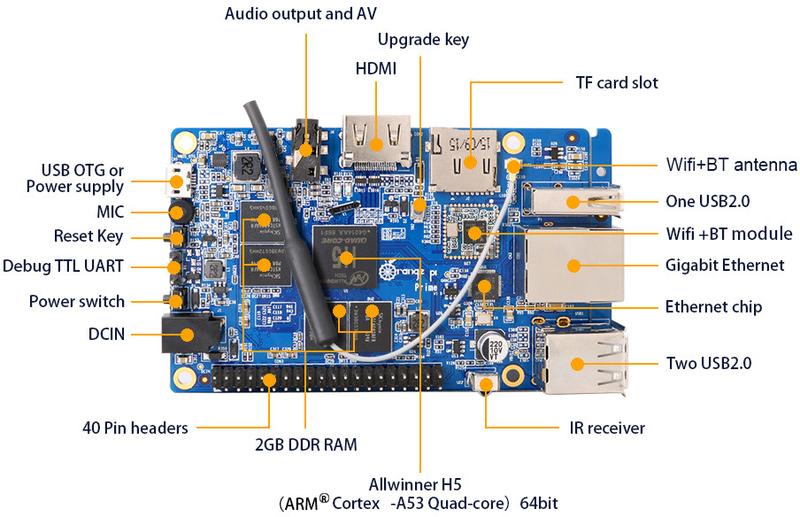 Its main advantage over Raspberry Pi 3 is 2GB RAM and Mali-450 GPU integrated into AllWinner H5 SoC. The latter will allow you to play video in 2K. There's also an IR receiver that allows the device to be controlled by TV remotes and smartphones with IR blasters. It also has an internal mic and CSI interface that supports video up to 1080p/30FPS.

Orange Pi is one of the most successful competitors of Raspberry. Orange has launched a whole series of single-board computers, such as Orange Pi 4G-IOT ( has a GSM/GPS/LTE module) and Orange Pi Zero (that supports PoE (Power over Internet), so it can be powered without using the main line). 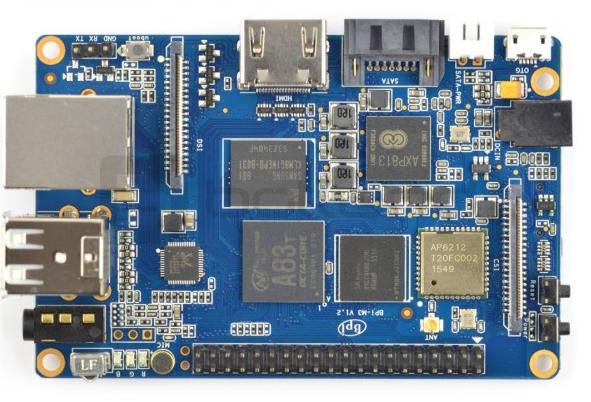 Banana series made by a Chinese company SinoVoip has been closely following in Raspberry Foundation's footsteps. There are various models available, such as Banana Pi M1, M1 Plus, M2 Plus, M2 Ultra, M2 Zero, M3.

Banana Pi M3 is a flagship model powered by Allwinner A83T SoC with 8 cores (ARM Cortex-A7 processor and PowerVR SGX544MP1 GPU), that can be overclocked up to 1.8 GHz. It also has 2GB RAM, 8GB of flash memory, two USB ports and supports Gigabit Ethernet, Wi-Fi 802.11 b/g/n, Bluetooth 4.0 and HDMI, and moreover, the board has a SATA interface. Similarly to Orange Pi Prime, it includes an IR receiver, CSI interface, UART, internal mic, line audio output and HDMI sound. Unlike the Orange series, Pi M3 features a MIPI DSI display interface with an I2C. It also has a 40-pin GPIO header. 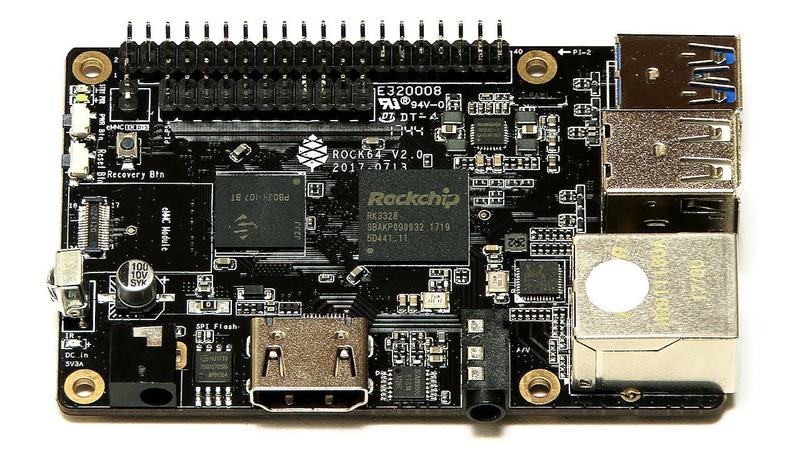 This Rock64 single-board computer has 4GB of RAM, 64-bit ARM Cortex A53 processor. Its GPU is able to stream at 4K/60FPS. It can be powered using POE. ARM Mali 450MP2 GPU supports OpenGL ES 2.0 and OpenVG 1.1 standards. Rock64 is compatible with Debian, Cent OS, Fedora and Android 8, along with many other Linux-based systems. Rock64 is supplied with the detailed documentation and has an active community, which combined with relatively powerful specs and a good price makes it a perfect Raspberry Pi's alternative for resource-intensive projects.

Rock64 has 64 GPIO pins that even support Ethernet, so the device is recommended for controlling branched external peripherals. There's also a USB3.0 port.

There's a more powerful version called ROCKPro64, its SoC is 64-bit Rockchip RK3399 (with 4 ARM Cortex A53 processors and 2 ARM Cortex A72), it has 4GB LPDDR4 RAM and two USB 3.0 ports. PINE64, a Rock64 manufacturer is a great example of business built in the DIY segment. Just like Sparkfun and Adafruit, this company supplements its devices with all the design documents, and still manages to turn profit. 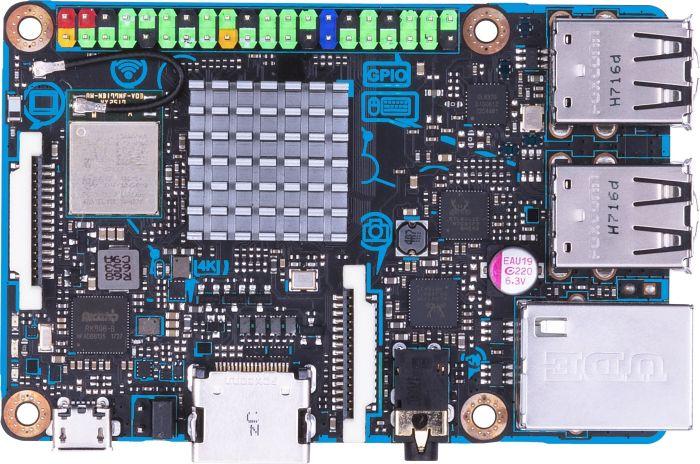 GPIO header is color coded, so it is easier to connect external hardware. A passive heatsink is already installed, which is a good selling point over the most of competition that require users to install it themselves.

There was also a low-end model Asus Tinker board (no S) that didn't have onboard flash memory, but it wasn't very popular and can rarely be found in stores these days. 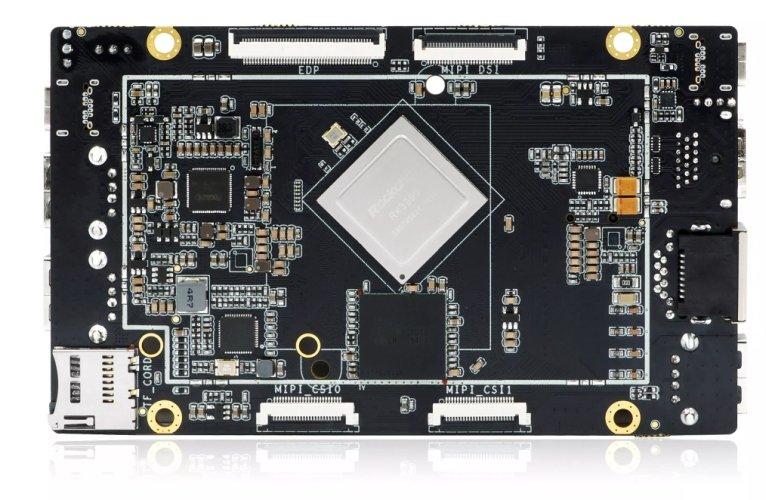 Renegade (Libre Computer ROC-Rk3328-CC Renegade) is designed to be as similar internally as possible to Raspberry Pi. You can easily install this computer inside a case made for a Raspberry model. 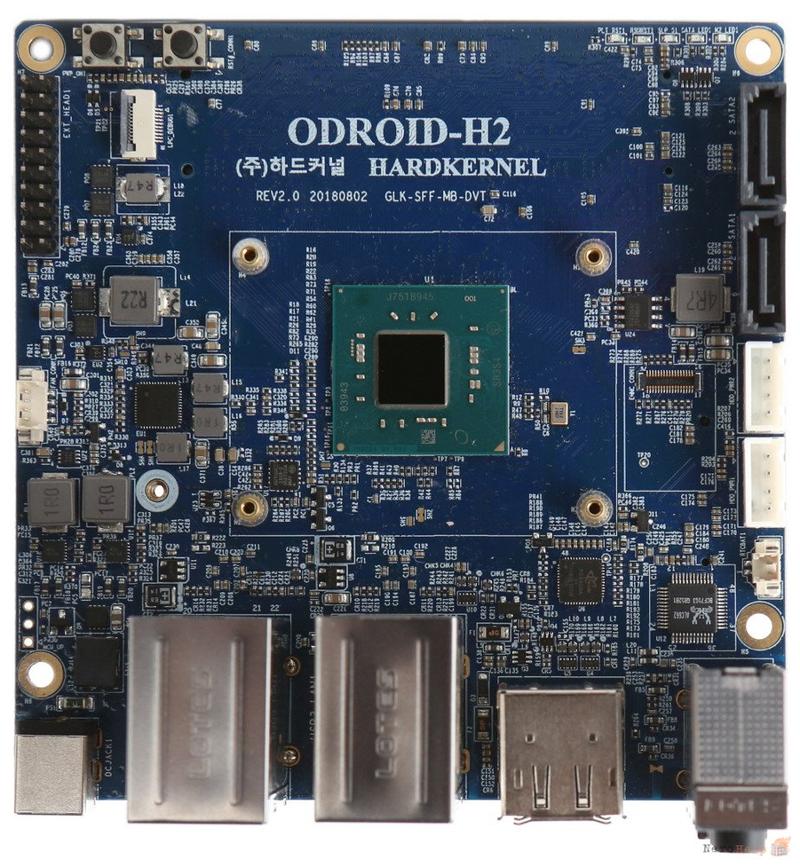 Odroid H2 might end up being very competitive in its market segment, thanks to its really low price. It's powered by quad-core 64-bit Intel Celeron Gemini Lake J4105, so it's a nice alternative for those in need of an x86-compatible solution. Board size is 110x110mm, there's a passive cooling system, Intel UHD Graphics 600 GPU, PCI-E gen2 and a Dual SATA 6Gb/s connector.

According to the Intel specifications, maximum RAM limit is 8GB (SO-DIMM DDR4 2400 MHz which is bought separately), but the manufacturer says the machine was able to handle 2x16GB RAM. The device supports Windows 10/Linux x64, DirectX 12, OpenGL 4.3, OGL ES 3.0, OpenCL 2.0. 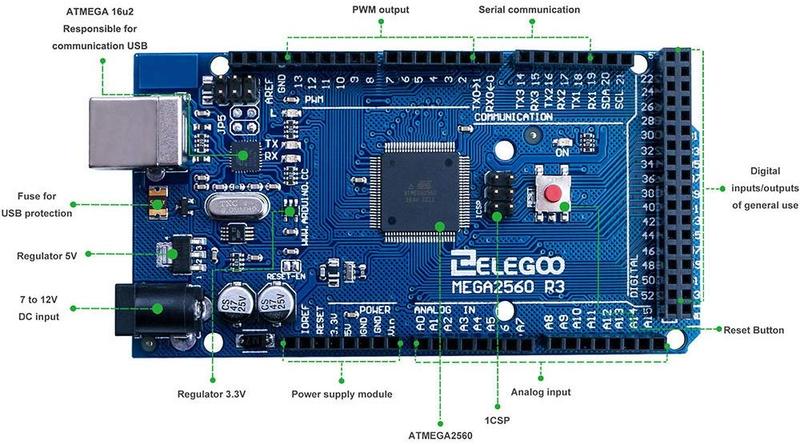 Many of you may be surprised that we decided to include Arduino in this list. Of course, there's a world of difference between Arduino and Raspberry Pi. They're in different market segments and their purposes aren't really similar after all. However, if you take a look at the comparative table below, you’ll see that there's one thing these models have in common: the price. Arduino Mega 2560 Rev3 costs $31 and Arduino Uno WiFi Rev2 goes for $42.

Let’s take a look at what’s inside this model. Microchip 8-bit AVR RISC-based microcontroller Atmega256 (16MHz), 256 KB flash memory (half of which is taken by a bootloader), 8KB RAM and 4KB EEPROM. Connections include Ethernet, Wi-Fi and Bluetooth. Arduino Mega 2560 has 4 UARTs, with one being connected to a USB-UART converter which in turn uses AVR, Atmega8U2-MU microcontroller, but there's also an FTDI option. Current capability is 20mA and 15 GPIO pins support PWM output. The manufacturer says that Arduino Mega is intended for 3D printing and robotics related hobby projects.

In the world of Arduino, there's a Raspberry Pi Zero counterpart and it's called Arduino Nano. It has an Atmega328P microcontroller, the board size is 18x45 mm. The specs include 2KB RAM and 32KB flash memory, 16MHz processor and 22 GPIO pins, 6 of which support PWM.

Arduino series managed to stay popular even after the rise of Raspberry Pi and its clones. Initially, it was so popular due to the dominance of AVR (developed by Atmel) among microcontrollers in the mid-2000s. The 8-bit microcontroller market wasn't exactly empty at the time, there were i51 and PIC, and even energy efficient 16-bit MSP430. But AVR looked like something from the future: it used a new (at the time) RISC-architecture with 1 clock per instruction (which was a huge selling point over i51 that took 12 clocks per instruction) and emerged during the time when flash memory was getting cheaper.

Arduino IDE might be another reason for the series to stay afloat despite all the changes in the market. It makes software development easier and the community is great and friendly. So there are good reasons to choose Arduino over Pi. Maybe the reason why many developers prefer the former is that it's more complicated to work with modern ARM processors of an A family. And the hobbyists won't find it worth learning the details. We can hope for something similar to STM32CubeMX (software for an easier setup intended for STM32 microcontrollers like ARM Cortex-M0… Cortex-M4 models) to appear, so many enthusiasts could switch to Raspberry.

Recently, many interesting things have been going on in the world of single-board computers. Some models emerge, the others disappear. It applies to every market niche, from Arduino to Raspberry Pi and x86-compatible solutions. For example, there was a recent crowdfunding campaign on Kickstarter, the project is called UP Xtreme and it's an Intel-compatible computing board. On the other hand, the development of Galileo, another promising project, was cancelled. Among the devices mentioned in this article, there is a successful example that used crowdfunding: Renegade Elite was funded by IndieGoGo. So keeping in touch with technology trends on crowdfunding platforms and websites is a good way to know about the changes in the single-board computer market.