Hi everyone! In the following review, we are going to compare three popular and affordable desktop 3D scanners using structured light technology. All these devices are ready to work "out of the box", that is, the user who has bought the device can immediately get to work, creating their own projects.

As master models for scanning, we selected four objects of varying degrees of complexity to show the pros and cons of the scanners on different geometry, size, and shape.

The Stamp object has a simple geometry, does not include concavities, holes, and internal channels, which greatly simplifies the scanning process.

Gear has a medium complexity of geometry, as it contains the inner surface of the teeth and the hole.

3-Pole Part is a complex geometric shape, has a pronounced external and internal geometry, which greatly complicates the scanning process.

The complexity of the last object — T-Slot — is represented by internal cavities, concave areas, and holes, which causes a number of problems when scanning.

The table below shows their photos and overall dimensions.

The objects were printed with PLA on the Zenit 3D printer — a simple and reliable device that consistently delivers good results with both small and large objects. All the mentioned scanners were used for the comparison.

Let's take a look at each device, consider the scanning process, and draw conclusions about the quality of results.

The Shining 3D EinScan-SE (Elite) is a next-generation desktop scanner — versatile, lightweight, and fast, featuring great detail. The EinScan-SE is the next generation of the EinScan-S, with a new design and increased performance. This is the easiest-to-learn 3D scanner for non-professional users, ideal for training and subsequent 3D printing of the resulting simple models.

The package includes the device itself, a turntable, stand, calibration field, as well as connection and power cables. 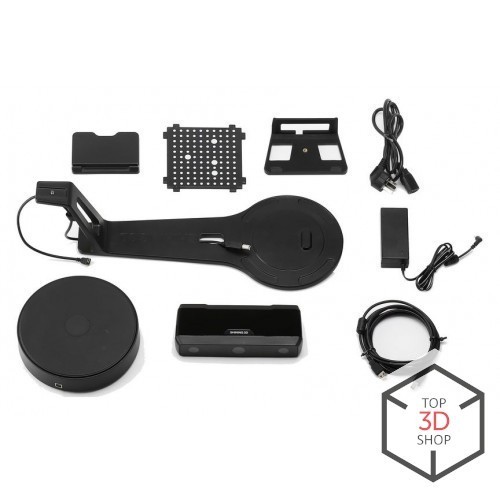 This is the most inexpensive scanner in our review, while it produces a fairly high-quality result. The process of working with it is simple, and the proprietary software allows even an inexperienced user to start scanning as soon as possible. 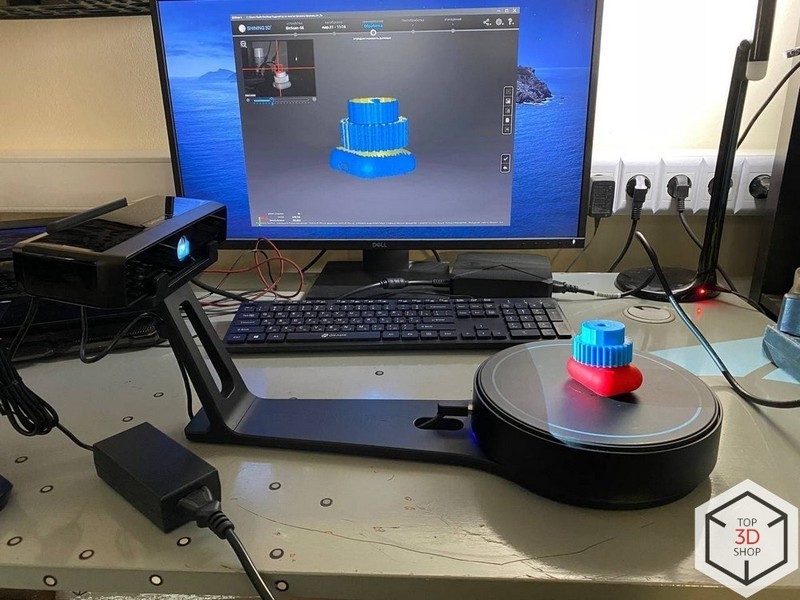 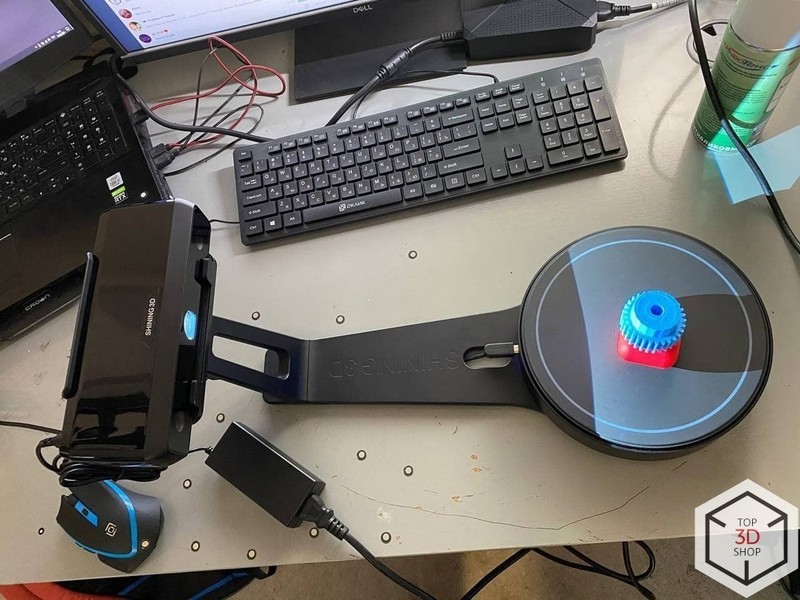 There were no problems during the process of connection and calibration, as well as during operation. This device is designed to work with a turntable, which is installed on a stationary spot on a stand.

The scanner is good at capturing geometry. When turning 360 degrees, the surface of a model is displaced, which can mislead the operator, but after the end of the scanning session, the software automatically “stitches” the scans, so the models are obtained without displacement.

The quality of the final models can be assessed in the table below.

The Shining 3D EinScan-SP (Platinum) is a desktop scanner, too. The device is equally versatile, lightweight, and fast, but it boasts even more detail. The EinScan-SP is primarily intended for 3D designers in the digital environment. It offers modernized features for quickly collecting accurate data, which will be useful in design, animation, archiving, heritage preservation, CG, and VR.

The package of the model practically does not differ from that of the Shining 3D SE, but it contains a tripod, which significantly expands the range of tasks to be performed. With the SE, you can scan large objects in stationary mode by manually moving the object in the scanner's field of view. 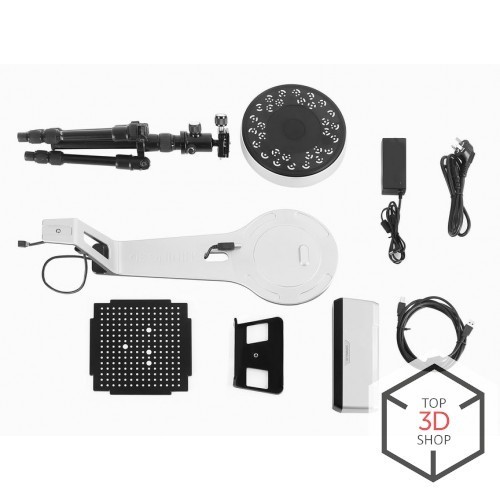 Compared to the previous model, the frame capture time is reduced to 4 seconds (versus 6 sec in the SE), which significantly speeds up the work. The problem of scans being shifted during the scanning process remains, but, as in the previous case, it does not affect the quality of the result — shifts occur only in the process, then the software stitches the scan. 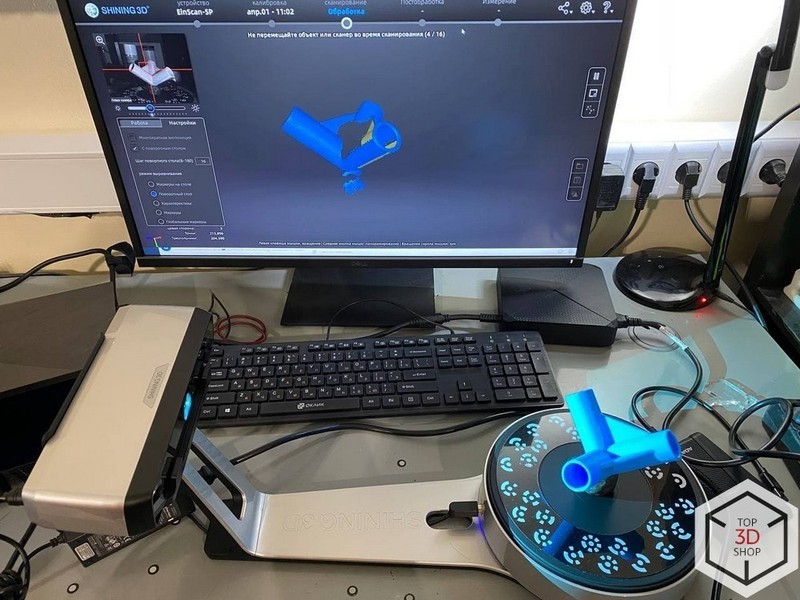 The process of connecting and configuring the scanner does not cause any problems, even a beginner can handle it. The speed of obtaining frames is significantly increased, which simplifies and obviously speeds up the whole work. Also, compared to the Shining 3D SE, the accuracy is increased by 50 microns, and special positioning marks are added to the turntable, which enables high-quality scanning when using the device on the tripod. This solution allows working with large products, and the marks on the table will indicate to the device the location of the table rotation axis for quality stitching of the scans.

The previous device, the Shining SE, does not have a separate tripod and marks on the turntable, which makes it difficult to scan objects whose dimensions are not within the device's field of view.

The quality and detail of the models are at a high level. The scan results are shown in the table below. 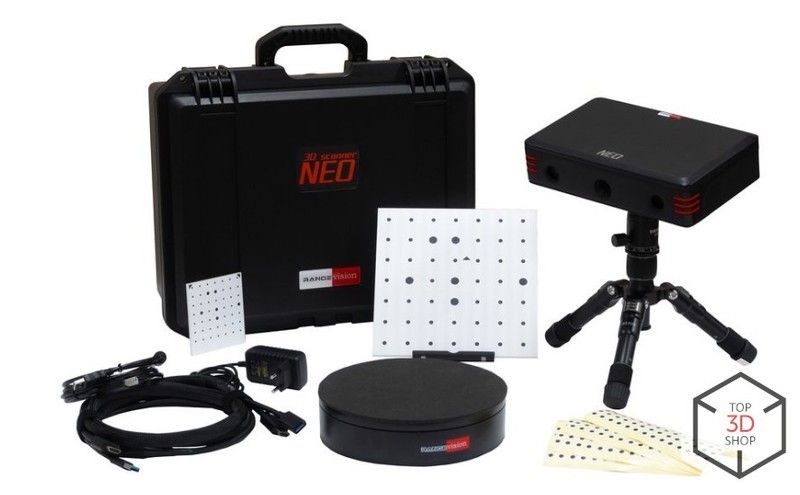 The RangeVision NEO is a new entry-level model from the Russian manufacturer of 3D scanners. Small in size, this scanner is not much inferior to expensive and high-precision RangeVision models in terms of functionality.

The model boasts a decent package kit and comes in a handy carrying case for easy storage and transportation. Unlike the previous devices, the scanner does not have a dedicated turntable stand, but this is offset by a tripod.

The software is also included and has a nice interface that is easy to understand.

There are no difficulties when connecting and configuring the scanner, the software has enough prompts for a quick, proper start.

During scanning, there were no problems with stitching images and capturing geometry. The speed of getting scans is high enough for comfortable and fast work. 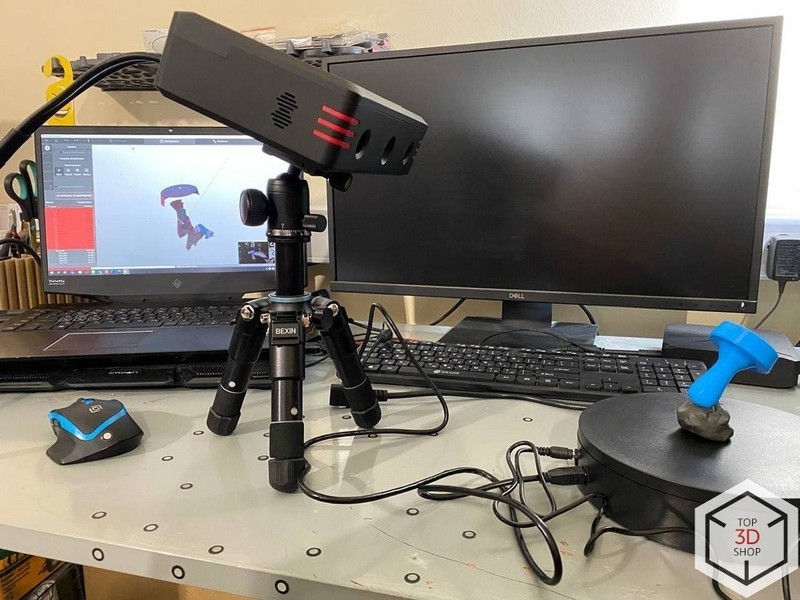 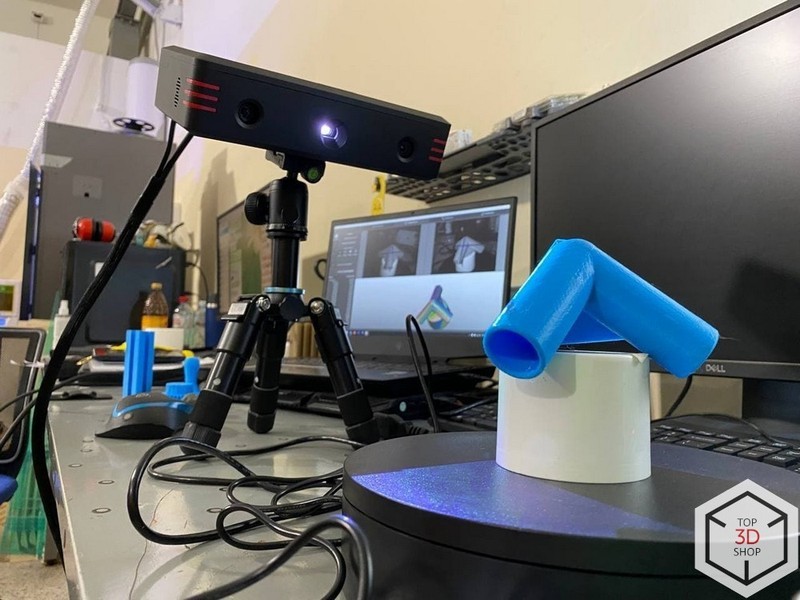 The table below shows the scan results.

Comparison with the reference standard

The master models for comparative scanning were 3D printed. We took the scan results of the RangeVision Pro as a reference since it has a metrological certificate and is a confirmed measuring tool, that is, it is a scanner of a higher class, which can be taken as the reference standard.

The table below compares the RangeVision Pro 5M scans to reference mathematical models. This comparison will show deviations after printing.

The table shows that the average deviations after printing are 0.1 mm. This data will help determine the true scanning deviations when using the Shining 3D SE, SP, and the RangeVision NEO.

The table below compares the scans of each device to the RangeVision Pro 5M reference scans.

As can be seen from the table, in some areas, the deviations are significant — up to 0.5 mm.

This results from incorrect stitching of the object during scanning, due to the repetitive geometry.

The Shining 3D SP scanner performed a little better than the previous model, the geometry is well stitched, the maximum deviations being up to 0.2–0.3 mm.

The device also showed good results: the quality of stitching is high, which makes for minimal deviations — 0.2 mm in comparison with the standard.

Conclusions on the operation of the devices

Each of the scanners performed rather well: the average deviation of the Shining 3D SE scan was ± 0.3 mm, the Shining SP — ± 0.25 mm, and the RangeVision NEO — ± 0.2 mm. As is seen from the comparison, the detailing of all scans is decent.

In terms of usability, they also hardly differ, only the presence of the turntable with Shining 3D scanners often greatly simplifies the process. The RangeVision NEO has only a tripod, which means that you need to manually set the distance to the table and the inclination angles of the device.

It is not possible to choose the best of these scanners, each of them is suitable for its own range of tasks. The differences lie in the size of an object that can be scanned by each of the devices.

Such large objects can be scanned in parts by manually moving the object in the scanning area.

Speaking of the package, the Shining 3D SP has the best set — the device has a stationary stand and a tripod right “out of the box”, while the SE has only a stand, and the NEO provides only a tripod — you will have to buy a turntable separately if you need it.