Hello there and welcome to Top 3D Shop blog – a place where you can learn everything about 3D printing technologies, related equipment, and the latest breakthroughs in the industry. The subject of today’s review is Anycubic Kossel Plus, an FDM 3D printer that is definitely much discussed these days. So, let’s find out what this 3D printing machine has to offer.

To begin with, it is a delta printer produced by a popular Chinese manufacturer that made its name thanks to the production of inexpensive, yet high-quality equipment for 3D printing. Watch this video and continue reading to know more about the Anycubic Kossel Plus 3D printer. 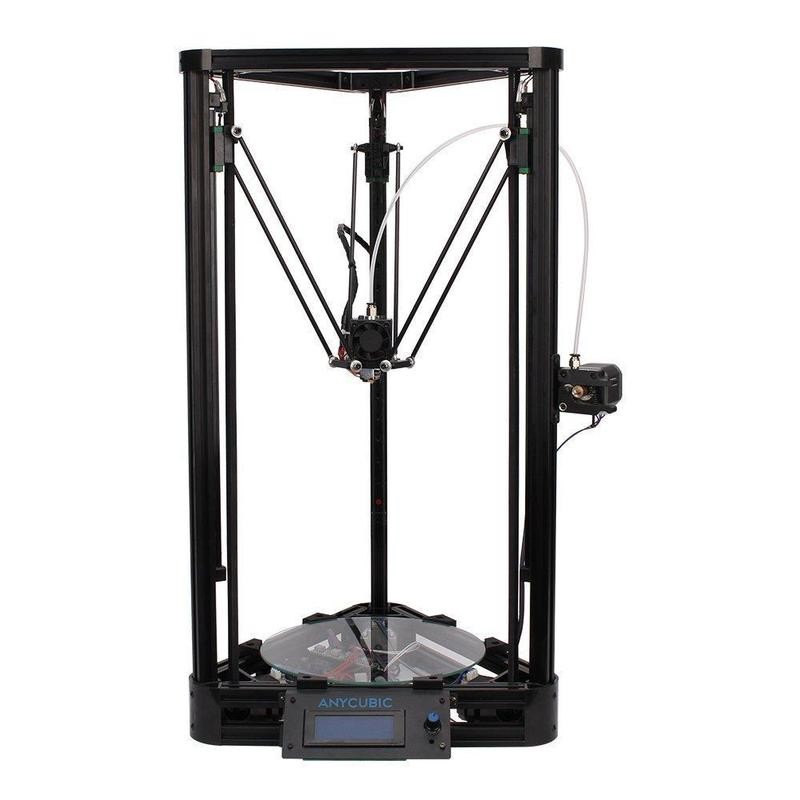 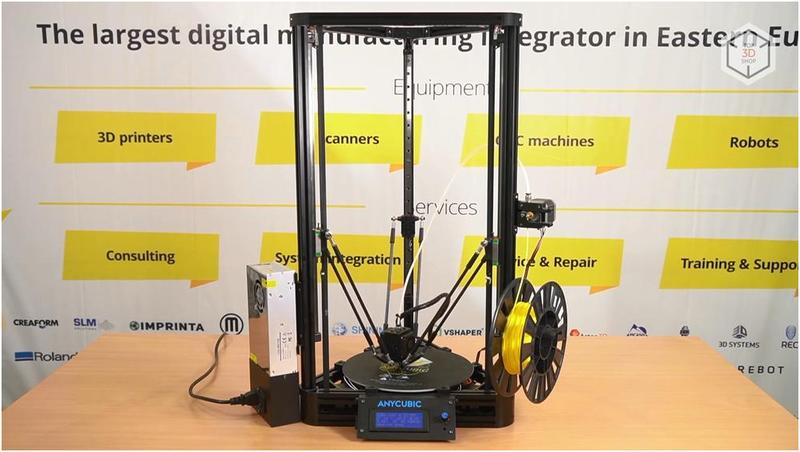 Kossel Plus is an upgraded version of the Kossel Pulley printer. The main differences of the new model – the pulleys were replaced with linear guide rails and the volume of the printable area was increased. 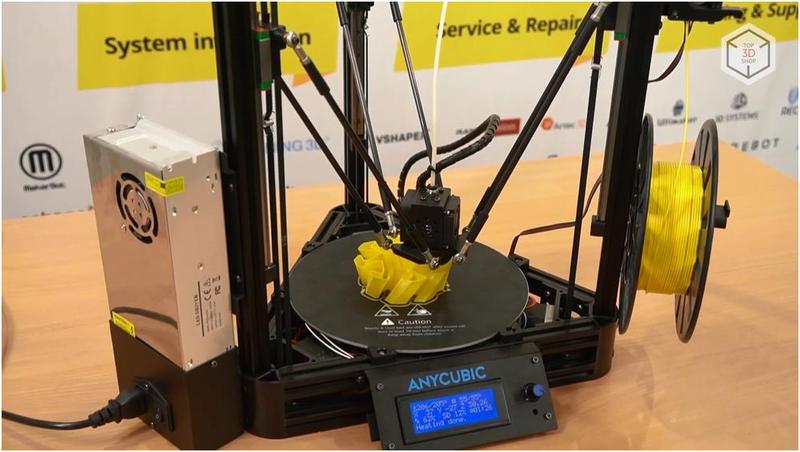 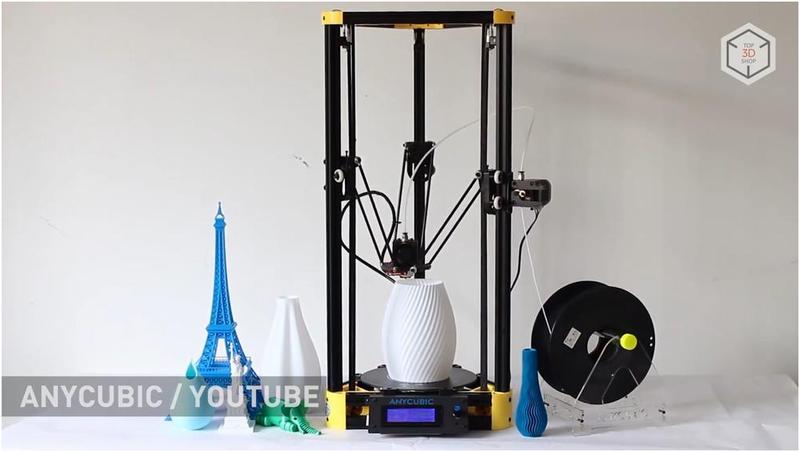 The structural design of the printer with delta kinematics was swiped by Anycubic engineers from the Kossel model that, in turn, was created in 2012 by Johan Roholl as part of the RepRap project. The process of remaking the concept led to the creation of the Kossel Pulley 3D printer, in which levers were moving along the guides on pulleys. 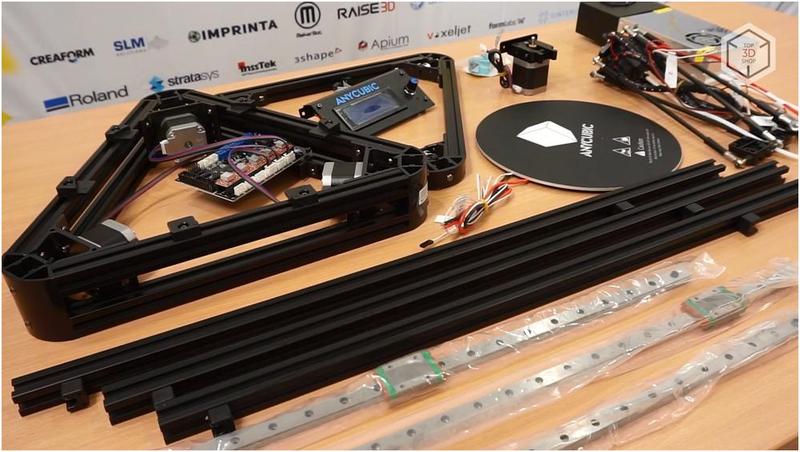 This delta printer is shipped unassembled. The main components are carefully packed in the box and include triangular parts of the frame,  guide rails, a control unit, an extruder with fixed levers, a feeder mechanism, a print bed and a power supply unit. 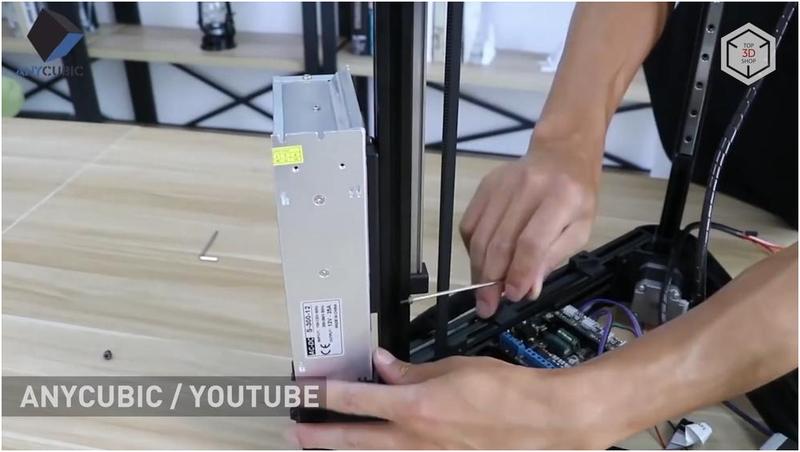 For experienced enthusiasts and professional 3D makers, the whole process of assembling and preparing Kossel Plus for work will not take longer than 2-3 hours. 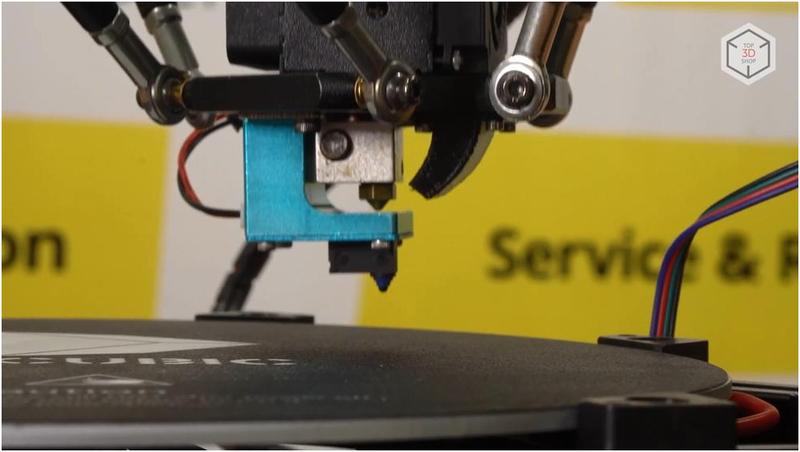 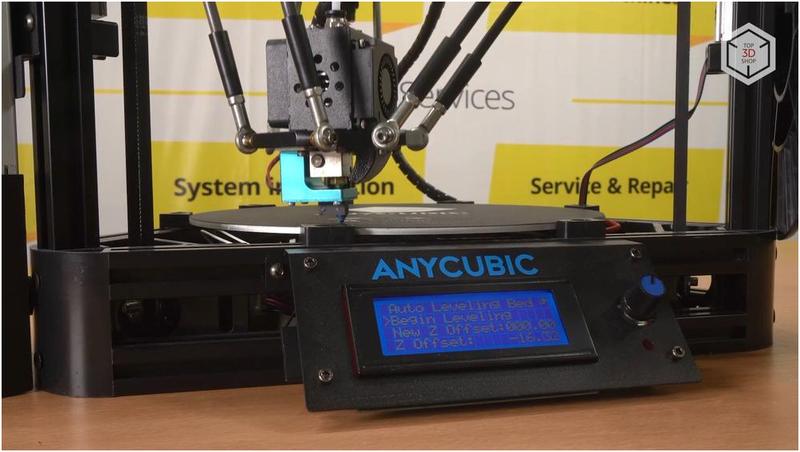 Once the calibration procedure is launched, the extruder with the nozzle passes through 69 points on the platform surface. The measured deviations will be considered by the machine when printing. Along with automatic calibration, there is also the manual process available. 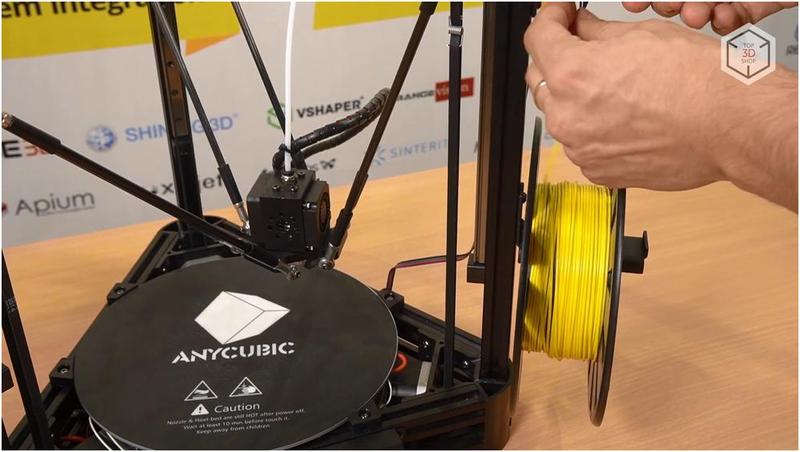 The spool holder is located on the right side of the printer. The filament passes through the feeder, and then through the Bowden tube and finally, gets inside the extruder. 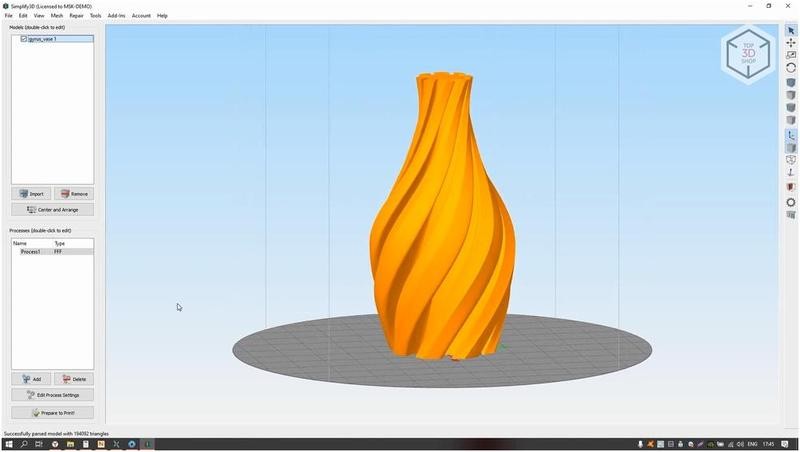 Generally, Anycubic 3D printers come with the Cura slicer. Users, however, can use any other available software of their choice. 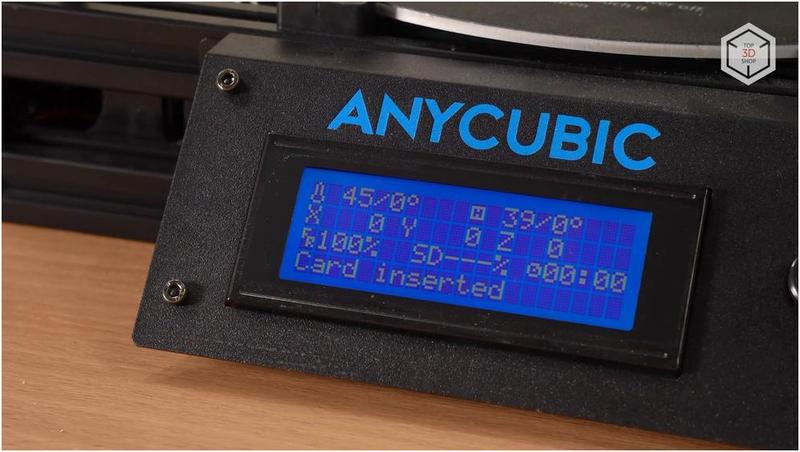 The finished g-code can be exported to the printer either via direct USB connection or through the use of an SD card (the latter is, however, more convenient). 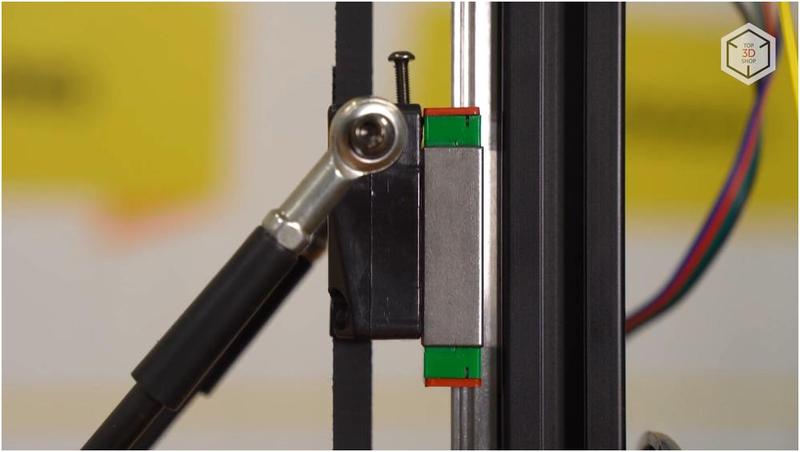 The use of linear rails and the substitution of pulleys significantly enhanced the stability and repeatability of the printing process compared to the previous model.

As the manufacturer claims, such a solution allows you to maintain high printing accuracy under high loads: it helps to reduce wear and tear, and saves a user from a necessity to perform tuning and maintenance chores very often. 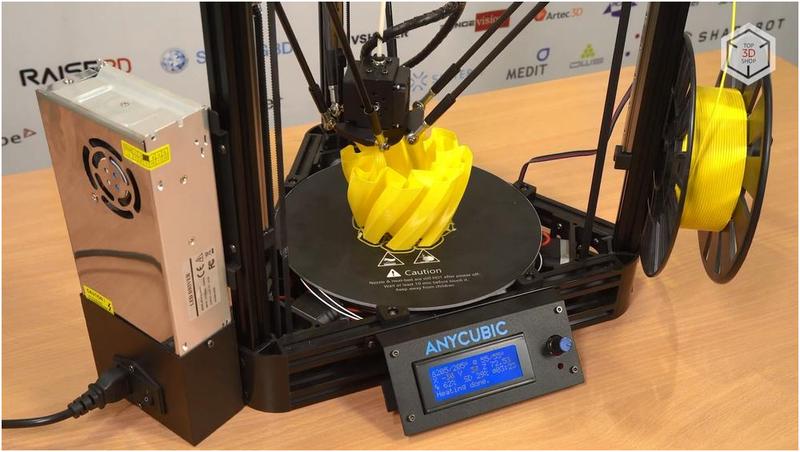 It is believed that such a structural design increases the noise level when 3D printing. Indeed, it makes sense to install Kossel Plus in workshops rather than in living or recreation areas. 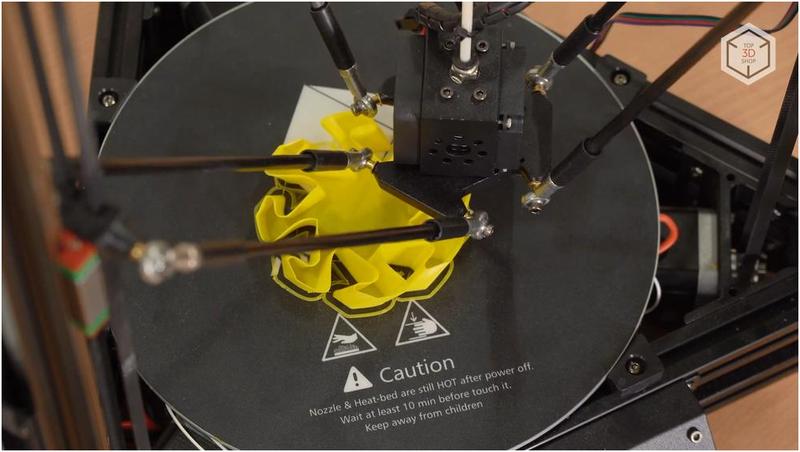 The printing bed is rigidly fixed and heats up to 100 degrees. Unlike in the previous version of the printer, Anycubic Kossel Plus got an increased diameter that now amounts to 50 millimeters. 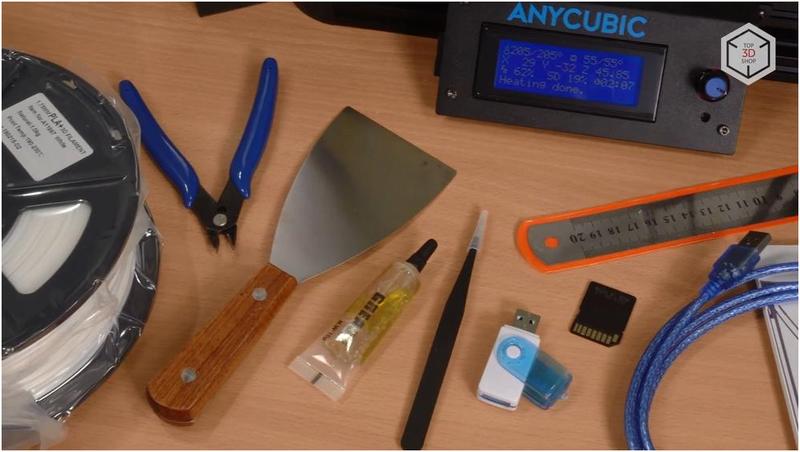 Besides the printer itself, the package contains: a filament spool, a tool kit, grease for guide rails, an SD card, a card reader, a USB cable, gloves. 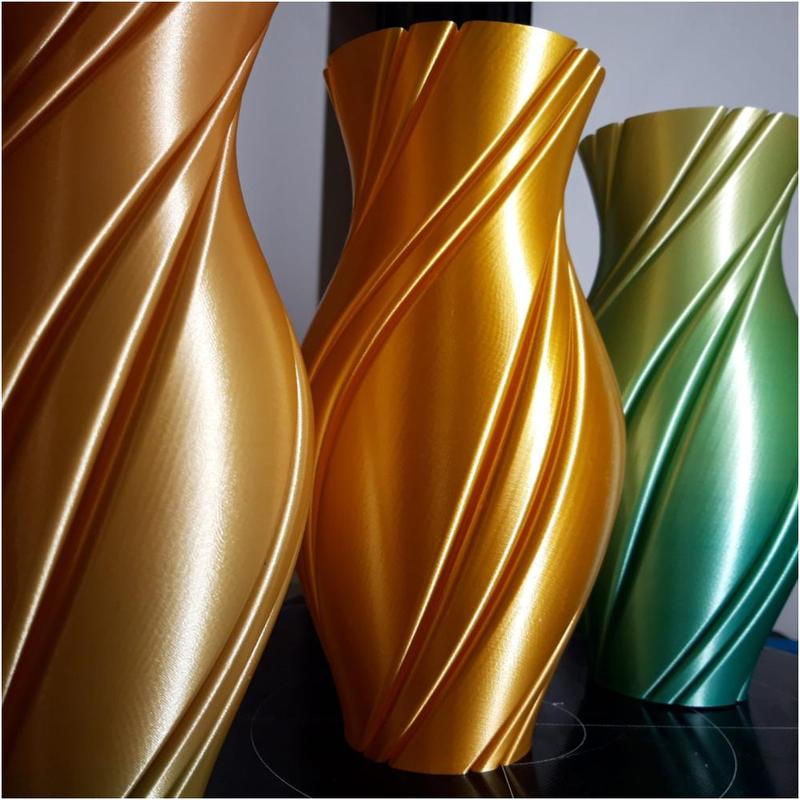 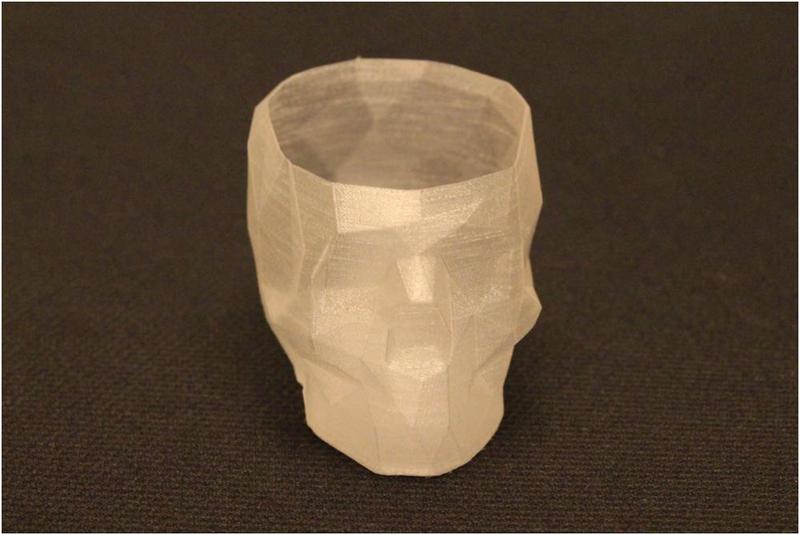 On the Anycubic website, the manufacturer notes that almost 80% of the build work for the printer is already complete. It's true, but potential buyers and users need to consider that delta printers can be a bit more complicated to assemble and configure than classic solutions with Cartesian design. 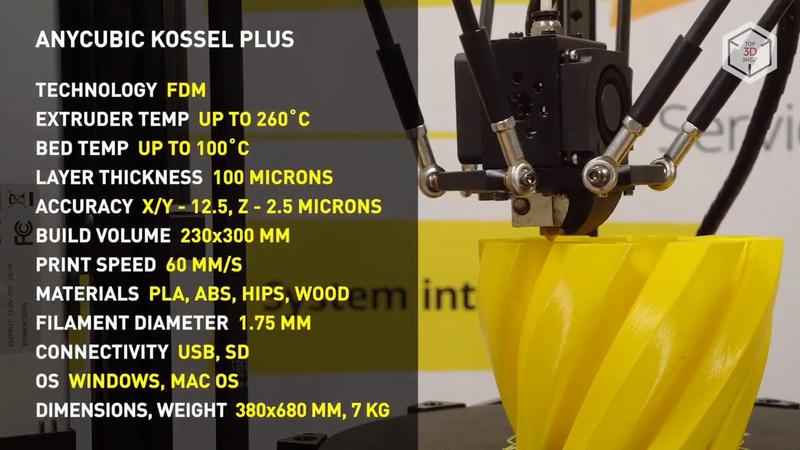 On the whole, Anycubic Kossel Plus is a great solution for experienced makers who need high accuracy and printing stability with good performance and relatively small size of the 3D printing machine.

You can buy Anycubic Kossel Plus at Top 3D Shop.