Hi everyone! In today's review, we will talk about the budget-friendly yet high-quality LCD 3D printer Anyсubic Photon S. The quality of the printed models has proven the feasibility of using the Photon S in jewelry and orthodontics.

Read the article to learn more about the technical capabilities of the Anycubic Photon S and its use cases. 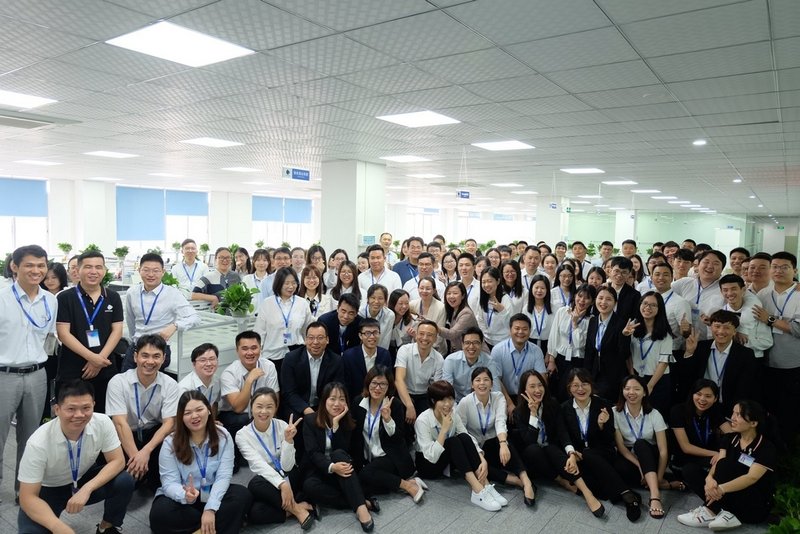 The Chinese company Anycubic headquartered in Shenzhen is relatively young — it was founded in 2015. The brand was created by two school friends. At the time, James Ouyang had a Ph.D. in chemistry from the University of Auckland (New Zealand), while Lu Ouyang was engaged in the production of spare parts for popular DIY 3D printers in China. Together, they decided to produce cheap and reliable printers capable of being assembled even by novice enthusiasts. 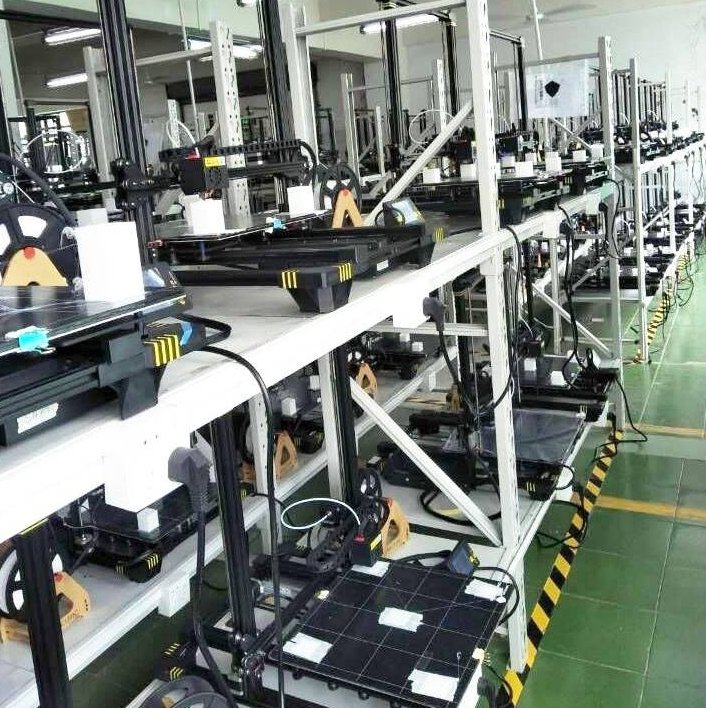 It is only FDM models that can be assembled from spare parts, owing to them not having complex optical equipment. However, specialists from Anycubic understand that plug-and-play devices are rapidly gaining popularity — devices that are ready to use after minimal setup. The company already produces a line of affordable Photon LCD printers, in particular the Anycubic Photon Zero, one of the most affordable resin printers on the current market. 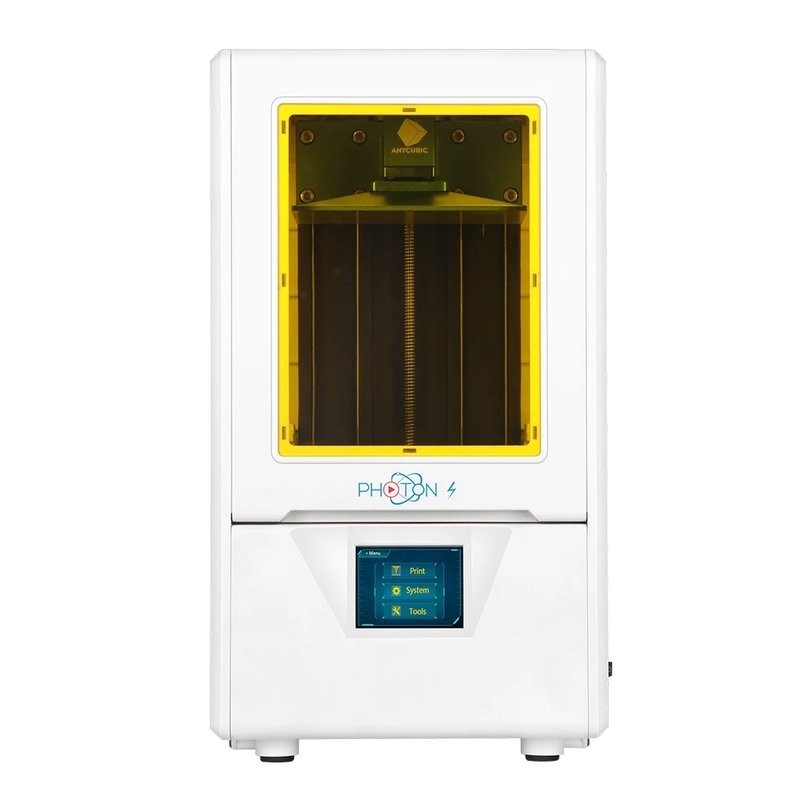 The affordable Anycubic Photon S resin printer is at the top of the Photon LCD product line. Compared to the younger Anycubic models, it has a more advanced optical system and a larger build volume. Ideologically, the model differs from all devices released by Anycubic. Here the manufacturers took into account not only the technical aspect but took care of the design of the printer. The device looks like a modern gadget. And, rare as it is among 3D printers today, there are two versions with a white and a black frame available to users.

The volume of the Anycubic Photon S build chamber is 115 x 65 x 165 mm. The minimum thickness of the printed layer is 0.025 mm. The 2560 x 1440 pixel LCD provides an XY resolution of 47 microns, the level of precision you would expect to see in printers in the higher price range. Another sign of a high-quality device is the operation of UV LEDs, which are responsible for the polymerization of printed materials. The Anycubic Photon S is equipped with a matrix light source that provides a uniform light flux across the entire surface of the bed. The printer implements an original function allowing you to simultaneously print eight identical models with different levels of exposure at the same power. This enables the user to set the optimal exposure time when choosing a new resin.

The Anycubic Photon S printer is notable for the ease of use, high print accuracy, and compatibility with a variety of resins. It is suitable for both beginners and experienced professionals in manifold industries. Designers, orthodontists, and jewelers are the main target groups of the Anycubic Photon S. Considering its cost, the Anycubic Photon S can be recommended as the first resin printer for aspiring craftsmen, as well as the equipment for educational institutions.

The Anycubic Photon S printer comes fully assembled. In addition to the device, the box contains a build plate, a resin vat, a screwdriver and a hex key, a USB flash drive, a power cable, a USB cable, a funnel, gloves, a scraper, and the user manual.

To prepare the device for use, you only need to check if the interior of the printer is free of dust and calibrate the machine. The conventional leveling method by using a sheet of paper is straightforward and requires no special skills. Calibration is performed in a few simple steps: loosen the screw of the bed next to the fixing bolt, put a sheet of paper on top of the control unit, move the Z-axis to the lower position via the printer menu, lower the plate step by step so that it keeps the sheet of paper in place. Tighten the screw, select Z = 0 in the menu. Now you can place the vat back into its position, pour in resin, and start printing.

Slicing layers and adding support is performed with the proprietary Photon Workshop software, which is available in versions for Windows and OS X. The program's interface is no more complicated than that of Paint. The capabilities are minimal but sufficient. The user sets the thickness of the print layer, the exposure time, and manually adds supports for the model. 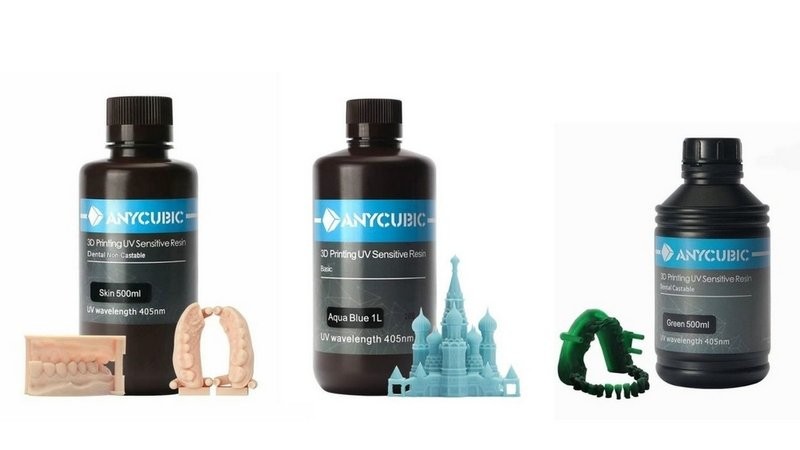 The Anycubic Photon S has proprietary resins from the manufacturer that solidify in the UV range (405 nm). You can use materials by other brands intended for the same wavelength. 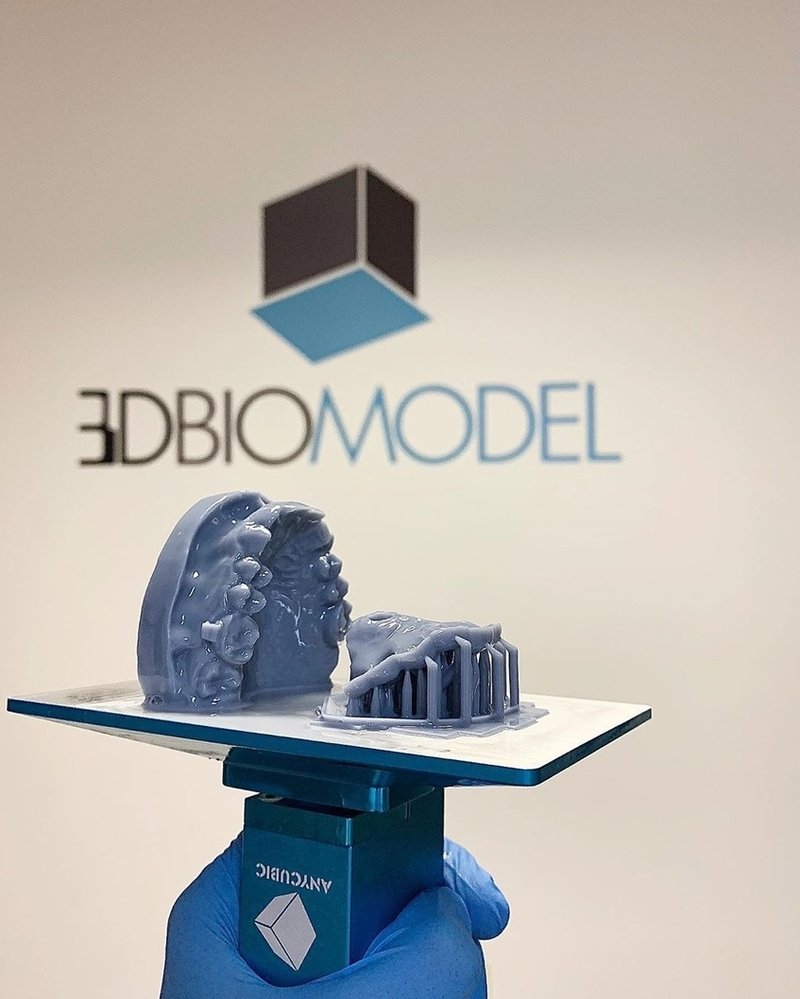 The Italian company 3DBioModel used the Anycubic Photon S printer to create jaw models needed for the work of orthodontists. The volume of the 3D printer's chamber is suitable for making multiple records. The printing accuracy is enough for the quality execution of projects of this type. 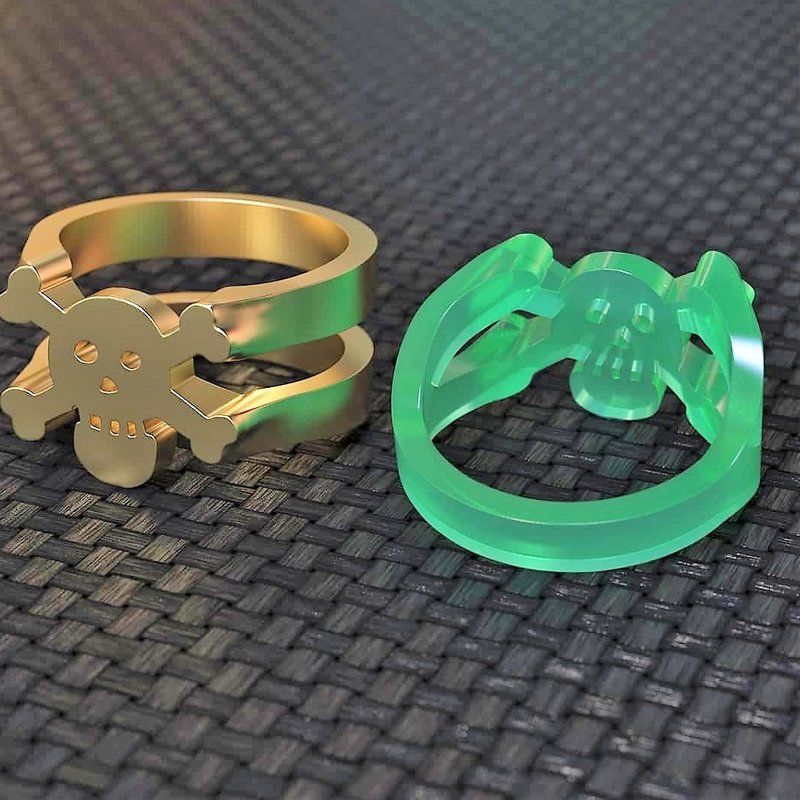 Affordable LCD printers like the Anycubic Photon S are a cost-effective solution for small jewelry workshops. The low cost of a printed model allows creating many prototypes until an optimal result is obtained. 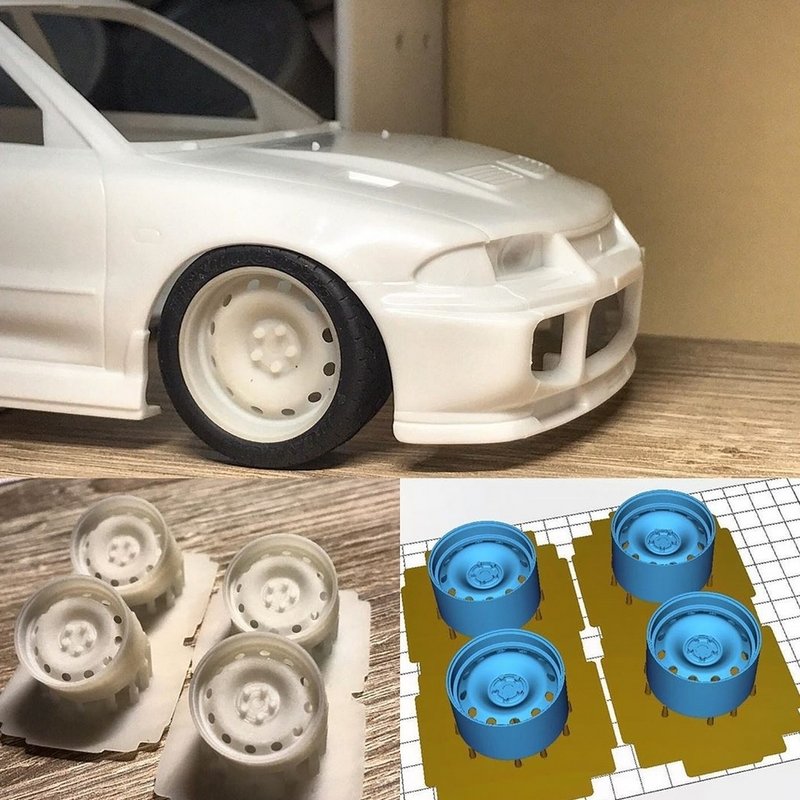 The creation of large models has always been an extremely complicated job, which required a great deal of time and/or various complex equipment. Employing the Anycubic Photon S 3D printer simplifies the task drastically. The user just needs to draw a project in a CAD program and get the printing process started. Then it is possible to make exact miniature copies of cars, ships, and planes. 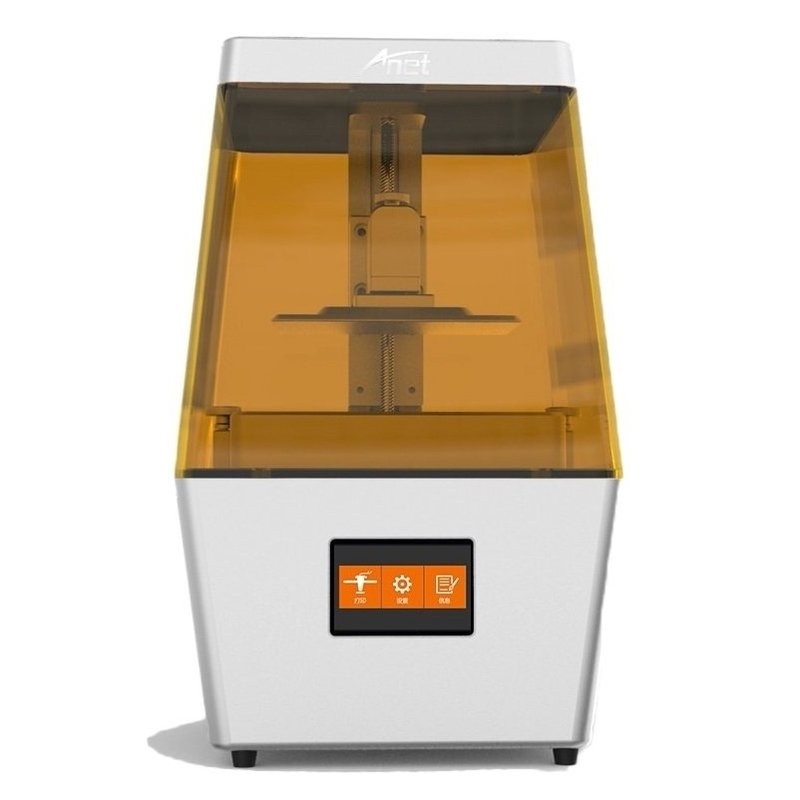 Low-priced resin printers are very similar in technical characteristics and, accordingly, in the quality of printed products. One of the competitors of the Photon S model is the Anet N4. This machine is equipped with an LCD panel with the same resolution as that of the Photon S. Given the identical dimensions in the build area, the models provide the same XY resolution. Nonetheless, the Anet N4 has a simpler UV light source: from the LEDs located in the center, the light spreads over the entire area of the printing bed. 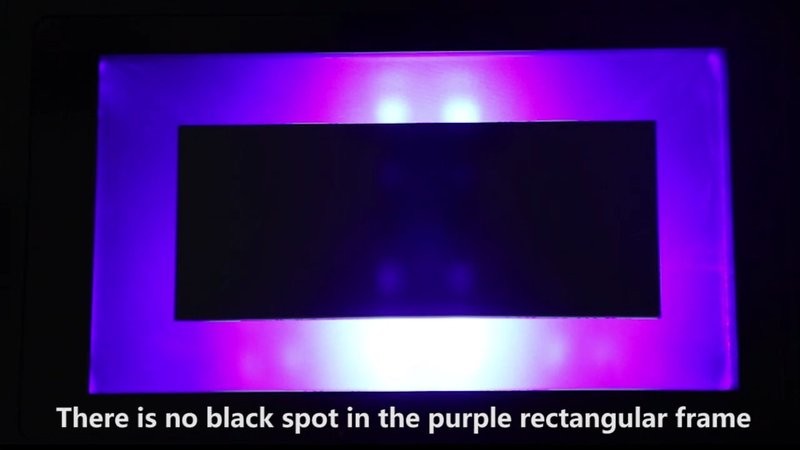 Structurally, the Anycubic Photon S is closer to professional devices than the Anet N4. Besides, the former creates printed layers half as thick.

The key specifications of the two printers are shown in the table.

As you can see from the comparative table, the Photon S is slightly different in print chamber dimensions and outperforms the N4 in layer thickness. It is also a little more expensive. The rest of the specs are roughly the same.

Let's summarize the main advantages and disadvantages of the Anycubic Photon S.

The combination of features and price of the Anycubic Photon S gives it the ability to print products that will satisfy the most demanding users at quite a reasonable price, competing on an equal footing with more expensive models by other manufacturers. Since the Photon S is compatible with various types of resins, the device is suitable for designers, jewelers, design engineers, and dentists — prosthetists, dental technicians, orthodontists.

Buy Anycubic Photon S from Top 3D Shop and get the original quality equipment, an official warranty, and the best service possible.