AutoCAD by Autodesk is a commercial 2D and 3D CAD software available for macOS and Windows. Its desktop version was first released in 1982, making it likely the first CAD software available for personal computers (there are older programs but they were only available for mainframe computers at the time). AutoCAD has quickly gained popularity and recognition and is still very popular among professionals and hobbyists alike. It’s considered to be an industry standard for engineering, architecture and graphic design and others.

AutoCAD has impressive functionality and a seemingly never-ending amount of features. It’s actively supported and there are even mobile versions. But being a popular commercial software, it should not surprise anyone that the program is not cheap.

Does the free version exist? Well, there is a student license available for students, covering all of the Autodesk subscription family. The free trial version of AutoCAD also has a full amount of features. For those who want to pay but don’t have enough money for the full version of AutoCAD, there’s a more limited but much less expensive version called AutoCAD LT.

And finally, there are enough 2D and 3D CAD programs on the market. Some of them could end up being a useful alternative for you.

Features and capabilities of AutoCAD 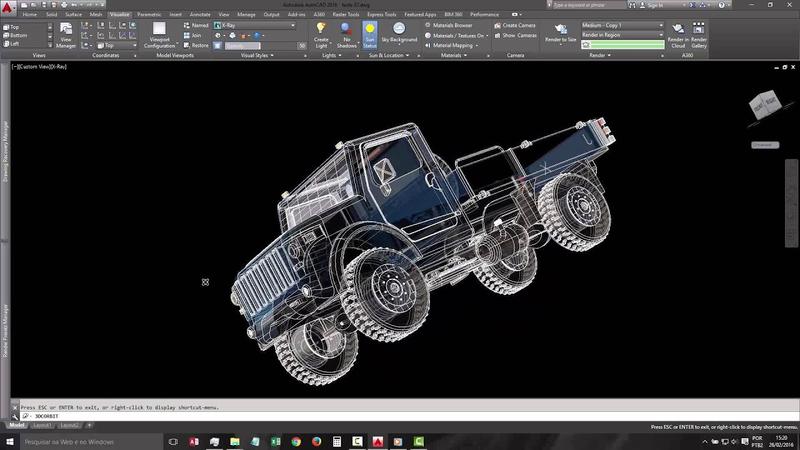 The first version of AutoCAD was released almost four decades ago, so the developers had enough time to pack the program with the features and assure an impressive level of stability.

The program boasts a wide range of 2D and 3D features. It fully supports parametric modeling, witch allows users to modify their designs significantly by changing constraints within the means of seconds. Applying point clouds to the objects is supported, and there’s a powerful rendering engine that provides photorealistic works. If your computer is not powerful enough to check the whole potential of said engine, you can render the objects in the cloud. AutoCAD can also automatically generate 2D drawings from your 3D models.

2D features are also outstanding. Dynamic blocks make the drafting process much more flexible and parametric constraints allow a deeper level of geometric integration between the parts. There’s a powerful spreadsheet editor that is compatible with Microsoft Excel. Revision clouds give you an ability to quickly identify the updates to your design.

The latest 2020 version gets some useful features as well: such as cloud storage connectivity, dark theme for UI and performance improvements.

It should be mentioned that there are some differences between the Windows and macOS versions of AutoCAD, you can learn more about those on this page on Autodesk’s website.

Here’s one of the tutorials available online, covering the basics of AutoCAD:

A 30-day free trial of AutoCAD can be downloaded from Autodesk’s website. This version is not limited functionality-wise and allows you to get a taste of all of the features of this software.

The downloading process consists of a few clicks and entering some information or signing in to your existing Autodesk account. Start with the “Download AutoCAD” for free button, choose your OS and follow the steps.

A student or a teacher can download the educational version of AutoCAD for free and use it for 3 years (it can be installed on two devices). The steps require you to go Autodesk Education Community, choose AutoCAD, create an account or use your existing Autodesk one if you can. After choosing the version, OS and the language you can install the software and enter the serial number which would be sent to your email privately. 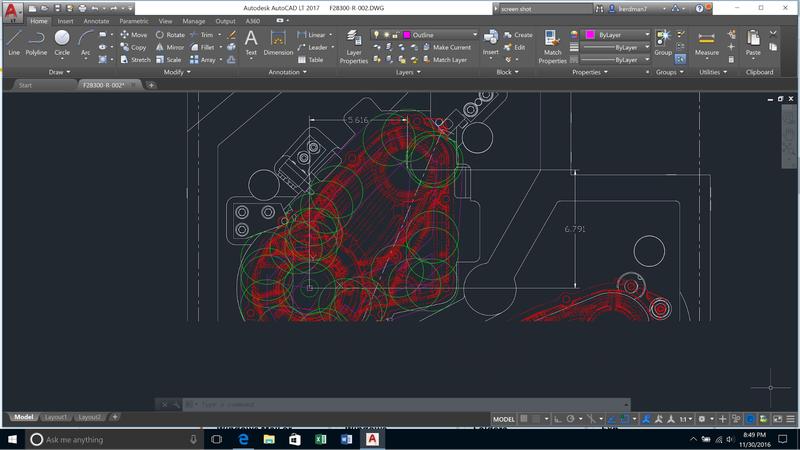 AutoCAD LT is a significantly cheaper ($400 per year) and a more limited version of Autodesk AutoCAD.

The main differences are that AutoCAD LT lacks 3D features and the ability to extend its functionality with the plugins. There’s also no multi-user licensing.

You can check this comparison on the official website covering the differences. 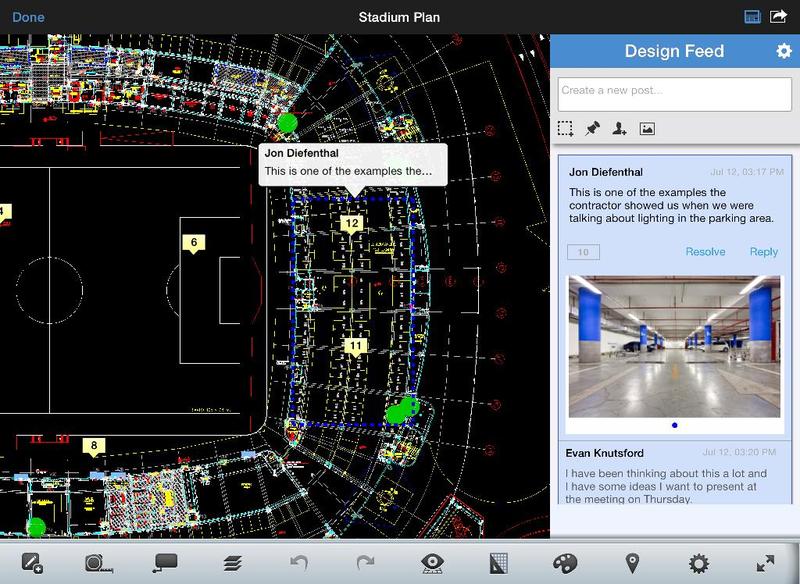 AutoCAD 360 is a free mobile version of AutoCAD. It can’t be compared to the full version, but it’s more than just a viewer. It has cloud-sharing and collaborative features, and also give you the ability to open and view DWG files and make measurements.

There exists the Pro version which costs $5 a month. It provides some editing and scaling abilities and also allows you to draw the objects. 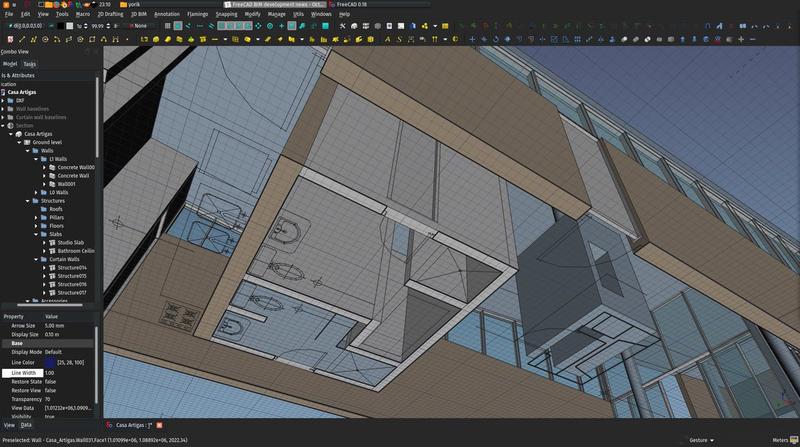 FreeCAD is free, open-source and cross-platform. It's one of the best 3D CAD programs you can get without paying money, yet it still manages to rival expensive commercial solutions.

The interface might not have the same level of polish as AutoCAD does, but it's still functional and the learning curve should not be too steep for anyone familiar with other CAD programs. FreeCAD supports full parametric modeling and all of the modifications to your objects are just a few clicks away and using the timeline feature significantly helps. There are various simulation abilities, including a robotic arm simulator and a module covering the CAM functionality. The 2D tools are extensive as well, they include a sketcher and a 2D constraint solver. Various file formats are supported.

As is the case with many open-source and community-driven projects, everything is extendable and modifiable. Several plugins and workbenches help with adding the features that are not natively present.

FreeCAD might not be the easiest to use solution but it's one of the most powerful free CAD programs out there. The active community and good documentation also provide help to new (and experienced) users with their problems.

You can watch a tutorial covering the drafting process in FreeCAD here: 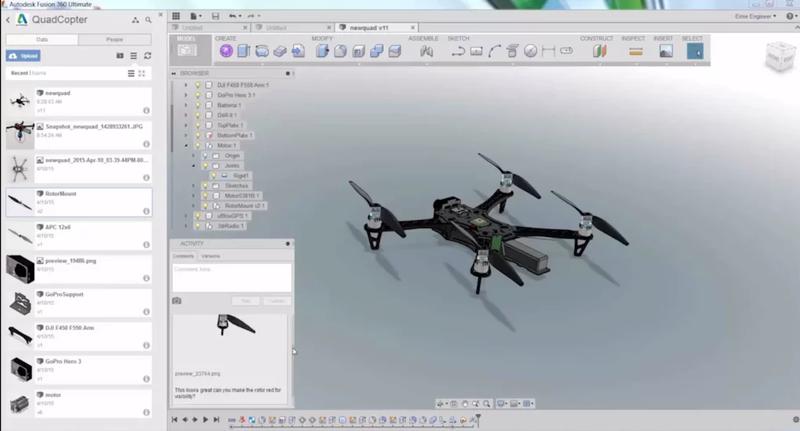 Fusion 360 is a 3D CAD software available for Windows and macOS, similarly to AutoCAD it's developed by Autodesk. It has powerful parametric modeling abilities: there’s even a robotic simulator. Shape optimization also works wonders for simplifying the design and removing the unnecessary parts. The 2D features might be lacking compared to AutoCAD, but the 3D abilities make up for that.

Being cloud-based, Fusion 360 provides some useful solutions for working as a team. Cloud-rendering makes the process faster and your team can even check the models using their smartphone or tablet (although they can’t edit and work on them).

Fusion 360 is not technically free but small startups and independent hobbyists can use it without paying.

Here’s one of many tutorials that cover the drawing abilities of Fusion 360: 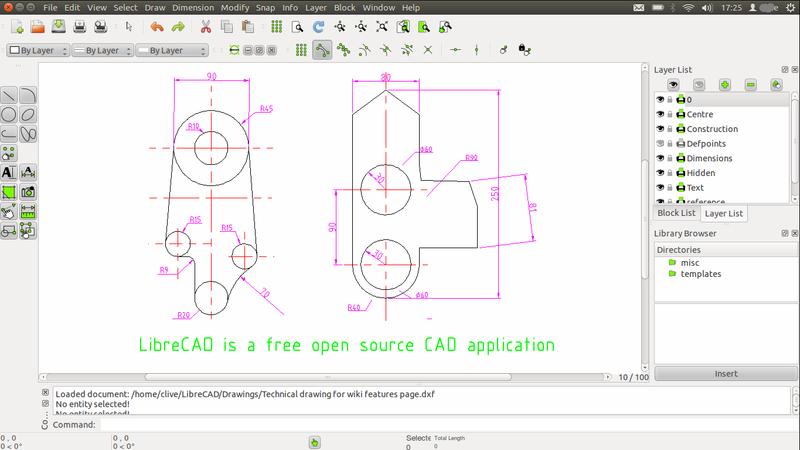 LibreCAD is a free, open-source and cross-platform 2D modeling CAD. It’s a fork of another CAD program named QCAD but there are differences. The features include polyline tools and an advanced snapping system. Isometric view is supported and the software abilities can be extended with many different plugins. It’s also one of few programs that can read DWG files on Linux, although the export isn’t available due to the incompatibility of the format with the software’s license (LibreCAD mainly uses DXF for importing and saving). The software doesn’t support 3D editing and viewing, it’s 2D only.

Watch a tutorial to gain an understanding of the basics of LibreCAD: 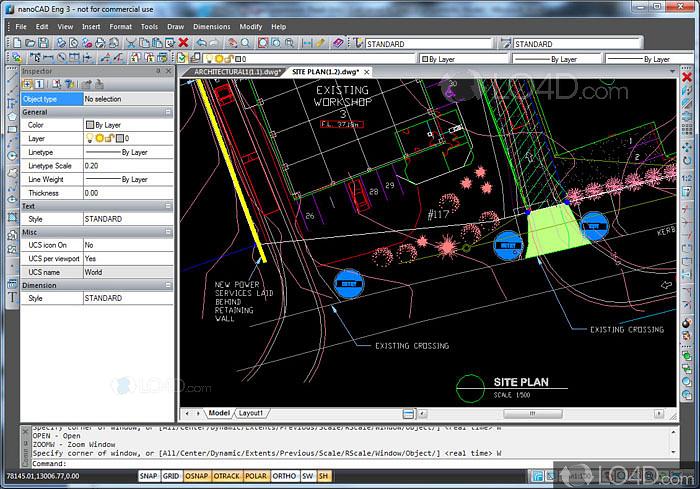 nanoCAD is a 3D CAD software available for Windows. Its basic version is free (there's a paid professional and more powerful version called nanoCAD Plus that costs $180). The interface is designed to be very similar to AutoCAD which simplifies switching for those who are used to work Autodesk's solutions. But it's useful to those with little to no experience – everything is clean, well-organized and simple.

Regarding the features, nanoCAD's tools are powerful: there's DWG support, and 3D and 2D works can be edited with a few clicks. Extended plotting is supported, and there's a spreadsheet editor similar to the one used in AutoCAD. Other than that, the program's API is open and based on C++ and C#. The software's abilities can be extended by various plugins and everything is free to use and share. 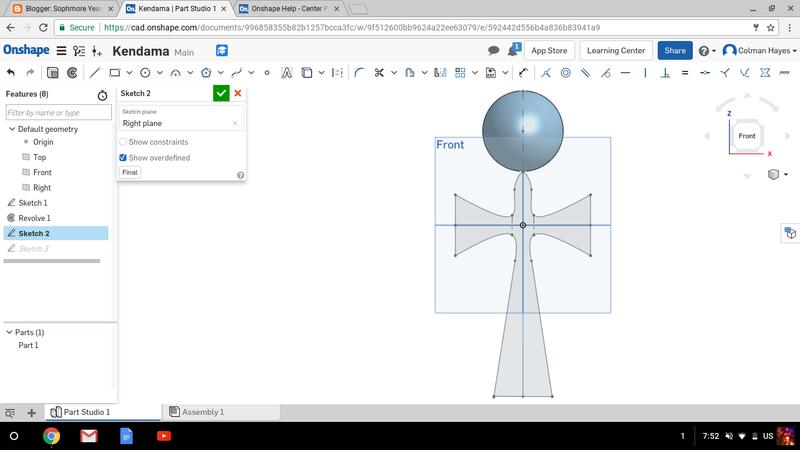 Onshape is a web-based CAD software. It's a powerful all-in-one package with the enterprise-grade solutions. The program makes sharing and collaborative work significantly easier due to its cloud-based design. There are impressive abilities related to teamwork – such rare features as, for example, sharing the same CAD workspace and data simultaneously with multiple users. Being web-based, you can access this program from any device with access to the Internet – and this includes even smartphones and tablets (fortunately, there are dedicated apps available for both iOS and Android platforms).

As for other tools: you can enjoy the full set of features related to parametric modeling, dynamic and kinematic analysis. There are comprehensive 2D tools for sketching. Simulation of complex assemblies is also available.

Onshape is a paid software but there's an educational license available free of charge. Moreover, you can use it for free but you will be required to use it for public open-source projects only. If you want your designs to be private – you have to pay.

The basics of sketching in Onshape are covered here: 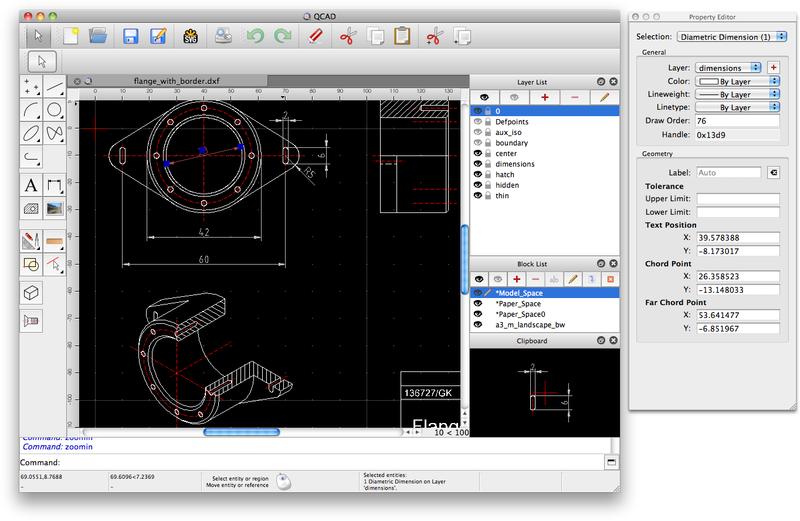 QCAD is a free and open-source (although some of its plugins are proprietary, and there’s a paid version with more features available) 2D CAD software. The interface is simple and clean, although some might find its design dated. The software is focused on technical drawings. The features include NURBS and polylines. The isometric view is also supported and there are many different CAD fonts and modification tools. Various selection modes simplify working with your drafts significantly. Many CAD parts are available for free as add-ons.

Unfortunately for those who don’t plan on paying money, many of QCAD’s features (such as DWG and SVG export) are only available for a paid version. But even the commercial edition called QCAD Professional is quite inexpensive compared to many other paid CAD programs – it costs just $38.