Pimp My Ride: How We 3D Scanned a Rolls-Royce Wraith

What this article is about

In this article we’ll talk about 3D-scanning vehicles for tuning and customization, using a recent order to scan a Rolls-Royce Wraith as an example.

We’re often called upon to scan cars and car components. Not long ago we were asked to scan a whole Rolls-Royce Wraith for a tuning shop in Saint Petersburg. 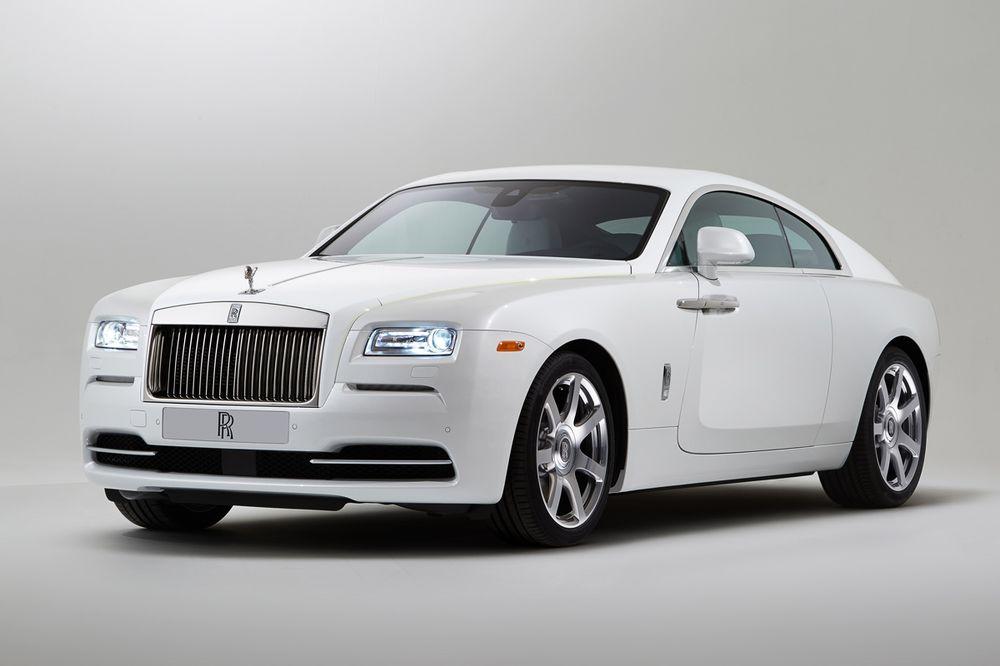 Our task was to scan the car’s entire body and create a digital model for a designer to use in creating custom parts.

We decided to use a handheld Artec Eva 3D scanner. 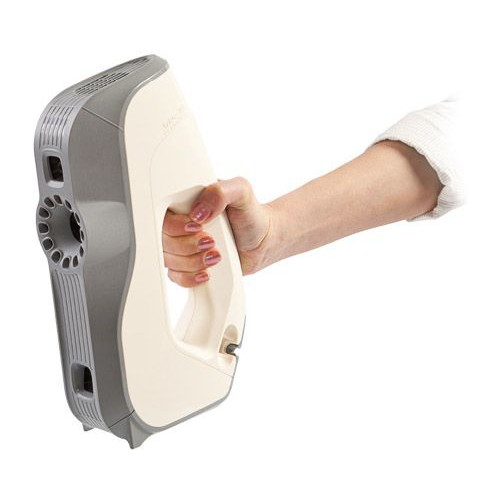 We could have used the tripod-mounted RangeVision PRO 5M scanner for greater accuracy, but for large objects a handheld scanner is a much faster solution, and the Artec Eva easily provides the required surface accuracy of one or two millimeters.

To put the element of speed into perspective, scanning with the handheld took around three hours including preparation time. With a tripod-mounted scanner the whole operation would have taken around six or seven hours.

Incidentally, we stock a wide range of 3D scanners at Top 3D Shop and we’ll be happy to help you choose one that fits your needs. 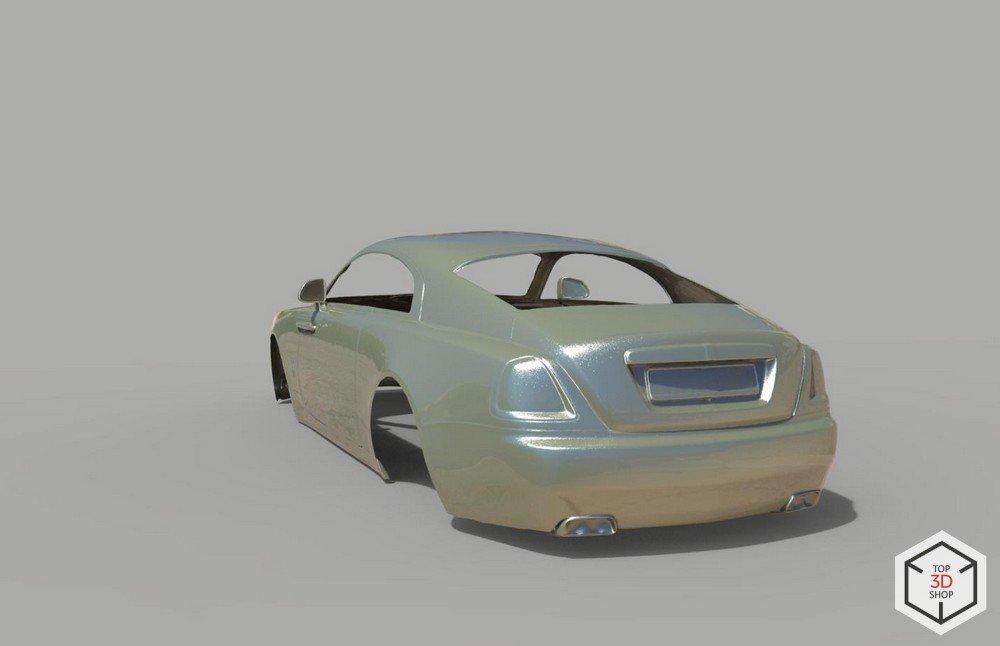 A digital model generated from the 3D scan.

How digital 3D models used to be made

Before the advent of 3D scanners, digital models of three-dimensional objects were created manually in CAD software using blueprints, measurements and photographs as references.

Photogrammetry wasn’t used in automotive tuning and repair for the simple reason that it was too expensive and labor-intensive. Everything was done “by eye” using manual measurements and physical casts of actual parts, which didn’t contribute much to quality.

The appearance of 3D scanners brought the digital revolution to the industry. 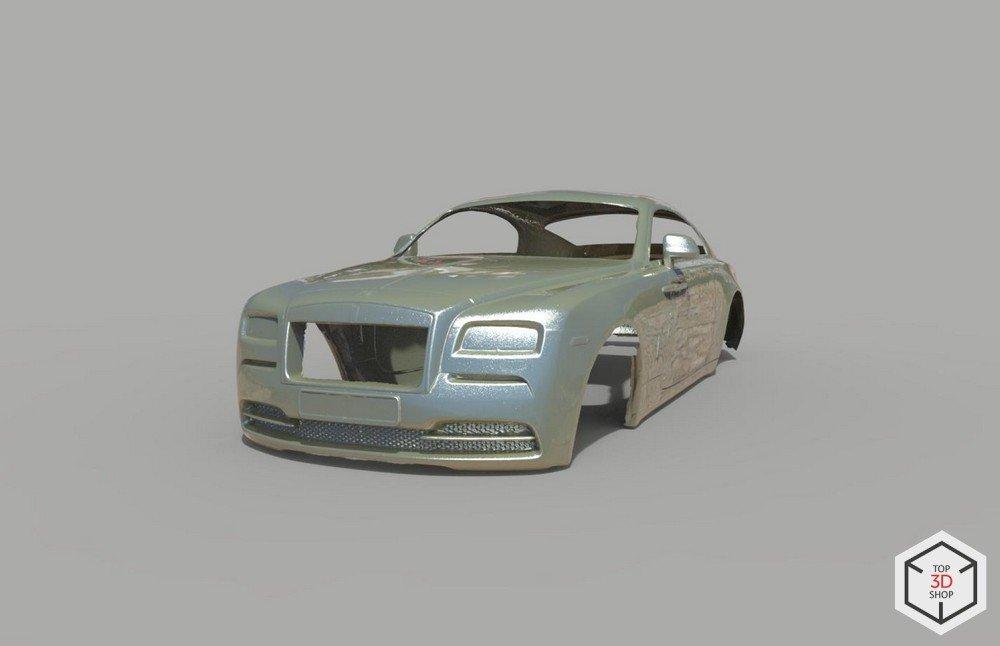 We carried out the scan indoors at a repair shop. Scanning in daylight isn’t the best option, since excessive or inconsistent brightness can interfere with the process.

Nonetheless, we could just as easily have done this scan outdoors. The Eva scanner has its own target illumination system that evens out lighting inconsistencies, and the sunlight that day wasn’t bright enough to compete with it.

The car was delivered to the shop and we set about giving its bodywork a light dusting. We decided not to wash it beforehand; we needed a matte surface anyway, so the additional presence of some road dust was in our favor.

Had there been any significant dirt spatters we would have washed those off to avoid geometrical misalignment of the body surface. 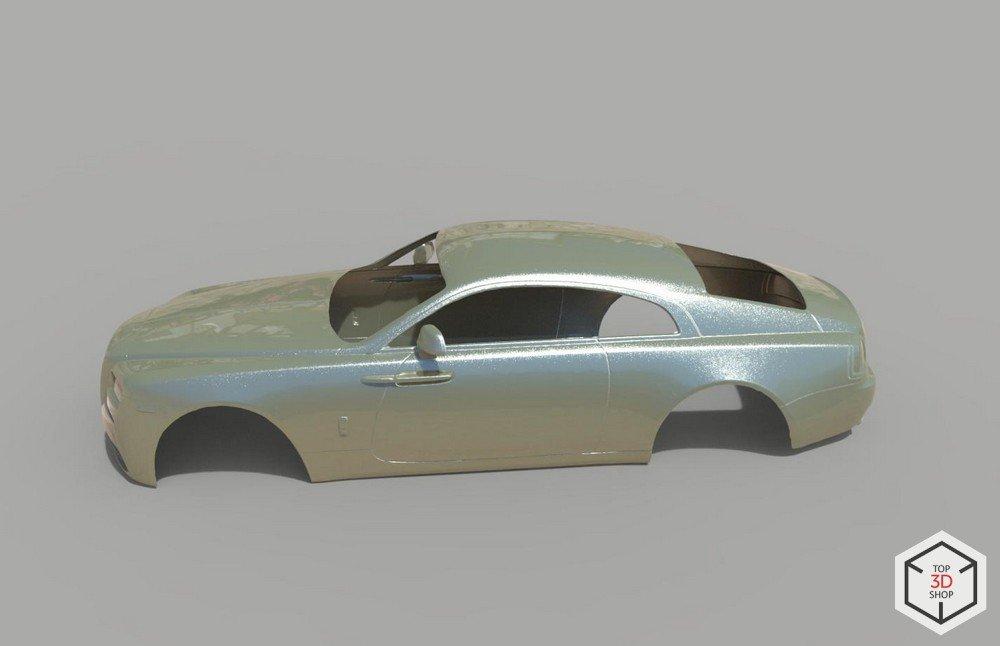 Scanning requires just two 220 V mains power sockets: one for a laptop and the other for the scanner. The scanner connects to the laptop via a single USB cable. 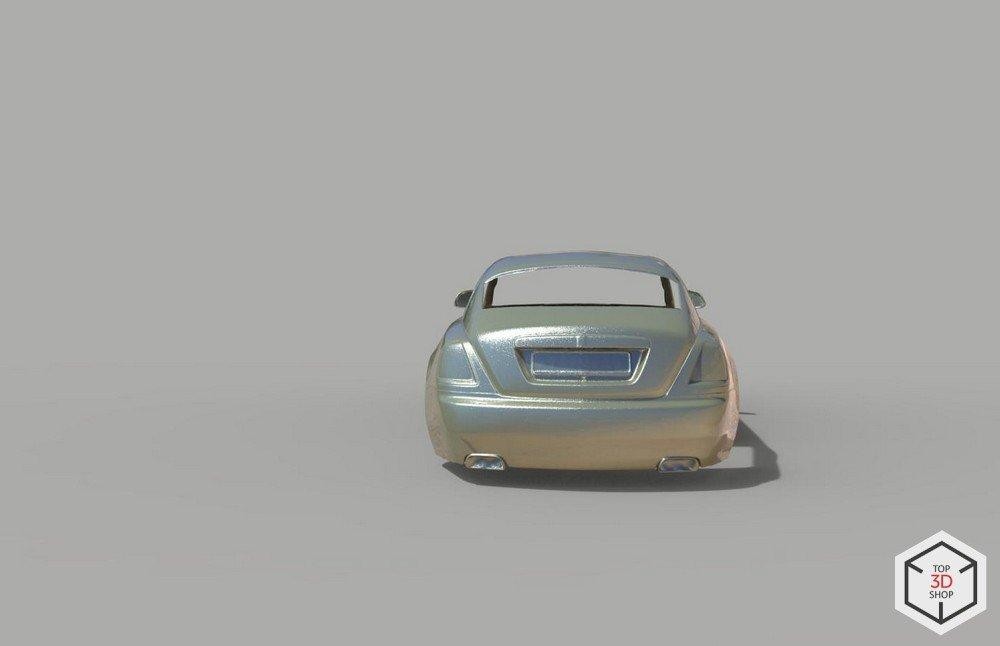 Cars are symmetrical, so we only need to scan one half, lengthwise, and the full width of its front and rear fenders. It’s quicker and easier to build a full model by mirroring a half-scan in post-processing than it is to scan the entire car all round. We scan the full width of the fenders in order to accurately determine the longitudinal axis of the vehicle.

We dusted the car all over with a thin coat of Helling anti-glare spray to suppress reflections that would otherwise interfere with the scan. The spray uses an alcohol base to deliver a talc-like substance that reduces glare from reflective surfaces and easily washes off after use. 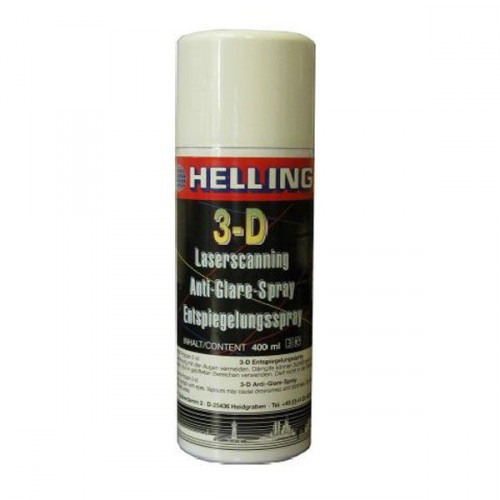 There are also special sprays that evaporate completely within a few hours of application, leaving no residue behind.

Another important part of preparation is the placing of markers on the target surface. Markers are much needed when scanning cars because many parts of the bodywork, such as the hood and doors, are largely featureless. Some areas will appear absolutely identical to the scanner, which can lead to errors when the scans are stitched together.

The actual process of scanning is not particularly exciting. The operator slowly moves the scanner over the car, keeping it at a distance of about 50cm from the surface of the body. The scanner transmits its measurements to the laptop, where they are processed and stored. 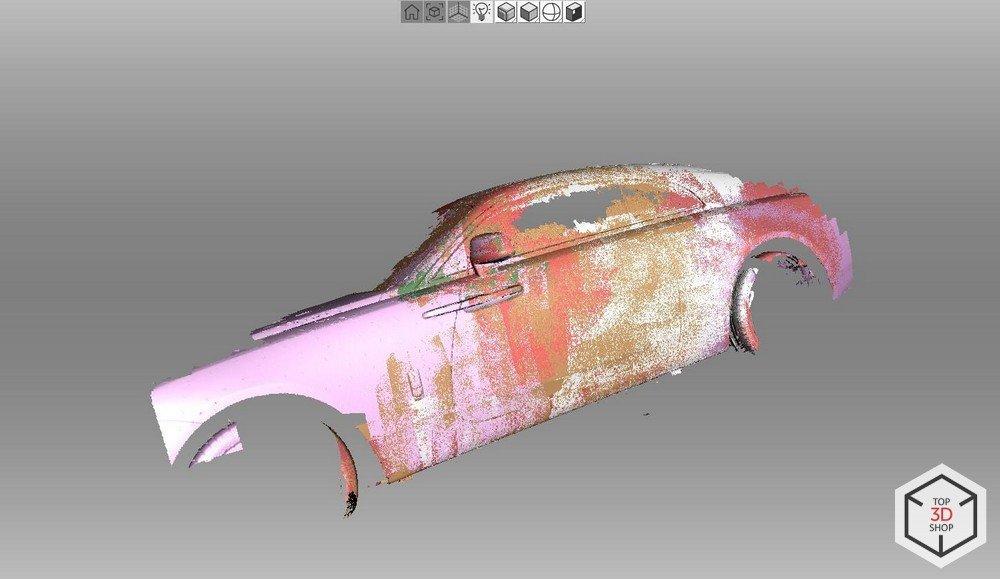 Scans viewed in the scanner software.

Cars in general are fairly large objects in the context of 3D scanning, and the Rolls-Royce Wraith is pretty large in the context of cars. The scanner is producing an enormous volume of data at such a rate that even a top-end laptop can struggle to process it, and some of the scans have to be dumped out of RAM and onto disk. That’s why cars are usually scanned in sections and later stitched together.

Once the whole scan is complete, the matting spray and markers can be washed off the car and the scan project is saved for further processing.

For the most part, individual scans get stitched together automatically. Occasionally some manual tweaking may be needed in places where the software didn’t get it right. 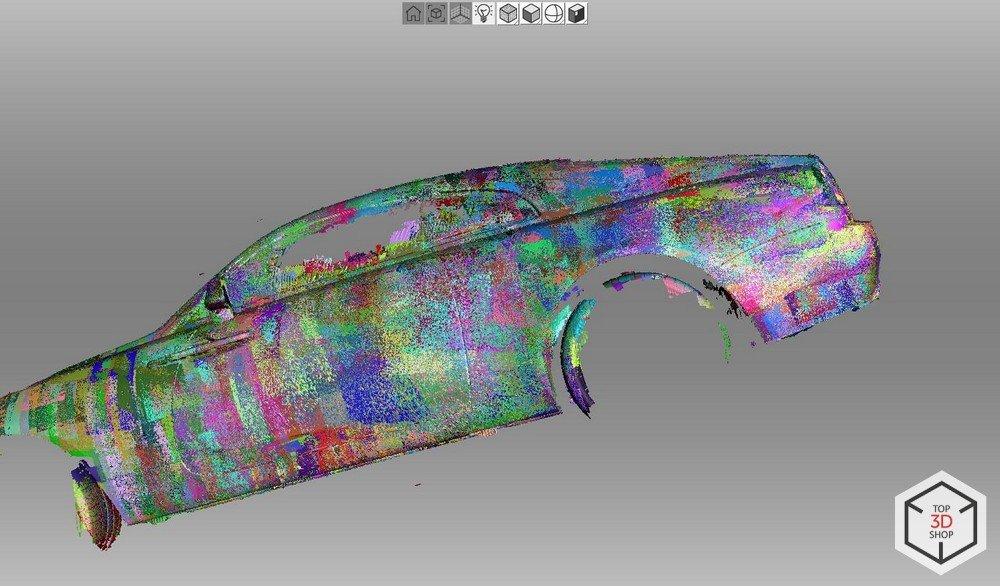 The model is compiled from a multitude of separate scans.

As already mentioned, we first assemble separate parts of the car body. In this case we were immediately able to put the front and rear halves together. Next those separate parts are joined together. While we’re at it we take out all unwanted noise such as bits of the workshop floor, as well as unnecessary details like the wheels and windows.

With the two halves joined together, we now have a polygonal model of one side of the car and our work in Artec Studio is done.

However, the model is still not ready for use. It’s still only one side of the car, and it’s polygonal whereas we need to deliver a parametric model.

The first issue is easily addressed in pretty much any 3D modeling software. We can simply mirror the model around its axis of symmetry and then adjust alignment of the two sides. When the mirrored fenders line up perfectly with one another, we know the two halves are correctly assembled.

For greater accuracy I did this part by creating a separate mirrored copy of the model and running both half-models through Artec Studio’s geometric scan alignment tool, which also works with models.

Next we need to stitch the two halves together. This can be done in Artec Studio or in a 3D modeling tool. I did it in Geomagic Studio, since I would be doing the next operation there anyway. 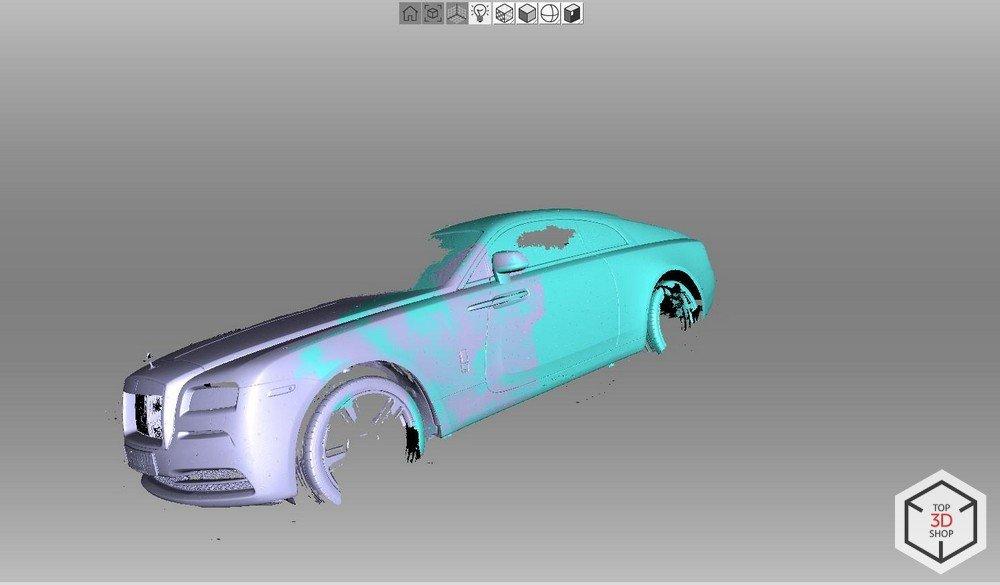 Porting to CAD is a long and complex process that involves using the 3D scan as a template to build a parametric surface. Fortunately, a simpler option is available in our case.

Geomagic Studio and Geomagic Design have an interesting method for converting polygonal surfaces into parametric ones that employs a complex algorithm using non-uniform rational B-splines. In simpler terms, it describes the model as a set of parametric curves with surfaces covering the spaces between them.

This method doesn’t work in all situations, for example it can’t process complex shapes like the thread on a bolt or small raised details. But for car bodies it works a charm.

It’s worth noting that models produced by this method aren’t particularly suitable for CNC milling. Their surfaces consist of a large number of separate parametrically-defined areas that take a long time for a g-code compiler to process. Nonetheless, it will eventually process them, whereas a polygonal model consisting of millions of separate faces would send it off into an endless loop. 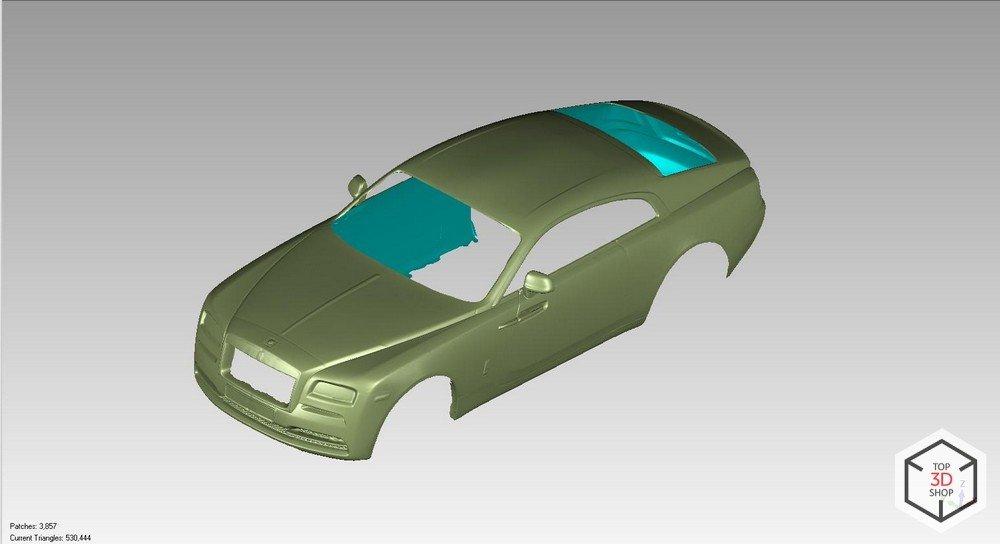 The completed model ready for use.

In the end a satisfied customer received a 3D digital model of a Wraith body, ready for use in parametric modeling as a template to fit various custom parts to. 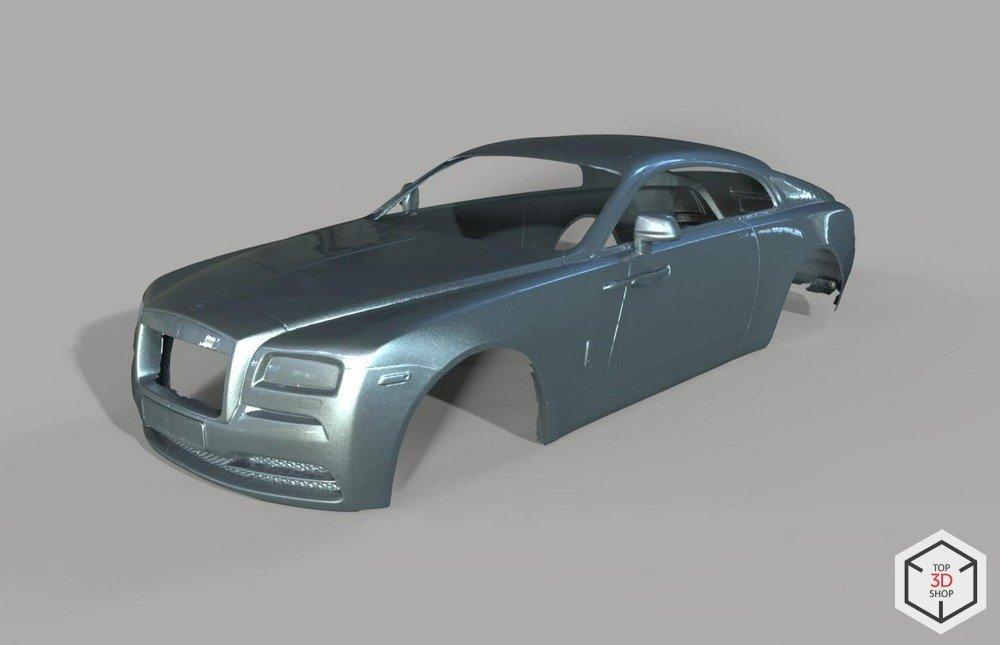 Top 3D Shop provides professional 3D-scanning of vehicles and other objects. For more information, send us an email.

Pimp My Ride: How We 3D Scanned a Rolls-Royce Wraith