Hi everyone! This is Top 3D Shop, and in this article, we will talk about creating models of airports using 3D technologies. Learn more about how modern manufacturing methods help develop and improve unique solutions for the most complex architectural complexes.

Despite the pandemic and the associated travel restrictions, there is still a huge global potential to expand the existing air communication network and create new airports.

Before boarding the plane, passengers spend most of their time in the territory and buildings of air terminals. So, these places should be convenient for quickly completing all the necessary procedures and waiting if necessary.

In recent years, great attention has been paid all over the world to the construction of new airports, which have turned from nondescript terminals into real works of architectural art. Now the projects of world-class international airports should not only look presentable, being basically the gateway to a country, but also meet the most modern requirements for passenger, transport, and logistics services.

Any airport is a complex environment consisting of interconnected systems for the movement of people, baggage, cargo, ground, and air traffic. Modeling and simulation of processes are used to analyze various configurations of airport buildings, improve the level of passenger service and baggage handling, develop all internal technological systems. The timely creation of the mockup of a future airport helps in this.

Since the advent of commercial air travel, the industry has undergone significant changes. The impacts of regulation, the emergence of affordable airlines, and the effects of global economic, environmental, and epidemiological factors have influenced the whole aviation industry.

Competition has made air travel available to a significant part of the world's population. As the cost of air trips was declining, their popularity increased. The projected growth in passenger traffic over the next two decades created a need for the development of new approaches to the design and enlargement of airports to handle annual passenger and cargo loads.

The size of airport buildings cannot grow indefinitely. In many regions, operators faced a lack of land for expansion. Even in locations where land is physically accessible, the costs associated with the creation and maintenance of much larger terminal buildings are not always reasonable.

To meet projected passenger loads, the industry needs to adopt new design principles for terminal buildings that maximize their efficiency. In addition to rising cost pressures, there are three other sources of change in the aviation industry that may significantly affect airport architecture: industry standards, related technologies, and public opinion.

Modern methods of 3D modeling and prototyping allow operators and investors to thoroughly evaluate both existing facilities and those being newly designed.

The advantages of using additive and subtractive digital technologies in prototyping include a decrease in the cost, ease of making changes at any stage, a reduction in the labor volume of expensive specialists, and production acceleration.

For more information on the use of digital technologies in creating models, as well as about working with our company on such tasks, timing, ordering, equipment, and materials, read the corresponding article.

Model of a Boeing 747 hangar 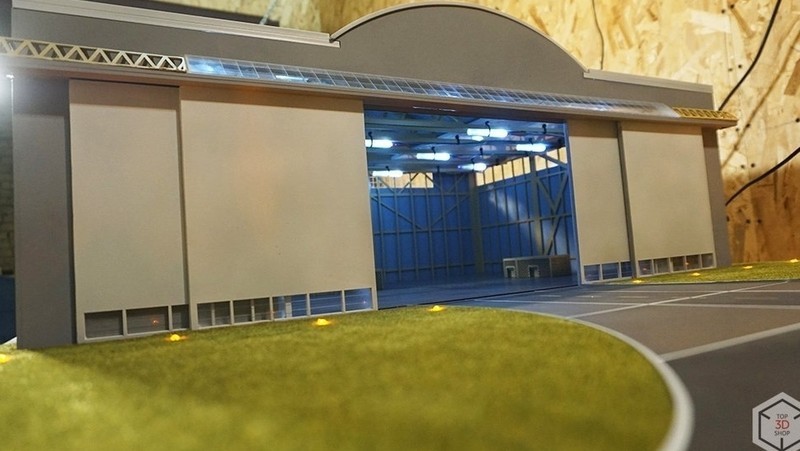 One of the interesting cases of Top 3D Shop was the manufacture of a model of an aircraft hangar from scratch, without any real prototype or technical documentation. To create this, it was necessary to design it in the first place. 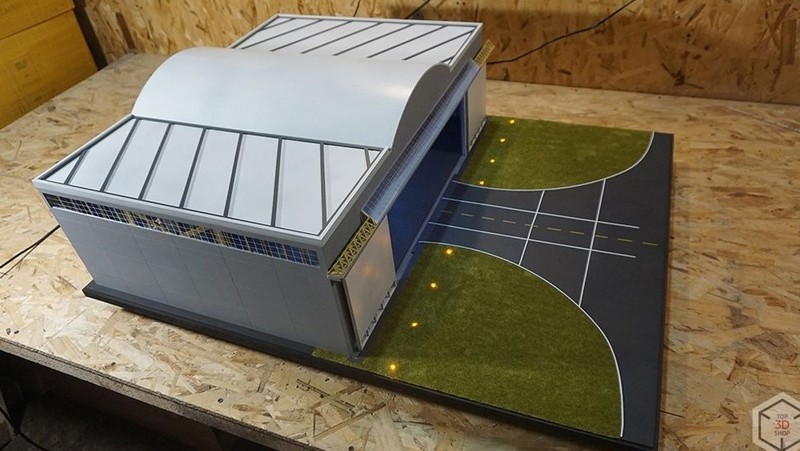 A hangar is typically a prefabricated frame structure without design elements, but our model looks more interesting. It is due to numerous parts and design features, such as a flat roof with a central arched insert, geometric patterns, panel seams, engraved window sashes and embossed taxiway curbs, metal structures, and small technical buildings.

The hangar floor of liquid rubber imitates a real polymer coating. The main building unit of the structure is a plate with slots for glazing. LED lights were installed in the model, their location replicates the lighting schemes of real hangars. The model assumes that the aircraft model can be placed in a hangar, a gate, or outside. 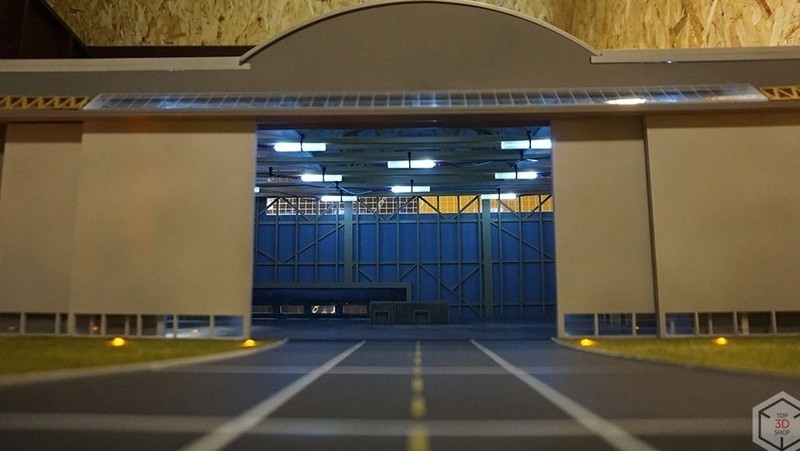 In total, the work on the model took a month and a half.

The mockup was created using 3D printing, laser cutting, CNC milling, as well as painting, gluing, and some electrotechnical work.

Model of the Benito Juárez International Airport in Mexico City 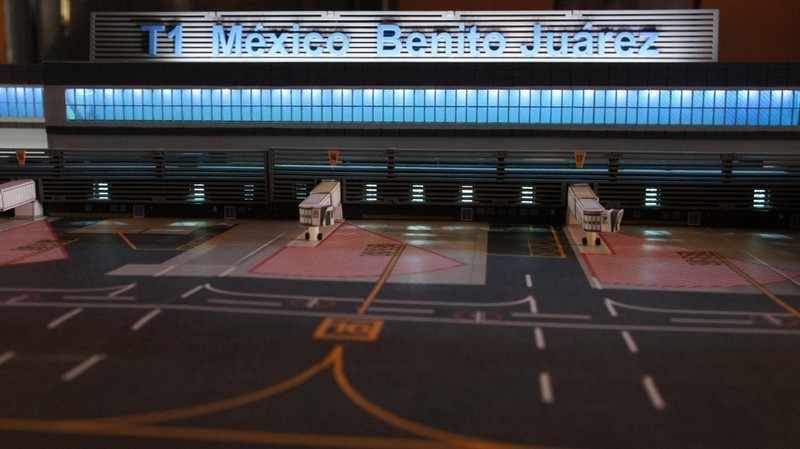 Daniel Dominguez and Andres Glass created a 1:400 scale model of the Mexico City International Airport, with parking lots for 18 aircraft and LED lighting. 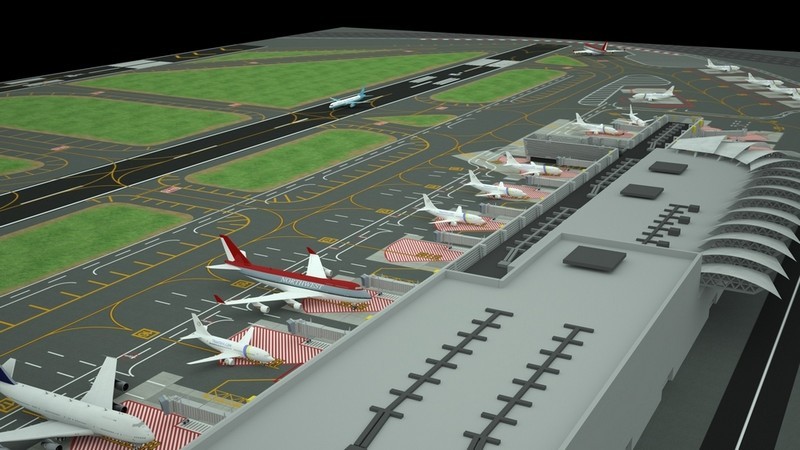 Real photographs and satellite images from Google Maps were used to create the model of the airport. This allowed for accurate replicas of taxiways, gates, and architectural structures. The digital 3D models were made in vector format using Adobe Illustrator, Google Earth, and 3D Studio Max, and then converted to formats used by cutting and printing devices. This made it possible to precisely convey the dimensions of gates in the required scale. 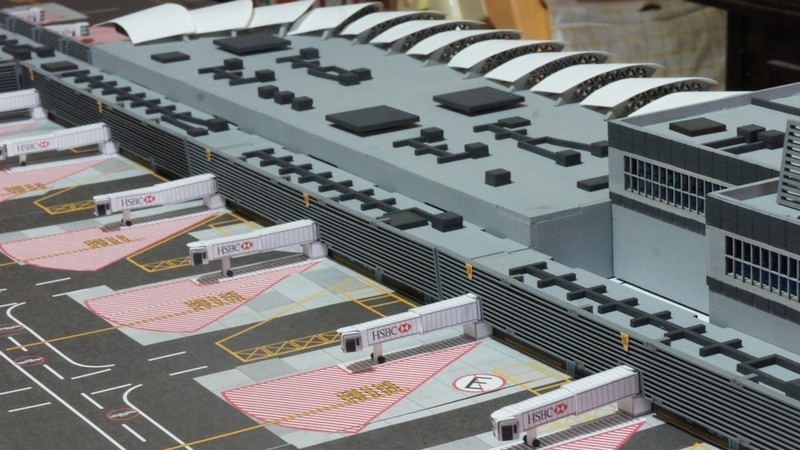 The area and location of buildings, runways, taxiways, parking lots, and so forth were calculated in accordance with satellite photographs. Lines and signs were drawn as shown in photos, and green areas and sidewalks were printed on photographic paper and cut with a plotter. The gates were also cut from cardboard and glued together. 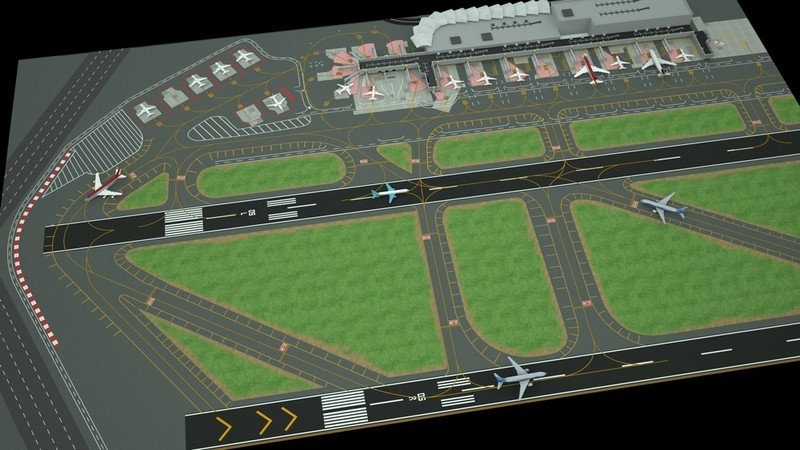 Foil was used to make the runways and taxiways, trees were 3D printed, and special LED strips were applied to create a night lighting effect. 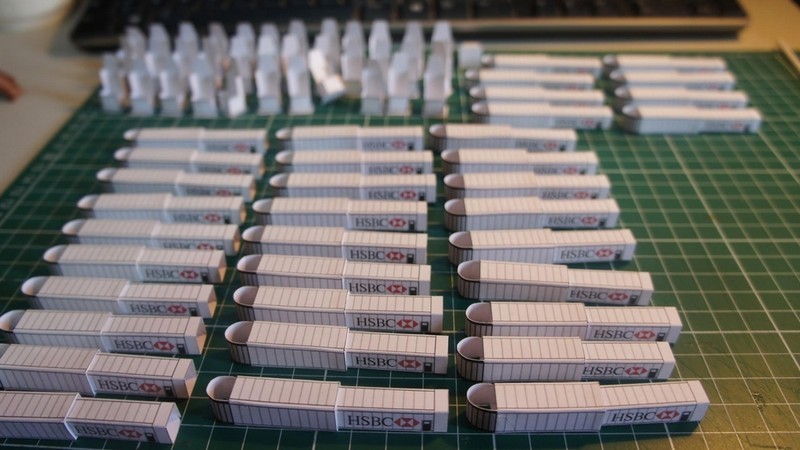 It is planned to add gates 19–32, seven cargo terminals with a customs zone, and a second airport terminal. 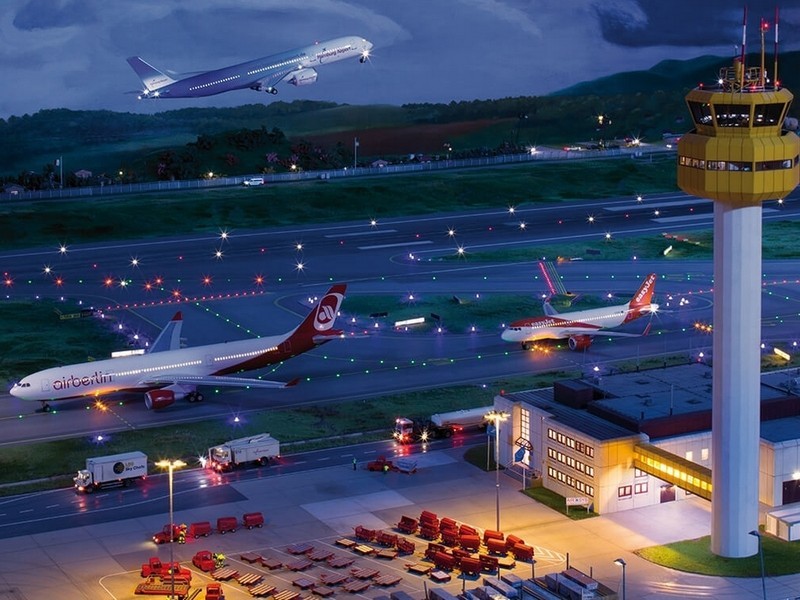 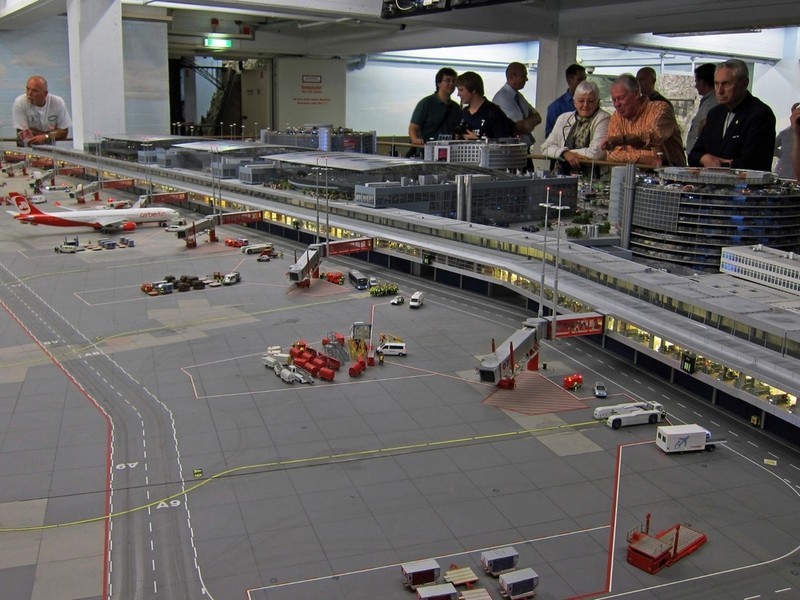 The project of the miniature museum in Hamburg by twin brothers Gerrit and Frederick Braun and Stephan Hertz started more than ten years ago. Its important part is the world's largest robotic model of the Hamburg International airport made at a scale of 1:87.

“Nearly everyone to whom we told about our idea said we are crazy dreamers,” reminisces Frederick Braun. 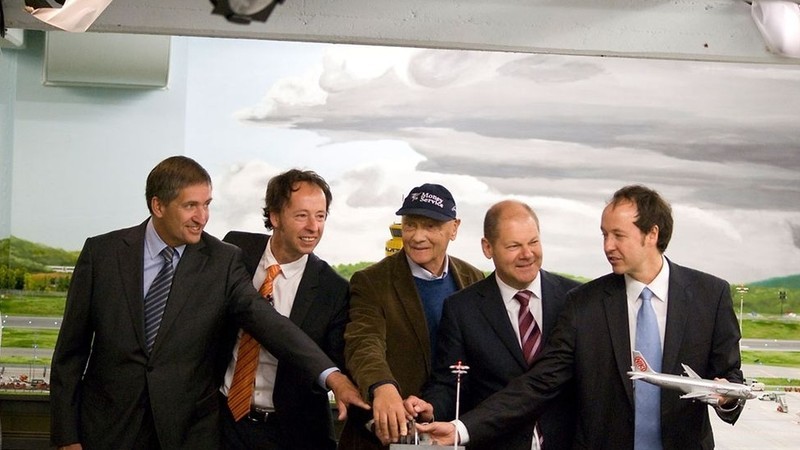 But that didn't stop the team, and they came up with a bold plan to make their dreams come true. The creation of the museum was partially funded by the municipality of Hamburg, the other part of the costs were covered by private investors and the creators themselves.

“We wanted to build a world that men, women, and children could dream of. We are inspired by the amazement of people,” explains Gerrit Braun.

“At the beginning, we used what could be found in the off-the-shelf market but quickly realized that the choice was quite limited. Therefore, most of the elements had to be done by ourselves. We wanted to achieve unique effects and admiring looks. I needed details for unusual objects, just like those in the real world. We made the first objects using conventional, artisanal methods,” says Michelle Kraken, constructor at Miniatur Wunderland. 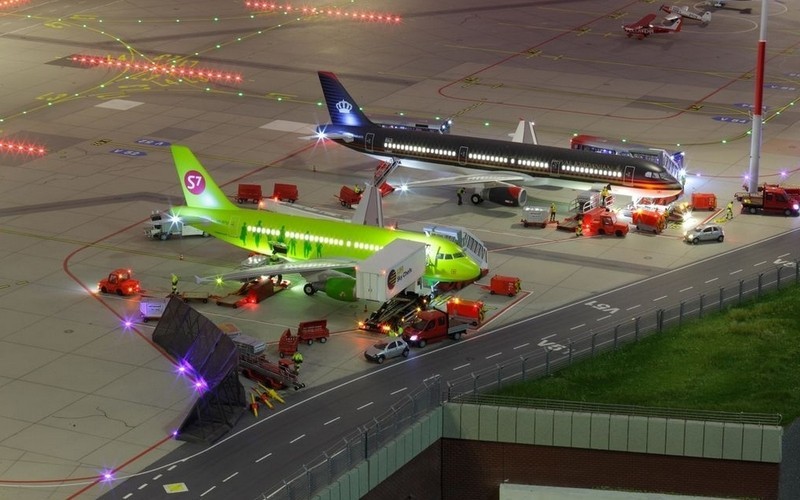 Facts and figures about the Knuffingen airport mockup: 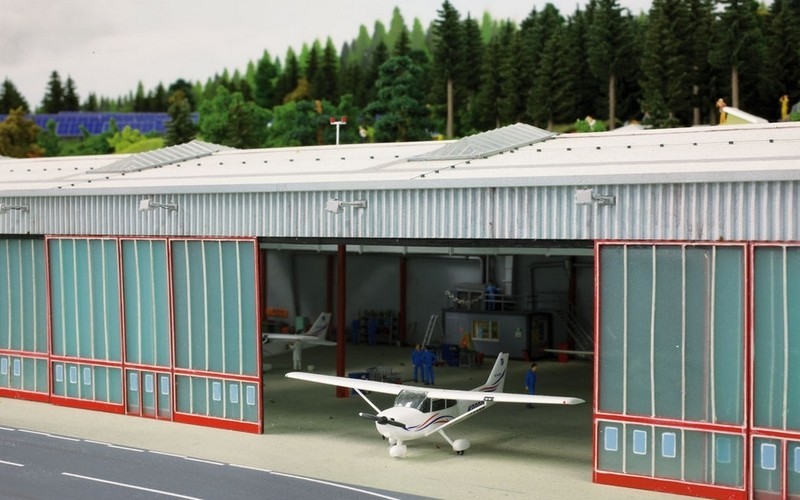 Like the real airport, the model deals with small aircraft. 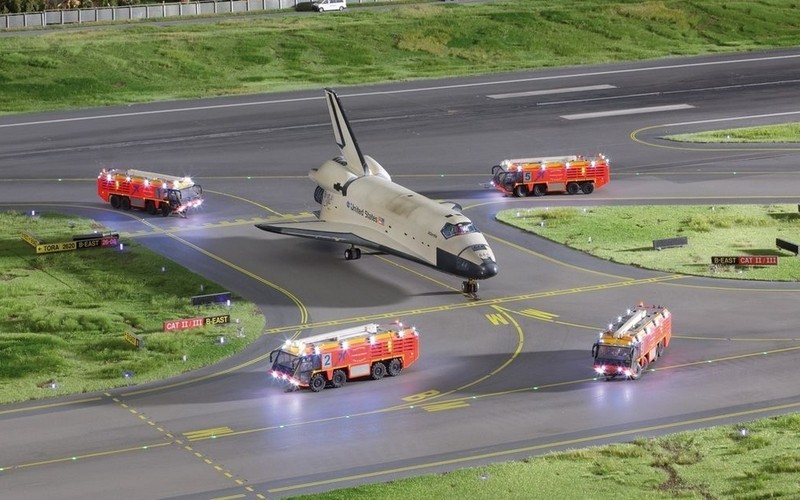 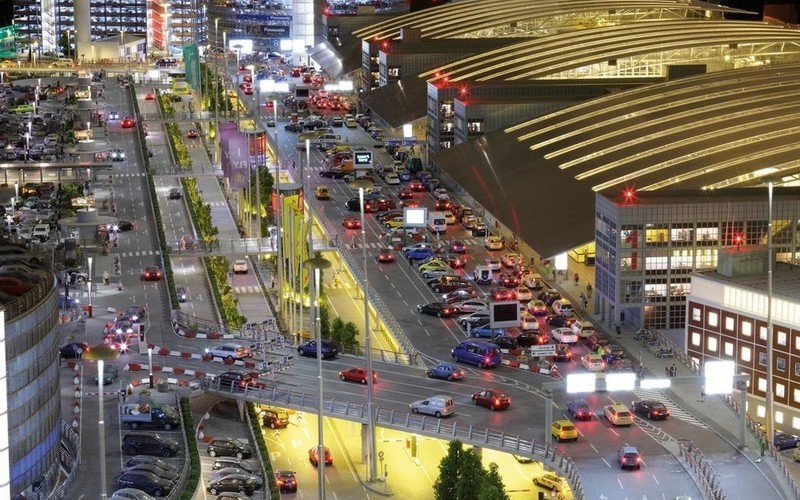 The model clearly shows the problems with transport accessibility in this airport. 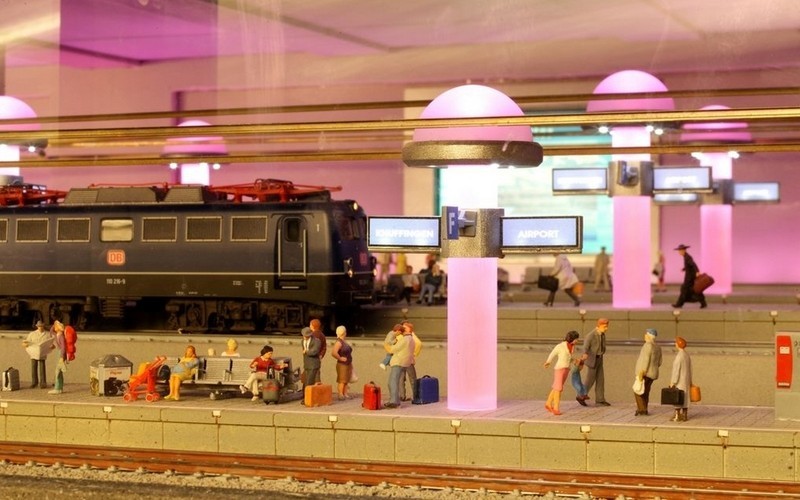 There is a railway line from the airport to the city. 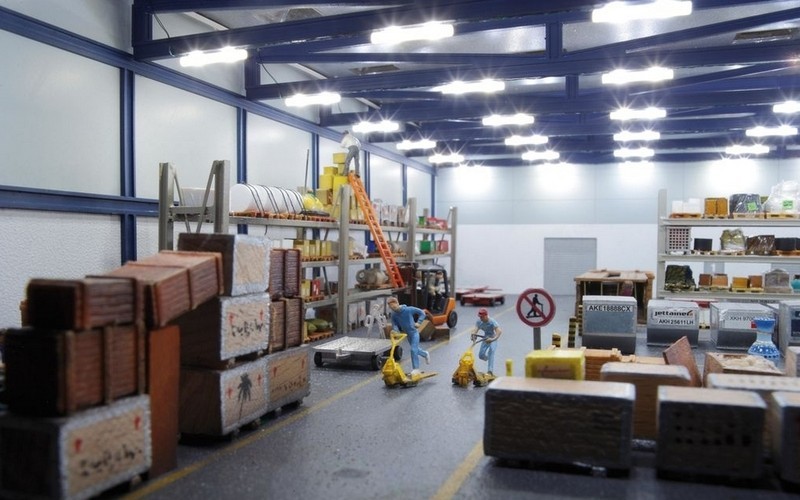 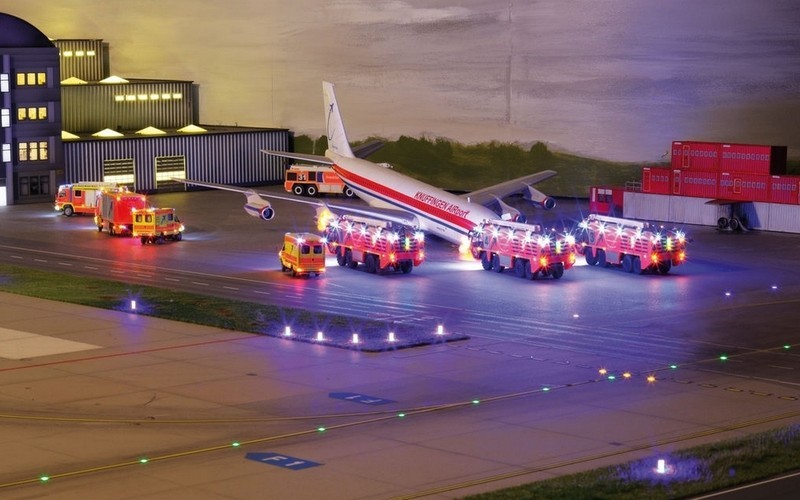 The model demonstrates the work of fire services in the event of an aircraft fire. 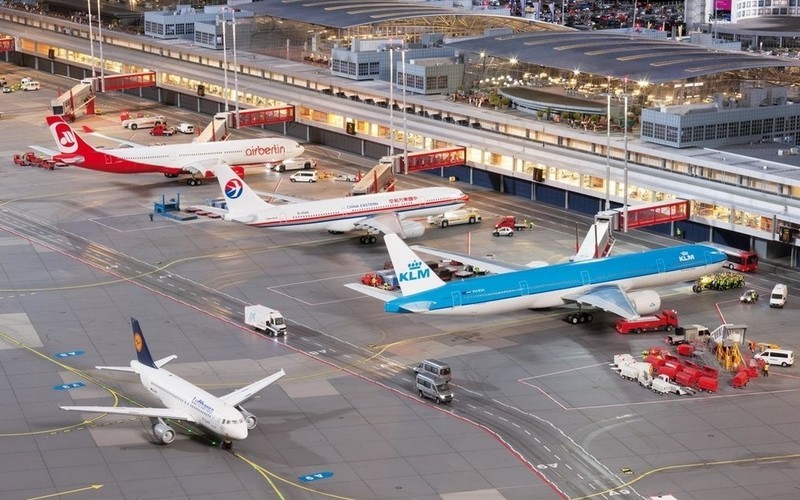 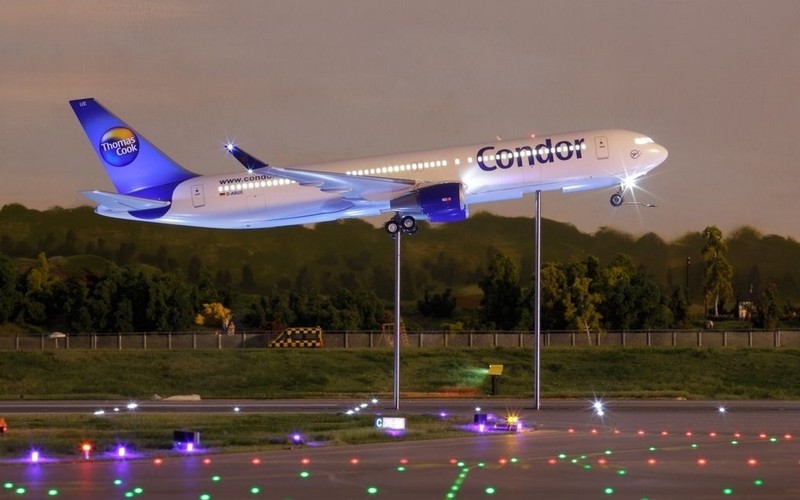 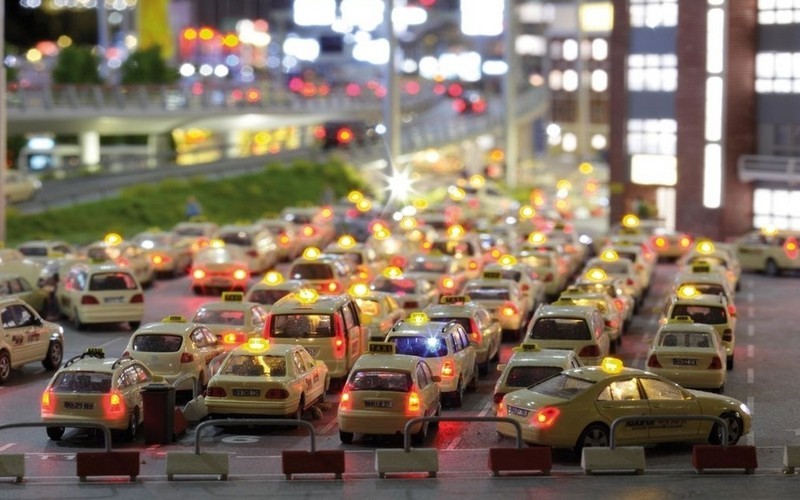 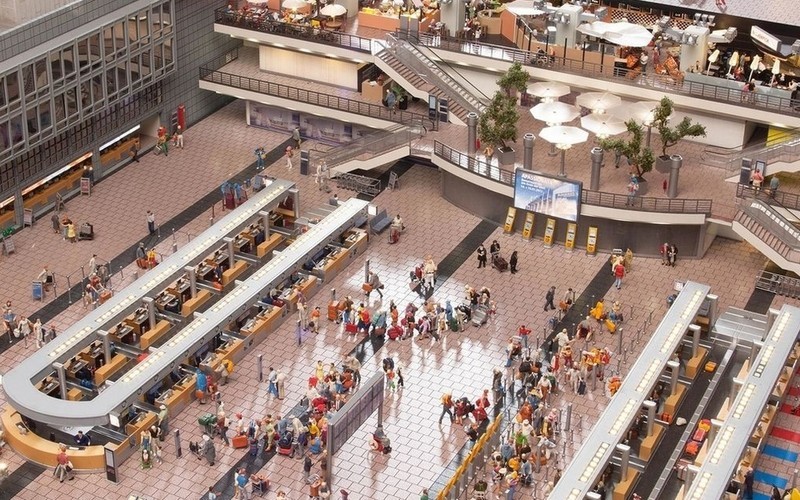 “Manual labor was taking a huge amount of time, so we decided to switch to additive manufacturing. All models are designed in Rhino CAD and printed with the Totem 3D UV DLP 3D printer from UV-sensitive resins. The build volume of 128 x 80 x 150 mm is sufficient for most tasks of Miniatur Wunderland." 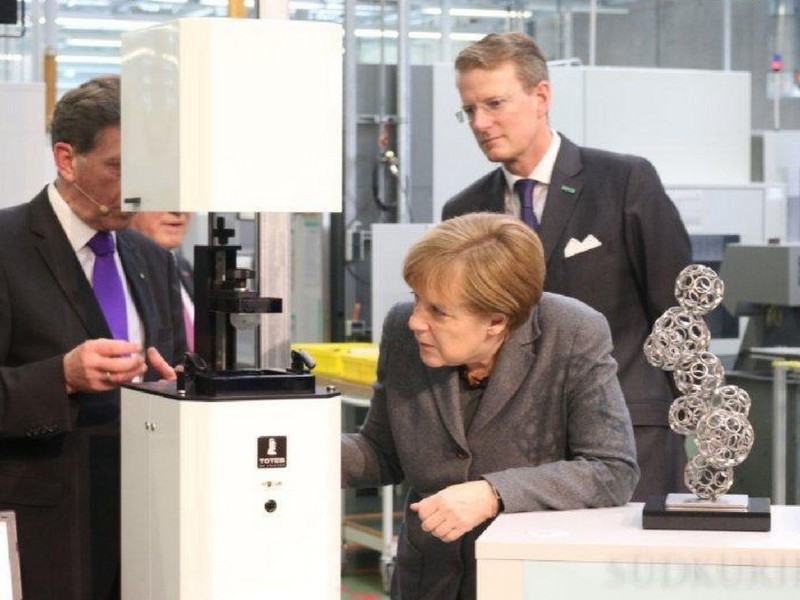 “For a better quality of models and a good level of detail, we use print speeds of up to 30 mm/h, layer heights from 25 to 100 microns, and X/Y resolution of 100 microns. Now we can concentrate on designing something new and let the device do the printing at night. Now we spend much less time and money on creating models." 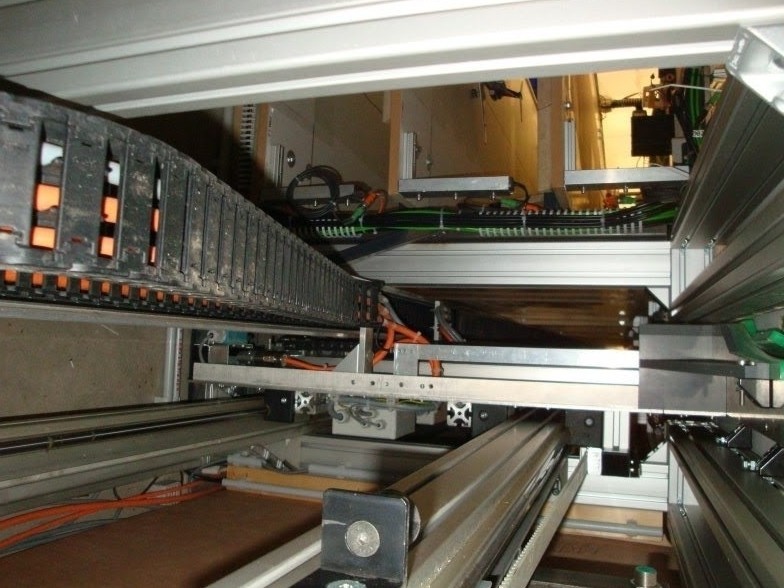 To move aircraft models across the take-off field, special aluminum troughs with noise-absorbing dampers and flexible cable ducts with a small pitch of links were used to reduce the radius of twisting of electrical wires. 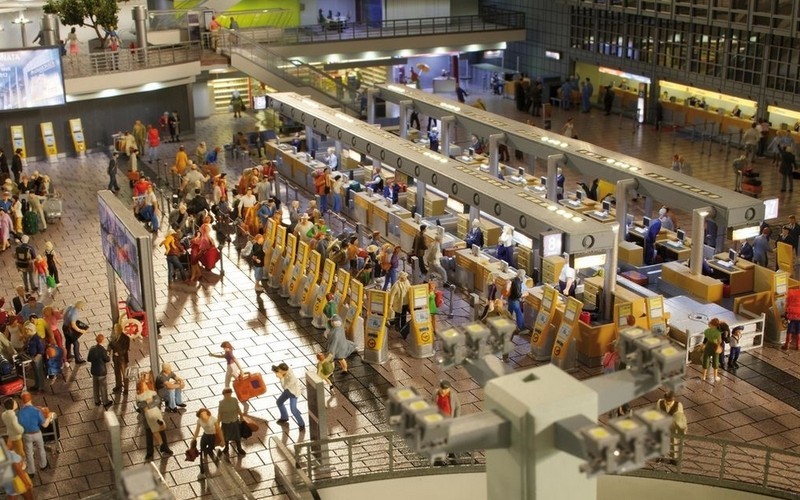 The departure board of the Knuffingen model is synchronized with the control system of the real airport, providing real information about arrivals and departures. 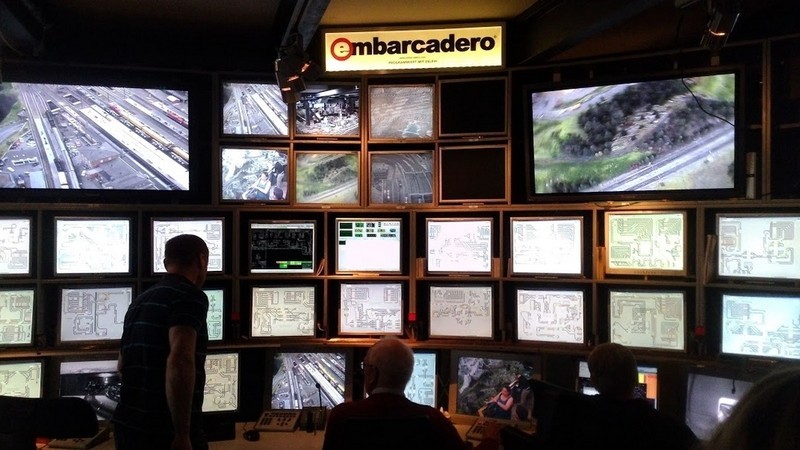 The heart of the entire Miniatur Wunderland museum is the hardware and software control center for all its exhibitions. It runs using a proprietary software complex developed in Delphi. From a technical point of view, in addition to the need for constant work of 3D models, its main task is to synchronize various components and subsystems of the museum. 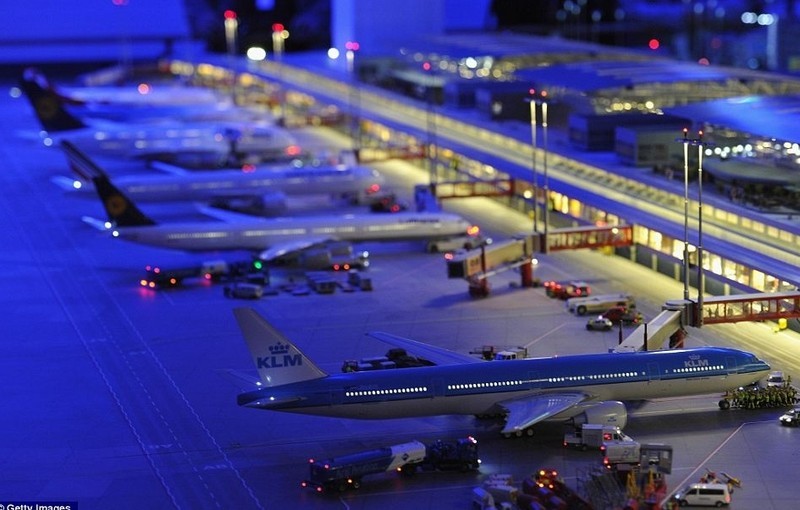 Trains, cars, airplanes, and over 385,000 lights must work in sync. For example, every 15 minutes, all miniature worlds go through a full day-night cycle. It is necessary to synchronize the movement of cars with traffic lights, turn on street lamps at night, illuminate houses, and control the lighting of the surrounding space. From the start, the Miniatur Wunderland's extensive software infrastructure was developed in Delphi. Now it spans nearly three quarters of a million code lines. 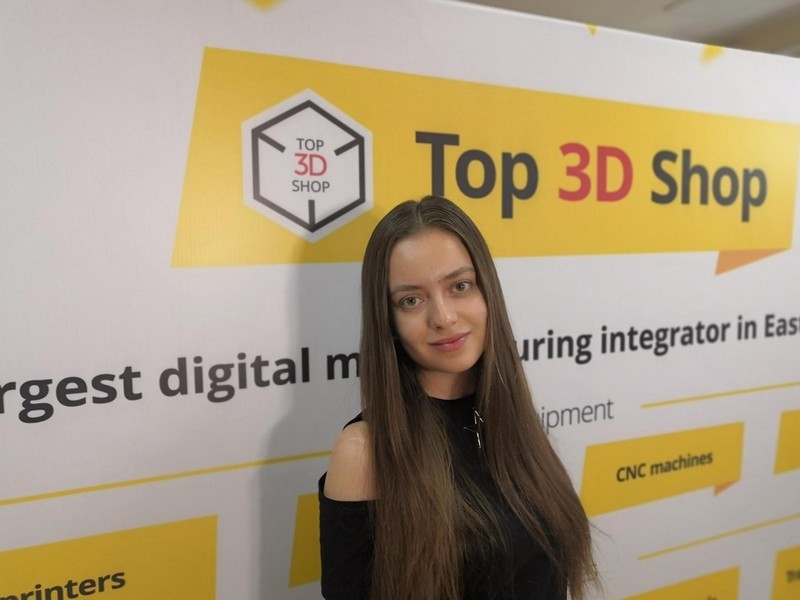 Airports are one of the most complex engineering structures. When 3D prototyping airports, it is important to perfectly maintain all the proportions of an existing or projected object, correctly position the lighting elements, and reproduce the smallest details. Airports are huge, so the scaling of models is substantial. Resin 3D printing is great for creating the finest detail, which is crucial at such scales. Although it is impossible to do without handicraft in such complex projects, the use of additive technologies in the production of airport 3D models can significantly reduce the cost and speed up the production.

It is best to employ CNC milling machines to create large fragments or elements of the landscape. Laser cutting and engraving machines are ideal for flat parts, letters, and stickers.

You can read more about how 3D mockups are made in the article "Printing of Complex Building Models".

Modern airports are a great example of using high technologies and advanced materials in the implementation of the boldest architectural concepts. Airports serve not only the purpose of ensuring safe flights — they are also objects of the cultural heritage of our era, harmoniously combining non-standard architectural solutions with the latest achievements in the field of construction, logistics, and high level of service.

Prototyping helps bring this unique combination to life, efficiently plan traffic and other flows, and present the project to investors and customers. In addition, a well-made model can serve as a tourist attraction in itself.