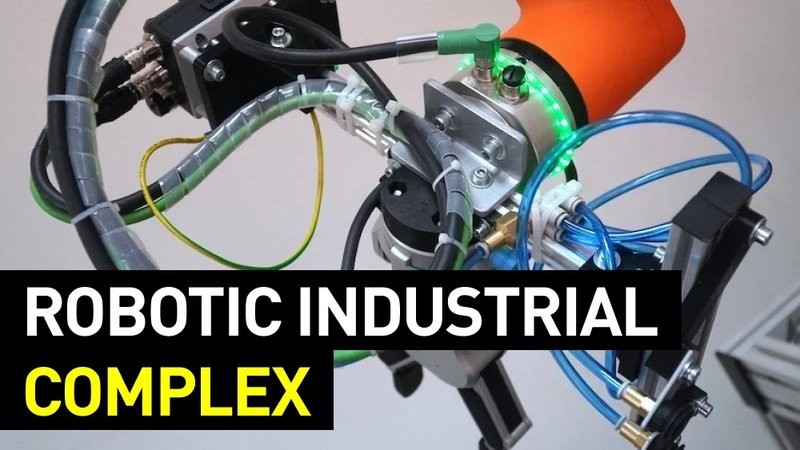 In late 2020 and early 2021, we integrated a comprehensive robotic solution for personnel training using the latest models of Fanuc, Hanwha, Omron, and Yaskawa industrial and collaborative robots. 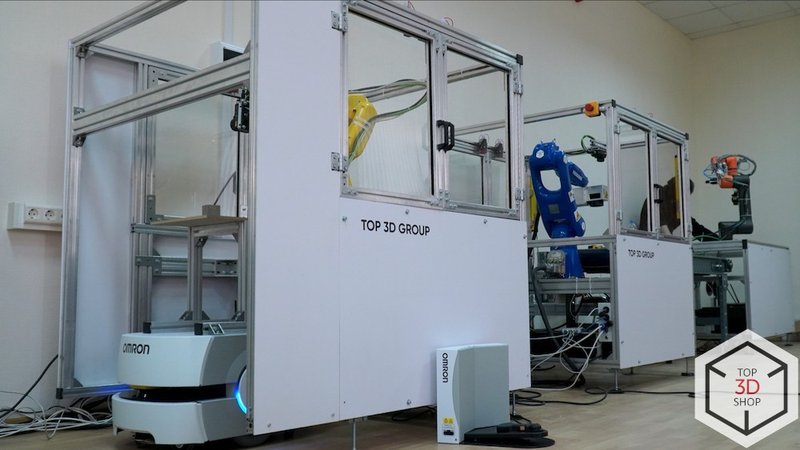 The project involved the creation of a full-scale model of modern digital production for an IT company. 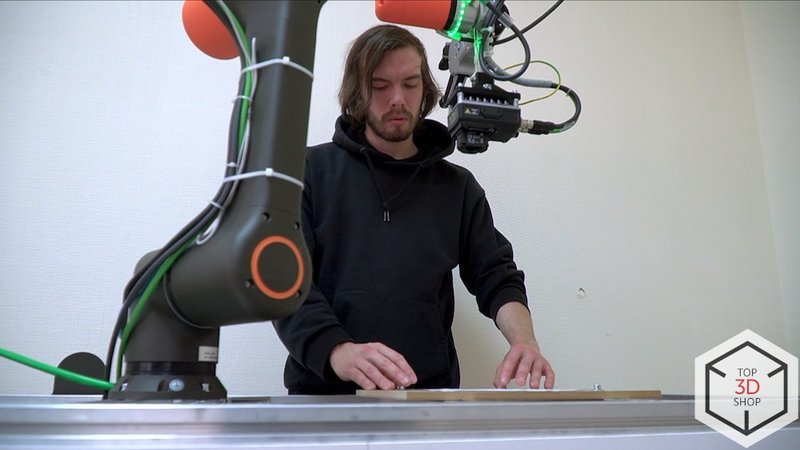 Top 3D Shop company has implemented a full integration of modern industrial, collaborative, and mobile robots as well as related equipment and software. The process included the supply of all necessary components for the designed complex, a full range of assembly works, installation and configuration of the corresponding software, commissioning, and staff training. 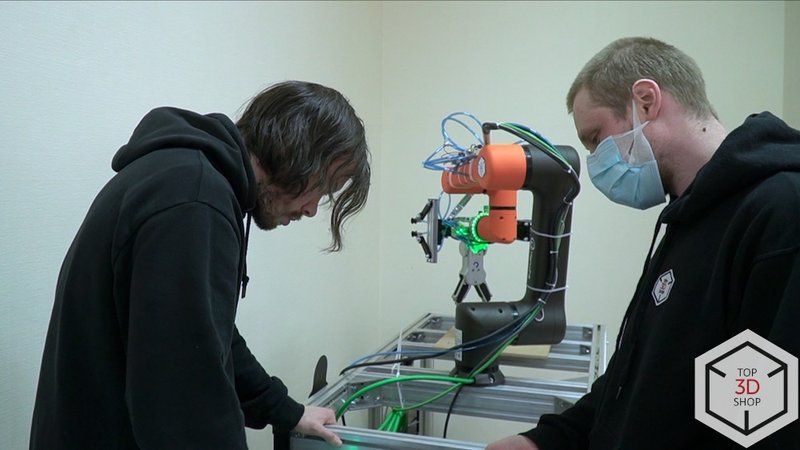 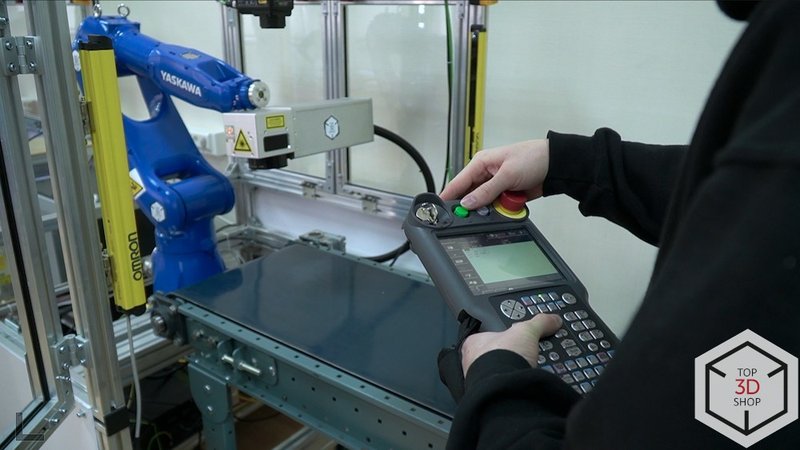 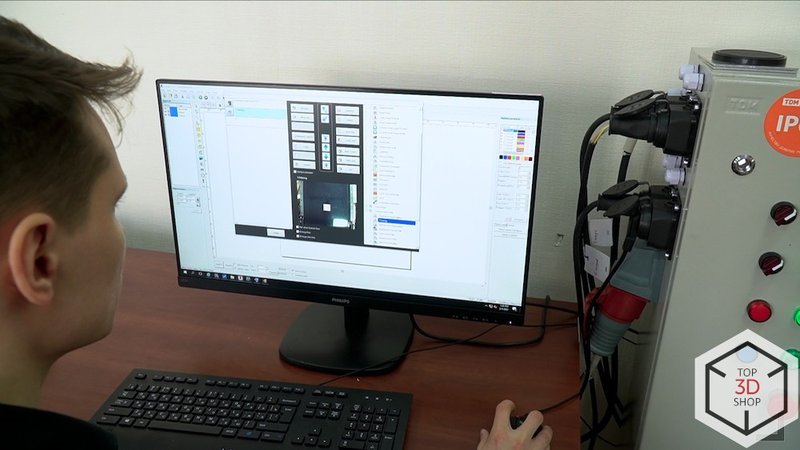 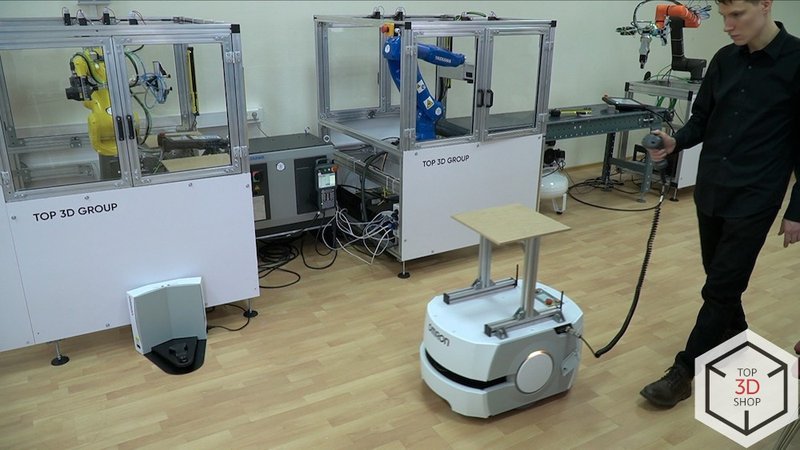 The customer plans to use the robotic industrial complex simulator to train personnel in how to maintain modern technologies, both in terms of hardware components and software. The project carried out by Top 3D Shop will allow the company to test virtually any idea related to production automation and its subsequent scaling to the required level. 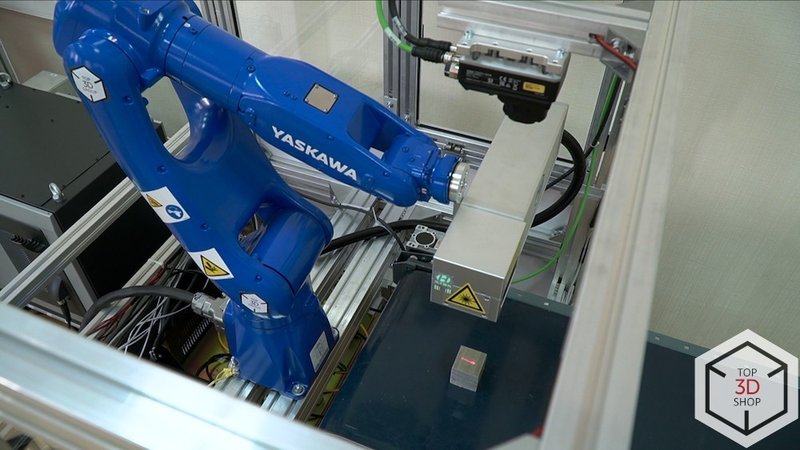 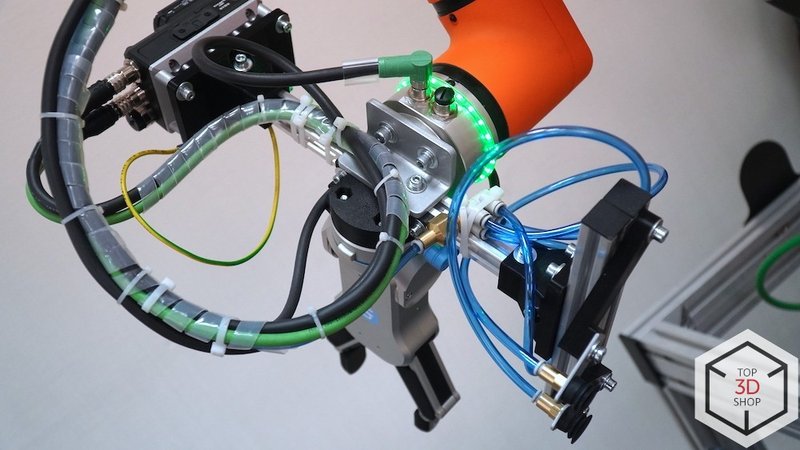 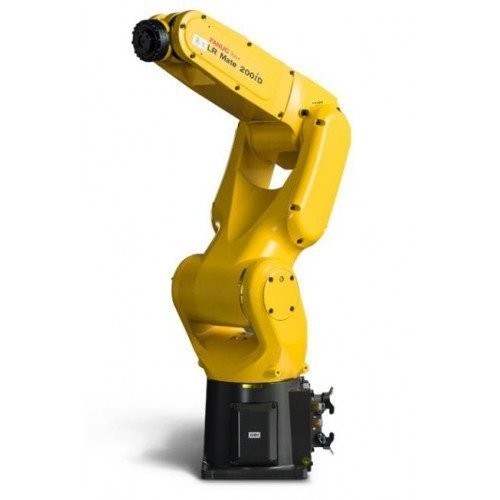 The Japanese company Fanuc is one of the largest manufacturers of industrial automation equipment. Its activities are concentrated in three major spheres: CNC and laser equipment, industrial robots, and machine tools.

The LR Mate series includes 6-axis robots the size of a human hand. They are suitable for any industry, including food production and metalworking. Moreover, they can be used in hostile and sterile environments.

The 200iD robot from the LR Mate series weighs only 25 kg, with a reach of 71.7 cm and a maximum payload of 7 kg. It is designed to work in confined spaces. The 200iD can serve as an assistant in assembly and maintenance of machine tools, sorting of various items, etc.

To perform the technological operations stipulated by the delivery task, the manipulator was equipped with the Omron vision system and two SMC grippers: vacuum and electric 2-finger gripper LEHF 32. 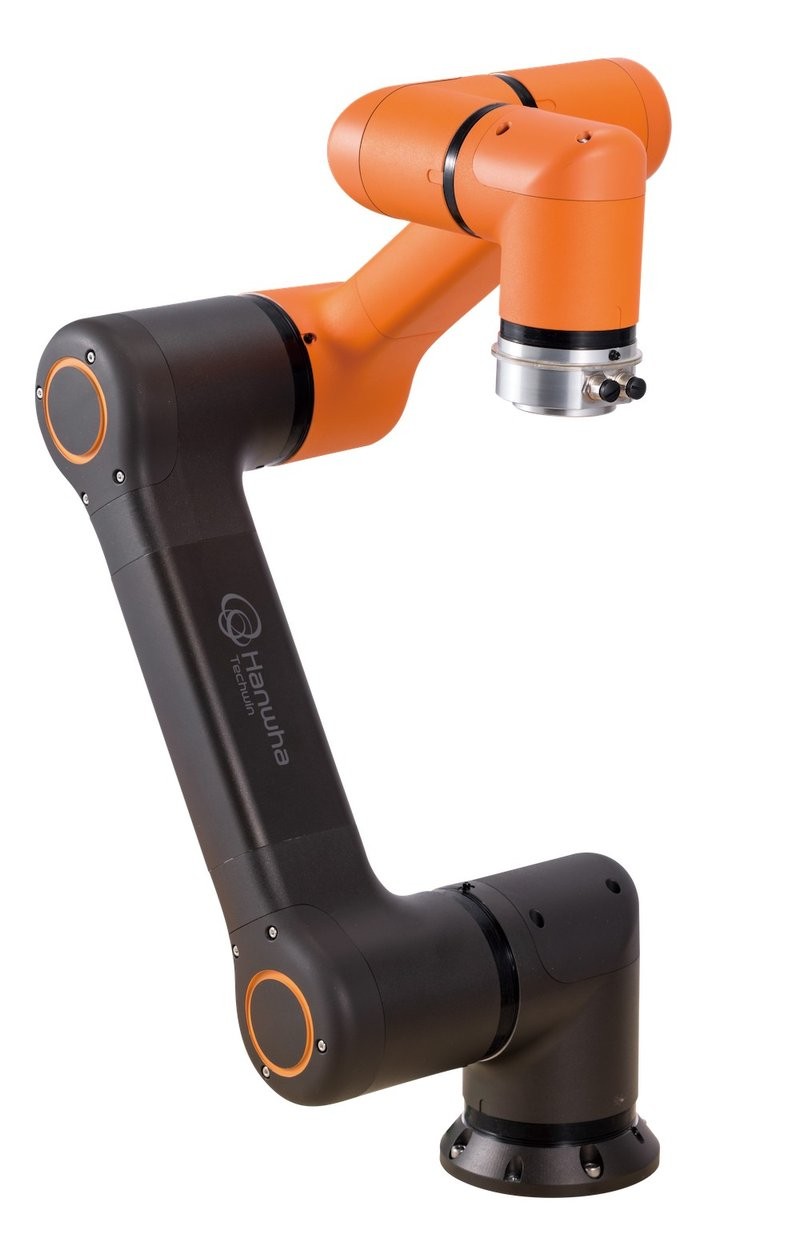 Hanwha Techwin is one of the most ambitious manufacturers in the collaborative robot segment. The company was part of Samsung Corporation, and in 2015 it was acquired by the South Korean industrial conglomerate Hanwha.

The reach of the HCR-5 model is 915 mm. Due to the optimal ratio of capabilities to cost, this cobot has become the most popular in the line. It is applicable to any task where collaborative robots can be used today. The HCR-5 is Class 2 certified for cleanroom applications, extending its use to the electronics industry.

The manipulator was equipped with the Omron vision system, OnRobot RG6 2-finger gripper, and SMC vacuum gripper to perform the tasks specified by the customer. 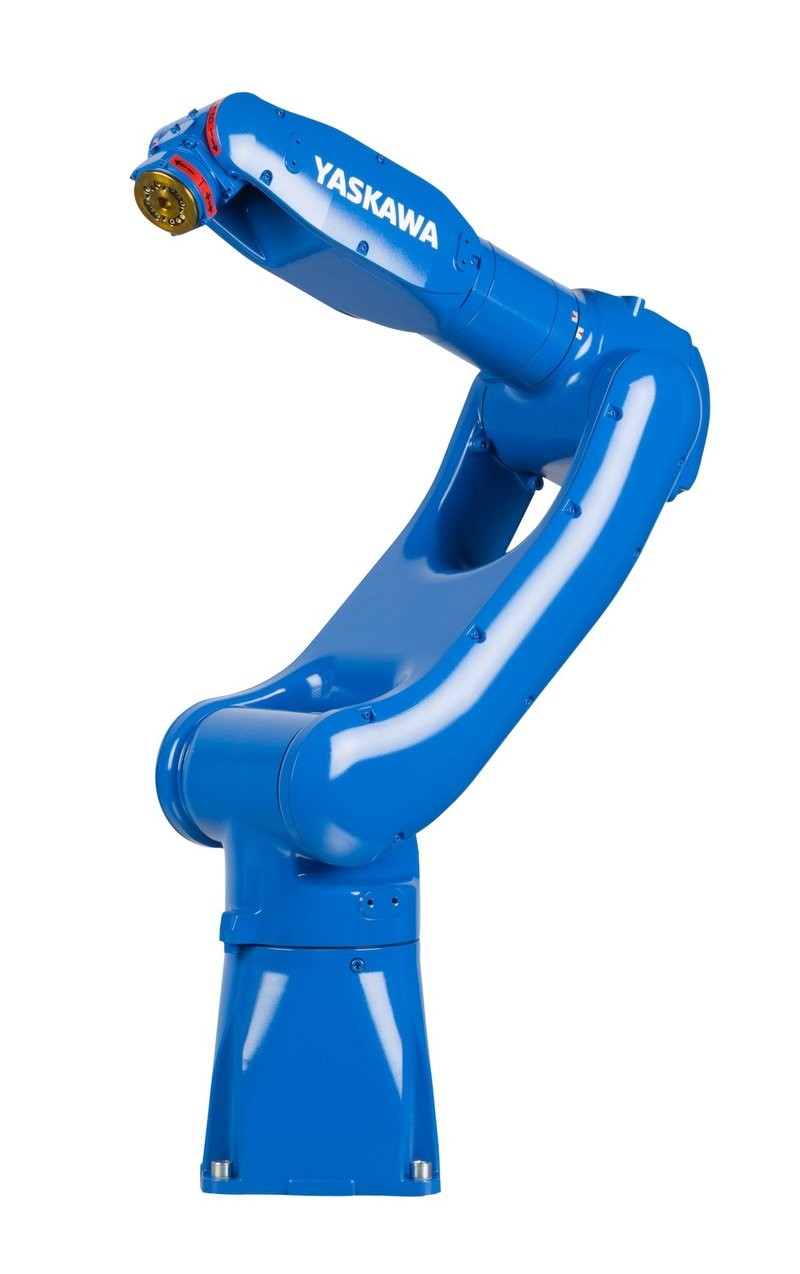 Yaskawa is a line of industrial robots from the Japanese company Yaskawa Electric Corporation. Today, more than 400 000 industrial and collaborative robots of the company are in operation all over the world.

The Yaskawa GP7 boasts high power, speed, and performance. It has a payload capacity of up to 7 kg. Like other robots from the series, it offers advanced acceleration and deceleration control. With its compact and user-friendly design, the GP7 can fit into small spaces. 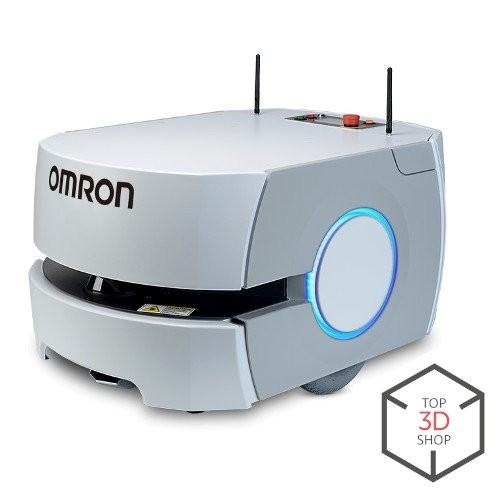 The Omron LD-60 is a fully autonomous, industry-leading device.

With its sensor system and built-in software suite, the mobile robot determines the best route between several predefined points by itself. A lidar and laser system allows the LD-60 to navigate freely in space, avoiding collisions.

The onboard PC independently maps the production site using the SLAM method. This distinguishes the LD-60 model from other automated guided vehicles that recognize obstacles but cannot avoid them. 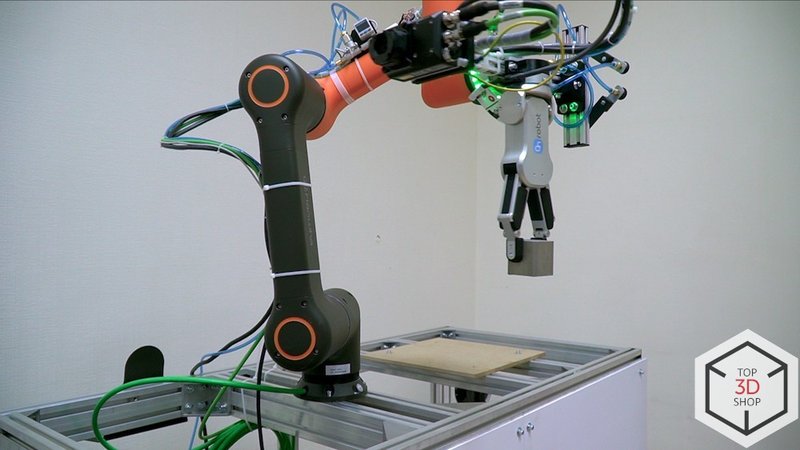 The configuration of the robotic complex supplied to the customer involves handling of metal workpieces by robots, laser engraving with subsequent quality control, and the final placement of the product on the basis of the quality assessment procedure: the machine must determine whether it is normal or defective.

Let’s look at the production cycle in more detail. In the first stage, the operator of the robotic complex initiates the procedure from the control panel. It displays all components of the complex and their current state.

The Hanwha HCR-5 collaborative robot equipped with the vision system selects a workpiece using the OnRobot RG6 2-finger or the SMC vacuum gripper, puts it onto the conveyor belt, and commands the CPU to move the workpiece to the laser engraving area. 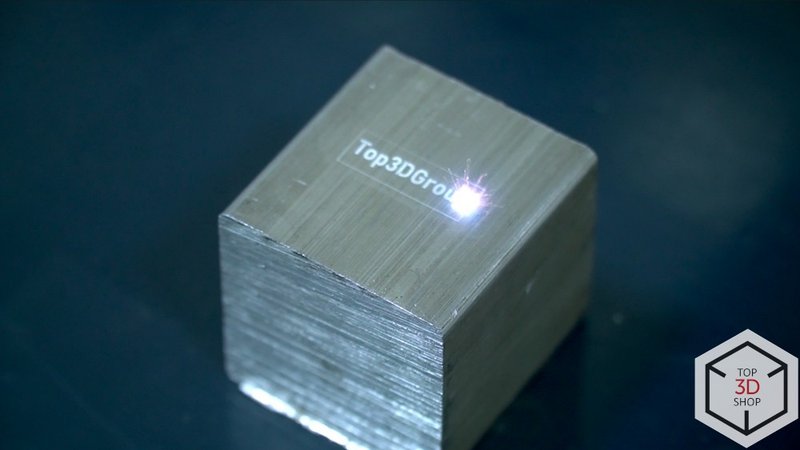 The Hanwha HCR-5 transfers the marked workpiece to the mobile platform, which is accompanied by the signal. Then, the Omron LD-60 moves the product to the robotic quality inspection cell. 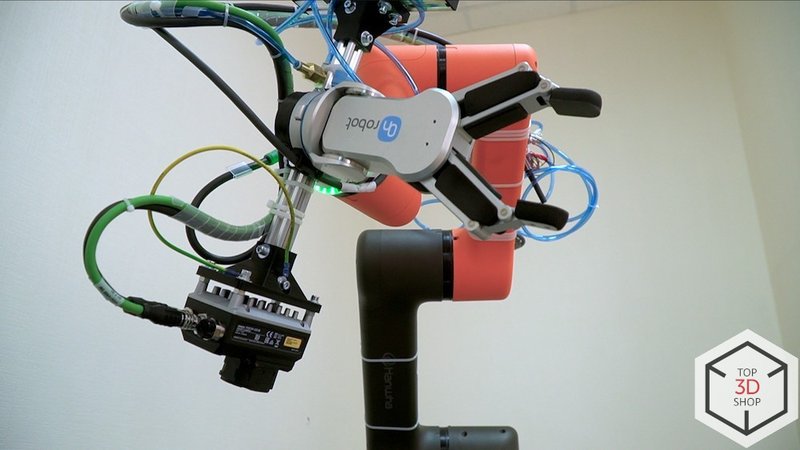 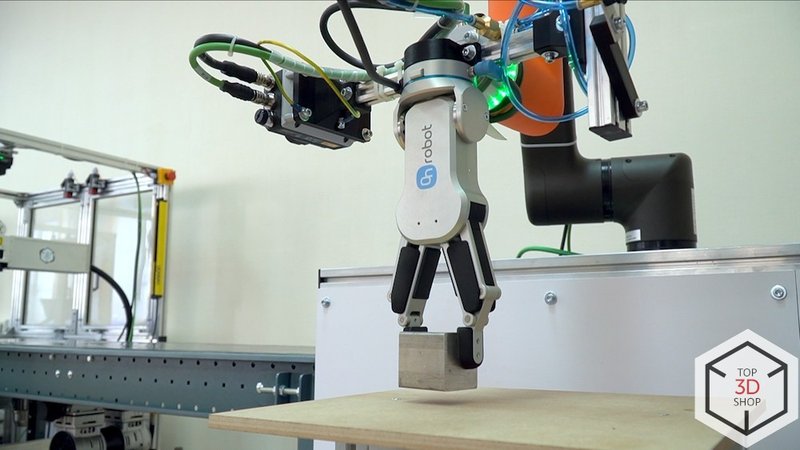 The Fanuc LR Mate 200iD determines the quality of the engraving by means of the mounted vision system. According to the type of the workpiece and the final quality evaluation, the manipulator activates one of the two SMC grippers, 2-finger or vacuum, and transfers the workpiece to one of the two zones — "normal" or "defective". 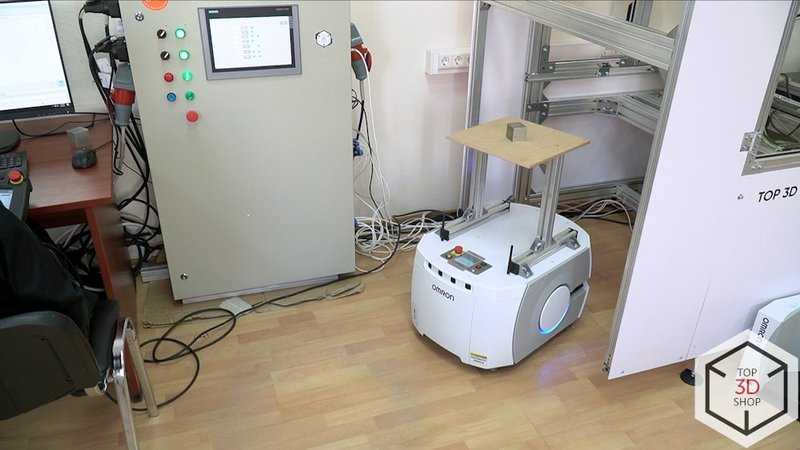 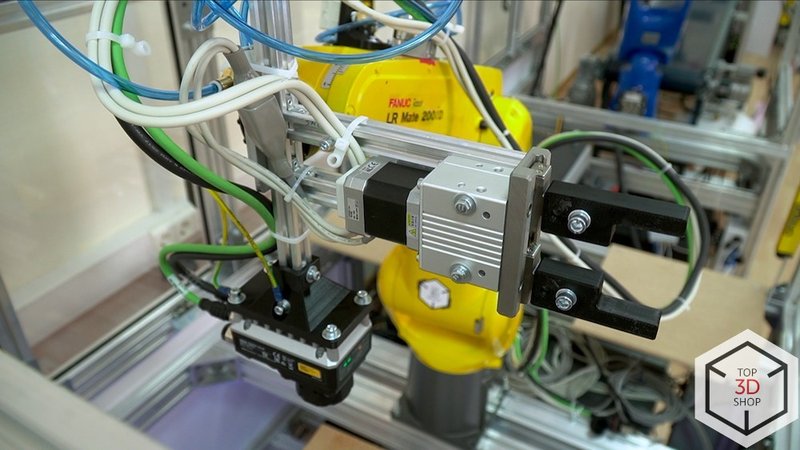 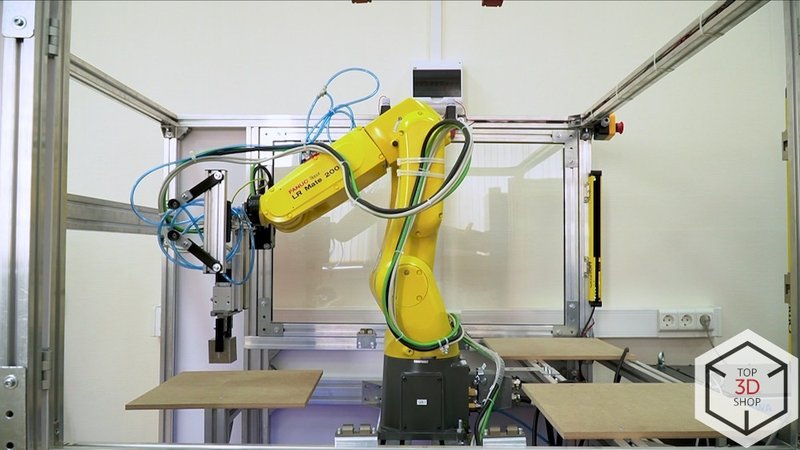 The production cycle is repeated either until the workpiece box is emptied or until the central control program is stopped by the operator. 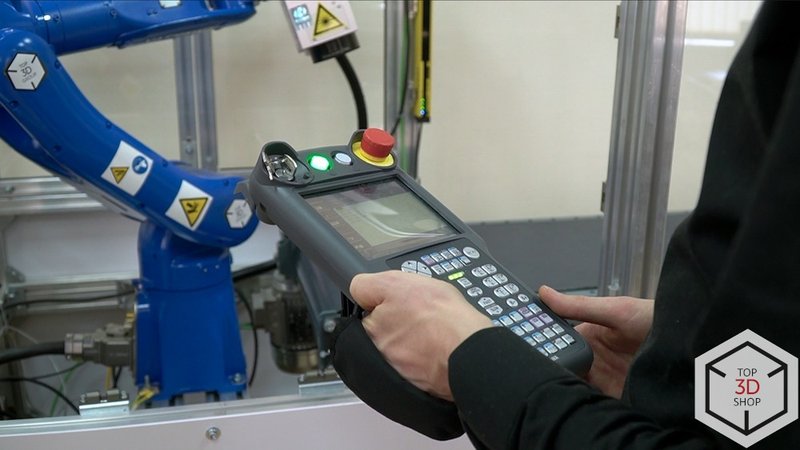 During the realization of this project, Top 3D Shop engineers successfully overcame a number of difficulties and issues related to synchronized operation of various equipment from several manufacturers.

Thus, they gained invaluable experience in integrating advanced robotic systems into a single system, in this case, into a robotic industrial complex controlled by a single program and boasting the capabilities of modern digital production. 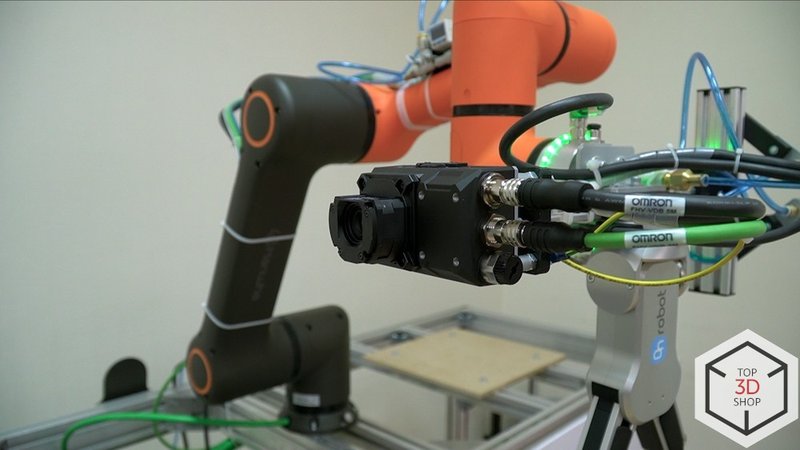 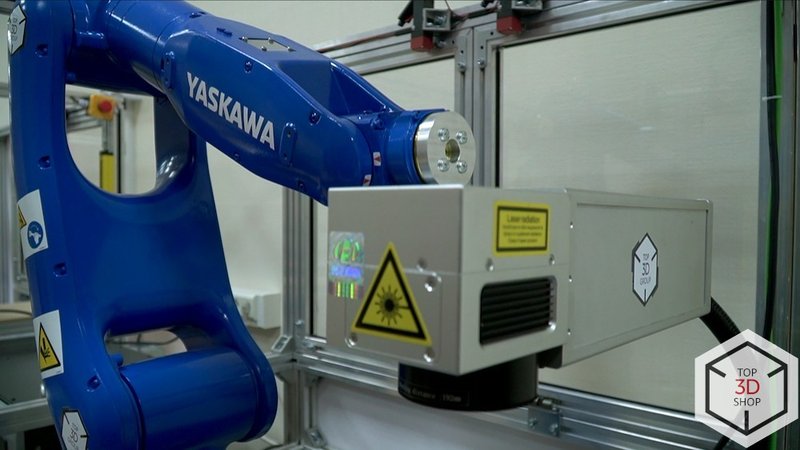 According to Top 3D Shop engineers, even the most comprehensive and advanced solutions of well-known brands are not always easy to integrate with equipment from other companies. Here we see how the specialists of Top 3D Shop have successfully combined hardware and software, which made it possible to create a unified system. From manipulators and mobile robots, to laser markers and vision systems, the simulator operates smoothly and autonomously.

Quantorium: The Use of VR in Education