Hi, everyone! This is Top 3D Shop and in this review, we will tell you about the Wanhao Duplicator 5S — one of the largest and the most accurate 3D desktop printers in the world. Find out more from our article. 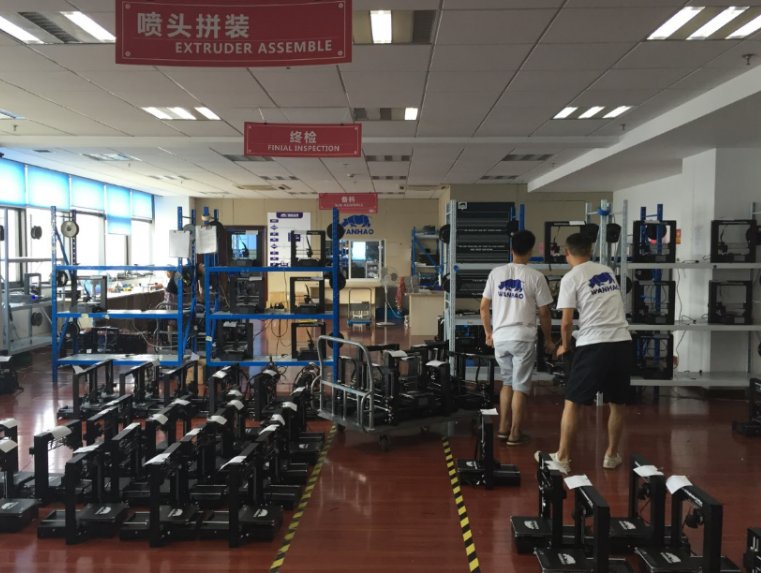 Wanhao, like most Chinese companies, started by replicating and upgrading 3D printer models available on the market at that time. In 2011, a few roommates in a college dormitory created their own 3D printer based on RepRap and Makerbot, which were popular at the time, and called it Duplicator One. Users liked D1 due to its low cost, simplicity of design, and a number of improvements on the originals. Today, Wanhao employs about 500 people, and its annual turnover exceeds $25 million. 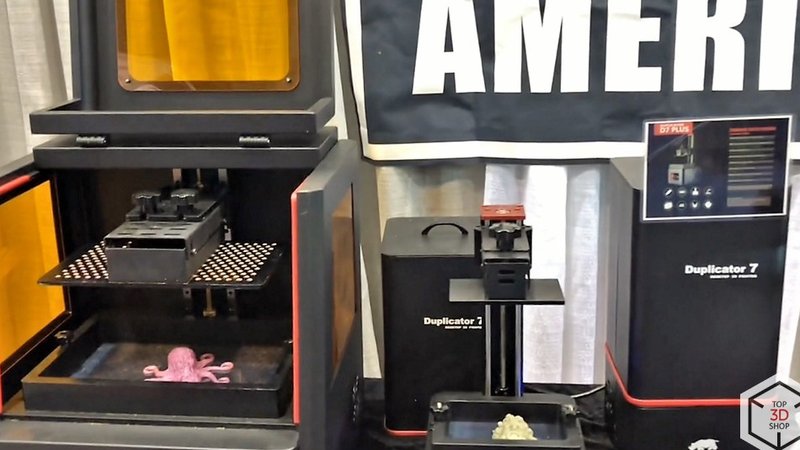 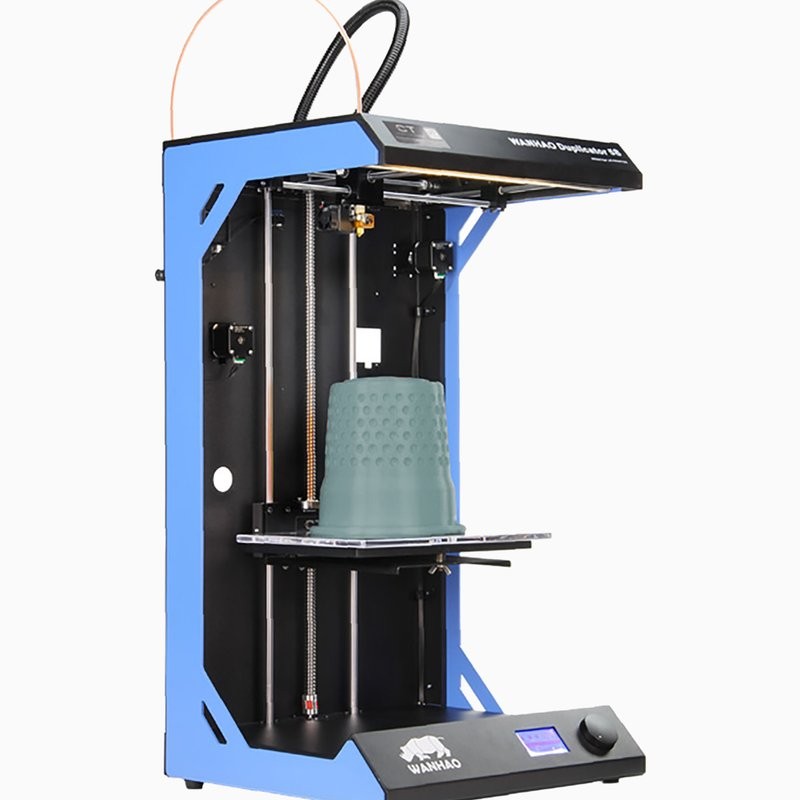 Wanhao Duplicator 5S is appreciated by professional 3D printer users — model builders, designers, and architects. The model has been specially constructed with the Bowden extruder that has a fast printing speed and high accuracy, and features the innovative system of nozzle cleaning. The printer is compatible with 3.00 mm diameter filaments. It does not have a heated plate in the basic delivery set, but it can be obtained and installed separately, which will considerably expand the choice of available print materials. 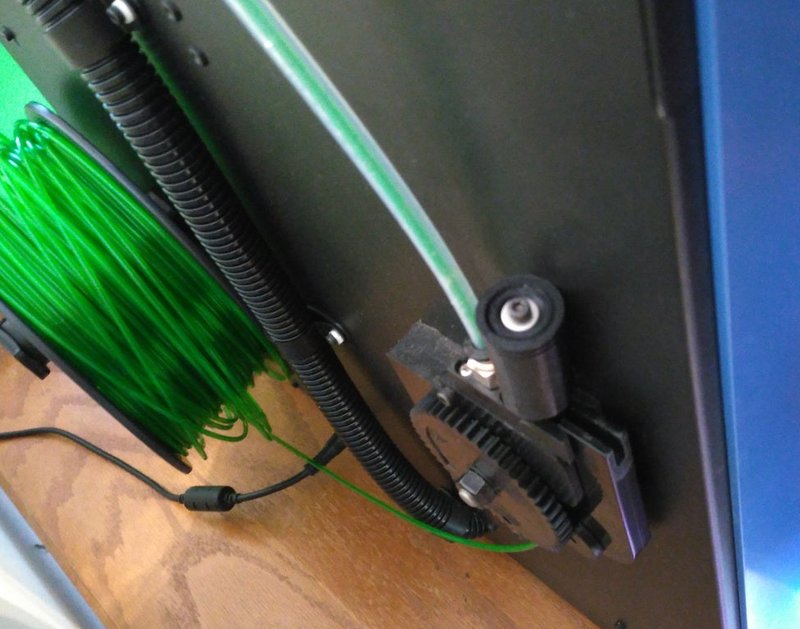 In order to increase the durability and rigidity of the whole construction, the printer’s frame and unit mounts were significantly improved and simplified as compared to the previous models. The printhead moves along the Z-Axis with the help of a steel threaded rod (16 mm). Advanced stepper motors have the capability to run the printhead at speeds in excess of 300 mm/s.

Custom endstop switches protect the printer from damages, even if there are mistakes in the print file. A built-in cooling fan reduces warping issues when printing at high speed. The level of noise during printer operation does not exceed 46 dB. The Duplicator 5 series is designed with Arduino© microcontroller, which is located in the protective housing. There is a user-friendly touch screen display and a circular dial touch controller for settings adjustment. 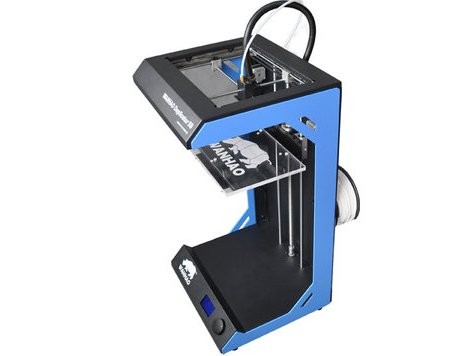 Despite the fact that Wanhao Duplicator 5S is very large, it is delivered completely assembled. In order to support this heavy construction and print big objects without distortion, the device is built with new Rock XV Steel ExoFrame. It is made from robust and tough rolled steel with powder coating. At present, the frame is available in only Blue. 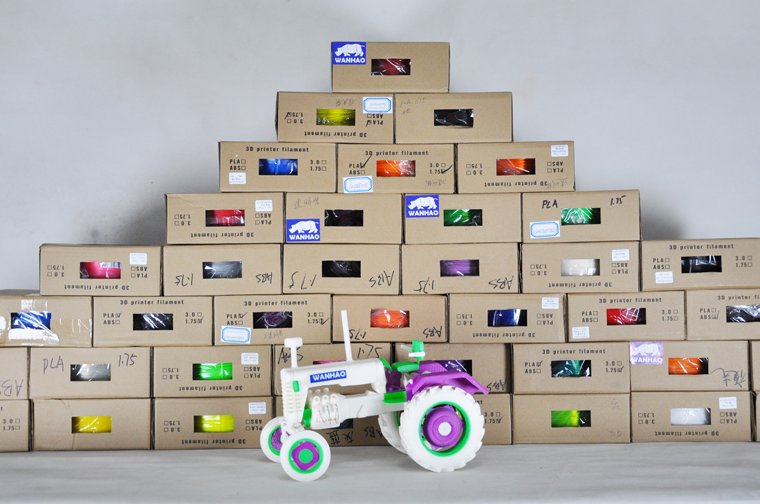 Equipped in its standard configuration with a single-nozzle printhead and an acrylic plate without heating, the model does not print with anything except PLA/PVA filaments. In order to print ABS and other filaments, you need to install a heated glass plate. D5S can be also equipped with a dual extruder that allows for support material and multicolor parts to be printed. 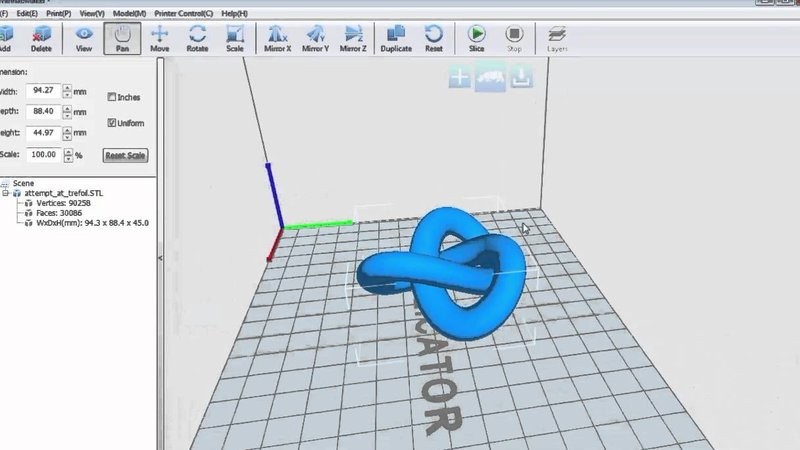 Wanhao Maker is a proprietary software package developed specifically for the Wanhao Duplicator 5S series. It converts .stl into .I — the file format utilized by this printer. Wanhao Maker is preconfigured to work on every Duplicator 5S and contains ready-made profiles for all popular and proprietary filaments. Along with converting different file formats for 3D printing, the software can also scale, position, and fix models. Besides, there is the printer firmware update utility. 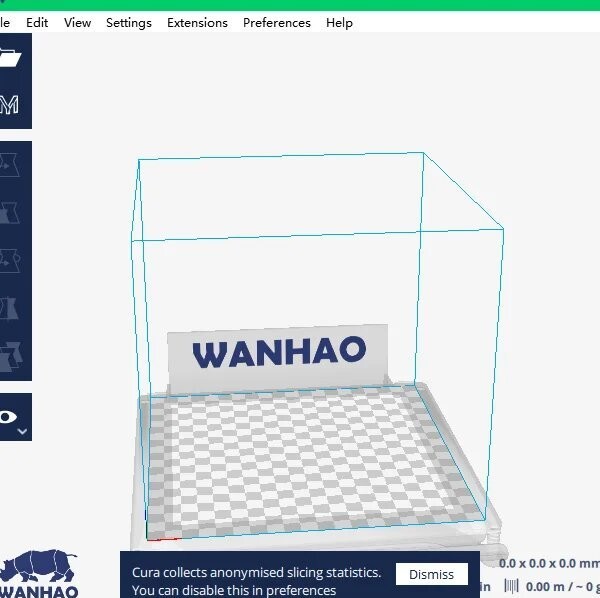 Cura is an open-source slicing engine for 3D printers. Its development process can be tracked on GitHub. Cura Wanhao Beta Edition slices a model file into layers and generates a set of G-Code instructions, specific to your printer model. The printer reads the G-Code files and prints the physical object layer by layer. Cura is compatible with most 3D printers available in the market and supports files in the most common 3D formats, such as STL, OBJ, X3D, 3MF, and graphics file formats, such as BMP, GIF, JPG и PNG.

Comparison with Other 3D Printers 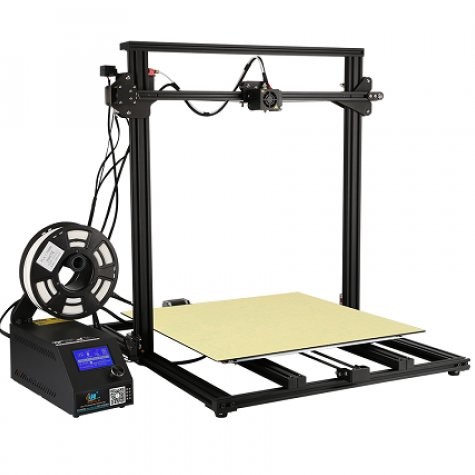 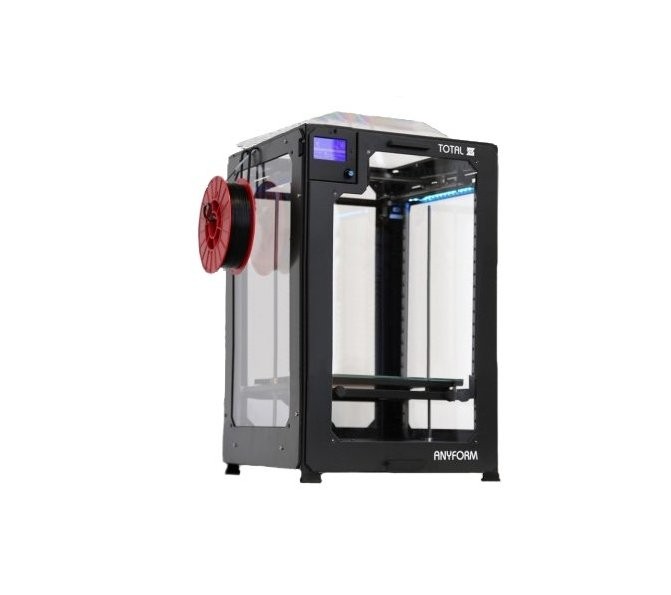 With almost the same printing capacity, Wanhao Duplicator 5S occupies the price niche between consumer-grade 3D printers and professional models with an enclosed build chamber. It is worth noting that D5S is on par with considerably more expensive models in terms of print speed and resolution. 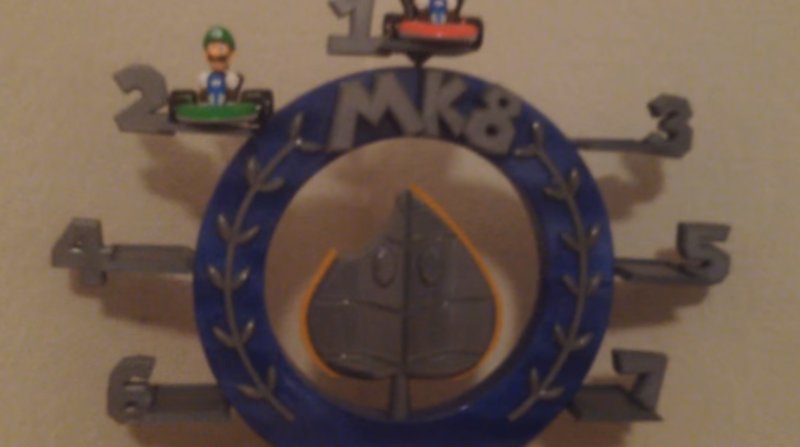 RedDog uses 3D printers for the production of souvenir gifts. He has long used D5S for big 3D prints.

“The Official Nintendo Power Group MK8 Trophy. My largest & longest print project so far. Drawn in AutoCad, sliced in Wanhao's software, Printed on my trusty D5S, and assembled with remote control LED light strip inside. Material used is all PLA, With XTC-3D coating on some parts (the shiny bits),” — RedDog says. 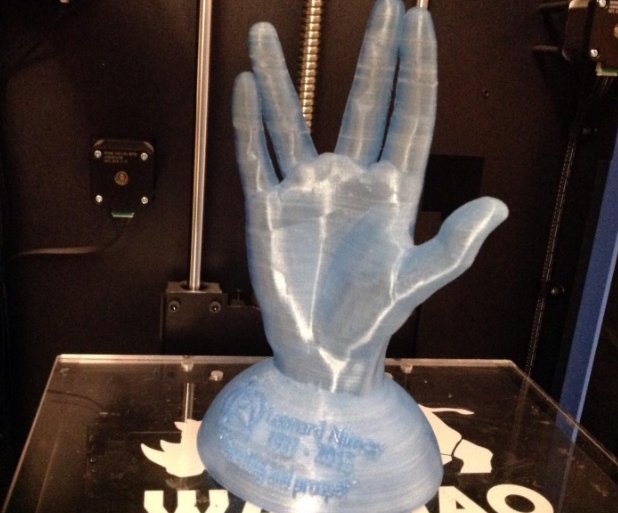 Rick Wilber has recently bought Wanhao D5S and is very pleased with print results. He is planning to upgrade the device.

“This printer prints as well as my MakerGear 3D printer. I love the large print volume this printer has. The first print was outstanding looking, the 2nd print I made after a little tweaking, was gorgeous!

The downside is no build plate heater, so printing PLA is all you reasonably do. I did order the heater add-on, so I could start printing ABS. So no comment on ABS until I start using it. This printer is build like a tank, very good engineering. The slicer software that comes with it, is just ok, and has the basic features only. The file format is not a standard one, but the slicer software will generate the correct file. Has the ability to have duel print heads, everything is already there to mount in place,” — Rick writes.

Installation of a heated plate, by Manolo Chen 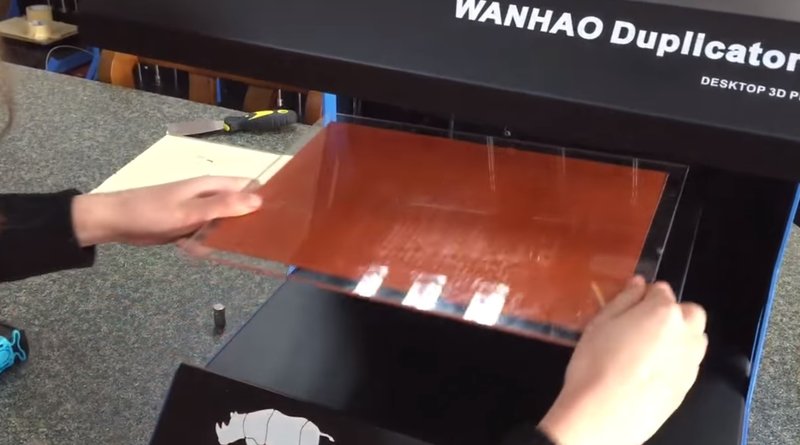 Manolo Chen has a YouTube channel, devoted to Wanhao printers. There he tells about their construction, upgrading, and the ways to enhance the print quality.

“Original D5S series printer can’t print the filaments that do not adhere to the cold build plate, as the object does not keep fixed. In order to print, for instance, ABS-based filaments, you should replace the acrylic build platform that comes fitted with the printer to the glass one with a heating element. This will not be hard: you just need to take off the acrylic platform, stick several magnetic connectors and then put a new platform onto them. That’s all, you can start printing,” — Manolo explains.

Body frame and ventilation, user I Think I Know It

I Think I Know It has a YouTube channel where he provides DIY advice and tells about additive technologies. He frequently makes some significant upgrades to his devices.

I Think I Know It says: “My neighbors complained about some sounds from the printer, so I built a small cabinet for it. After that I faced the problem of the printhead and I had to make additional ventilation. Actually, the printer looks a bit like Frankenstein, but it gives better small prints now.” 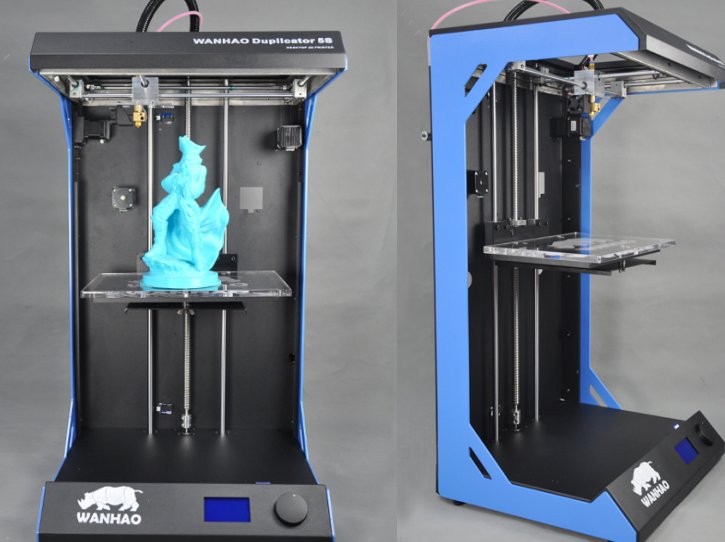 In spite of the fact that Duplicator 5S is not as flexible as other printer models, it perfectly does what it is made for — prints large models with FDM technology. Using innovations, such as top-quality stepper motors and the Bowden extruder, Wanhao’s engineers created a user-friendly, reliable, high speed, and accurate machine, which can be upgraded for printing other materials or several filaments at a time. And all this — at a very low price.

Order an affordable and high-quality 3D printer Wanhao Duplicator 5S at Top 3D Shop — and receive the manufacturer's warranty as well as the best service possible.

Creality 3D: Company History and Review of the Current Lineup