FlashForge Dreamer is a high-quality 3D printer featuring a closed print chamber and capable of printing with two colors. Find out more from the video and article below. 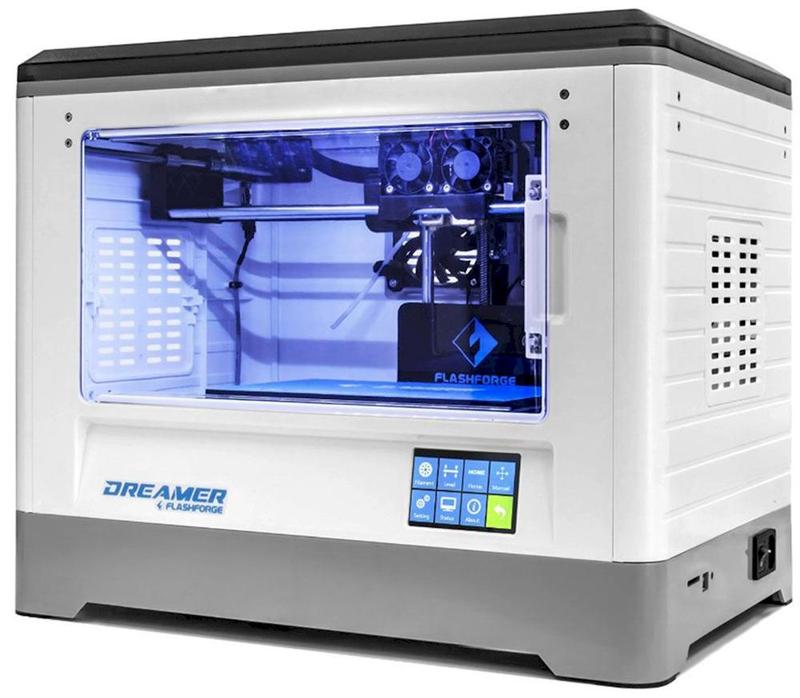 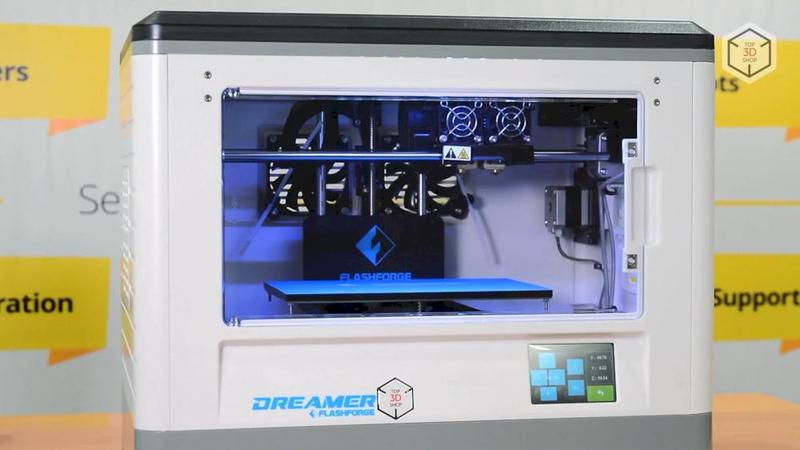 Dreamer is one of the most popular FDM models in the lineup of FlashForge 3D printers. This refined device was released in 2016 as a substitution for Flashforge Dreamer NX; now it features an enhanced dual extruder. 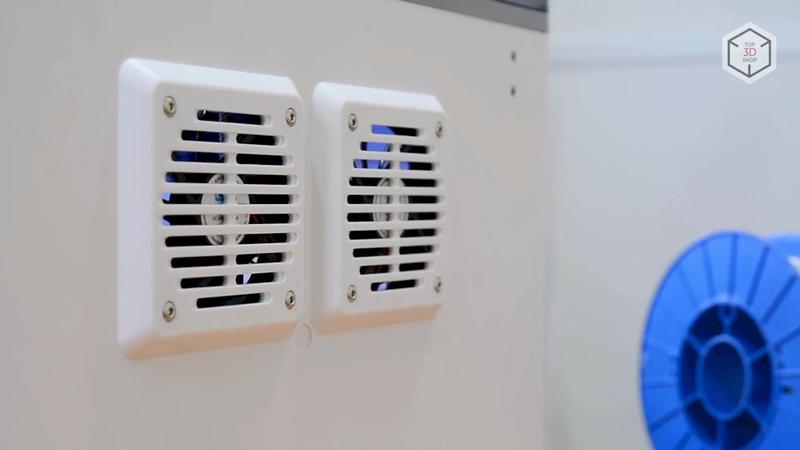 The printer’s body frame is completely enclosed, which allows users to print with temperature sensitive plastics. The transparent door on the front panel and the removable top closure help prevent leakage and intrusion of dust into the build chamber.

There are two blower cooling fans on the printer’s back panel; its side panels are equipped with removable vent grills for the maintenance and replacement of filament. This air blowing system is doing a great job of maintaining desired temperature inside the chamber. 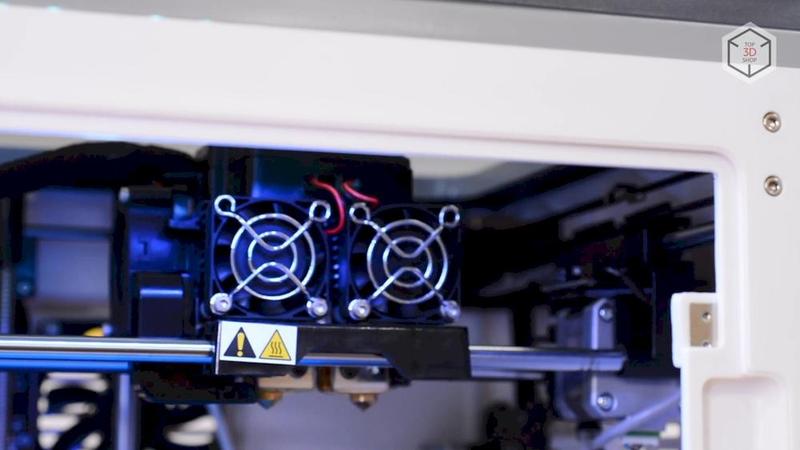 The model has standard kinematics. The print heads move along the X/Y axes, while the platform moves up and down — along the Z axis. 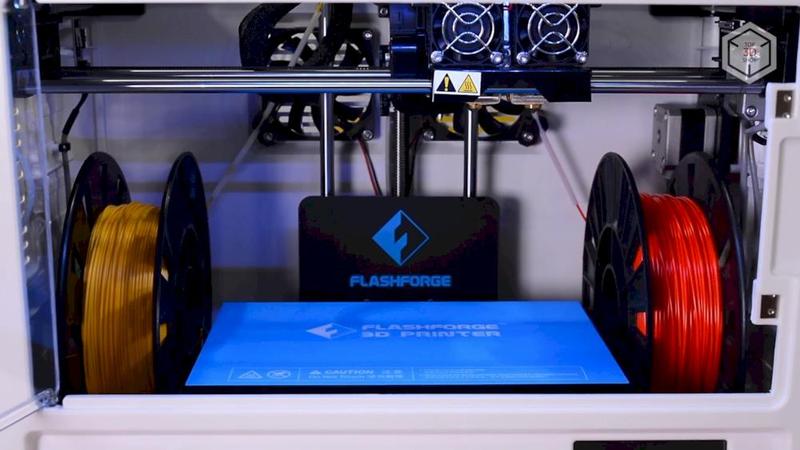 The filament spools are located inside the printer, on the side panels. According to the manufacturer, such a solution not only protects the filament against external influences, but also makes it a little drier, which increases the stability of printing. There is little room inside; thus only spools of up to 0.5 kg can be placed there. If you use larger spools, you should place them outside the printer; the removable grills on the side panels make it possible. 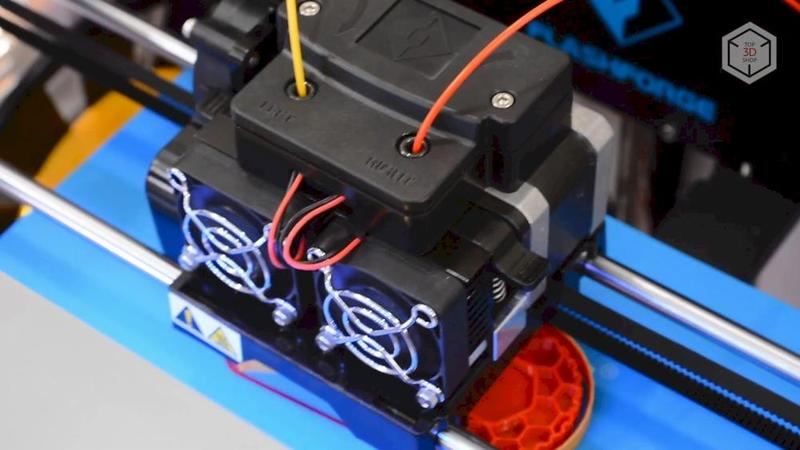 Probably, the major feature of Flashforge Dreamer lies in its dual extruder. It allows users to print with two colors or implement support materials, such as PVA and HIPS, for the creation of more sophisticated models.

The manufacturer claims that the minimum layer resolution is 100 microns and, as some owners stated, here the manufacturer was “too modest”: the printer’s software allows us to set up half the layer height and print with the resolution of 50 microns. Thus, the layers of plastic on a finished model become even less visible.

The patented construction of extruders, as the developer claims, supports a wide range of materials: PLA, ABS, Nylon, HIPS, Flex, and more. The filament diameter is standard — 1.75 mm. 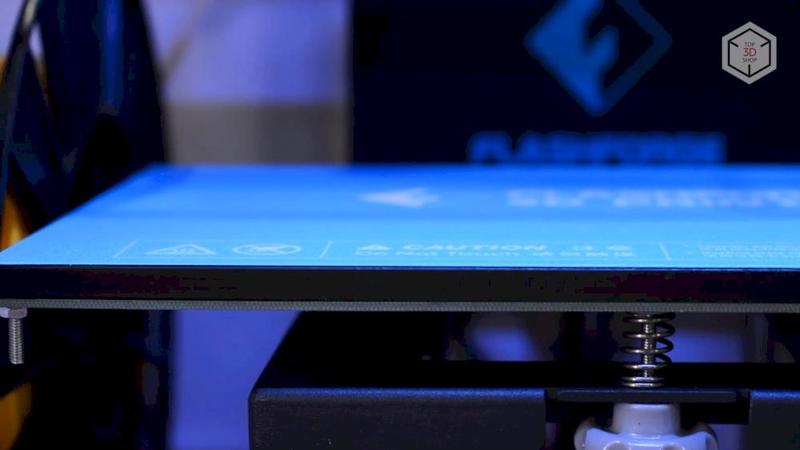 The model is equipped with a print bed that can heat up to 120°C. The platform is made from 6.5 mm aluminum alloy — along with the enclosed chamber and the opportunity to maintain a stable temperature inside the device — facilitate the process of printing ABS. 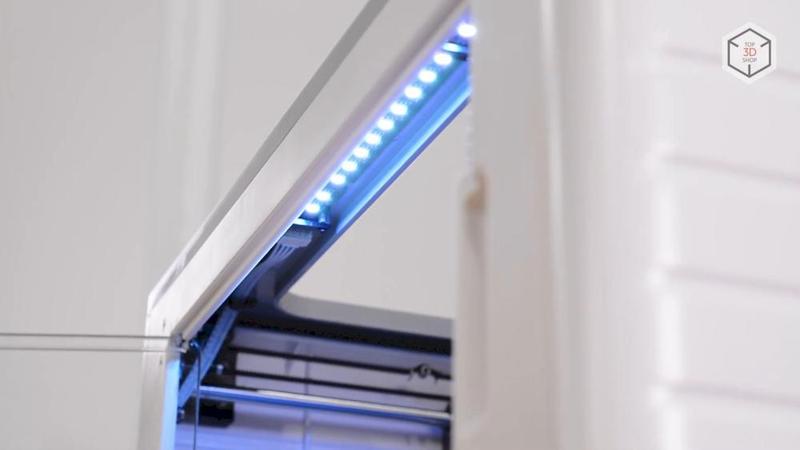 This FlashForge model is fitted with the backlighting system — inside the device there are LED strip lights with customizable light regimes. 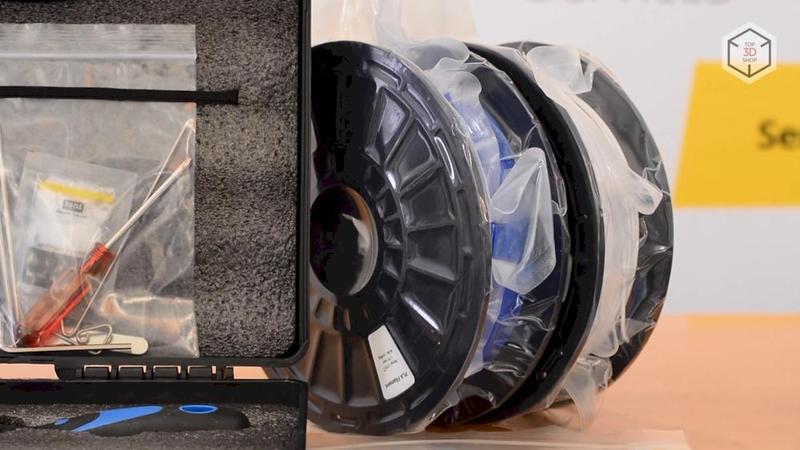 Flashforge Dreamer is supplied fully assembled; it will take just a couple of minutes to get it ready for printing. All the processes are described in detail in the user manual, which is also included in the package. 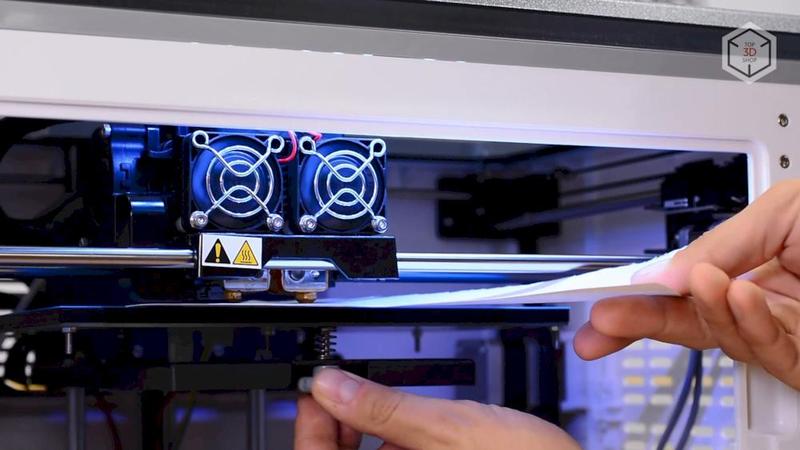 The calibration of FlashForge Dreamer is performed in a common way, using three leveling points. Thanks to the perfect assembly of the device and the use of quality materials, this procedure is rarely necessary. 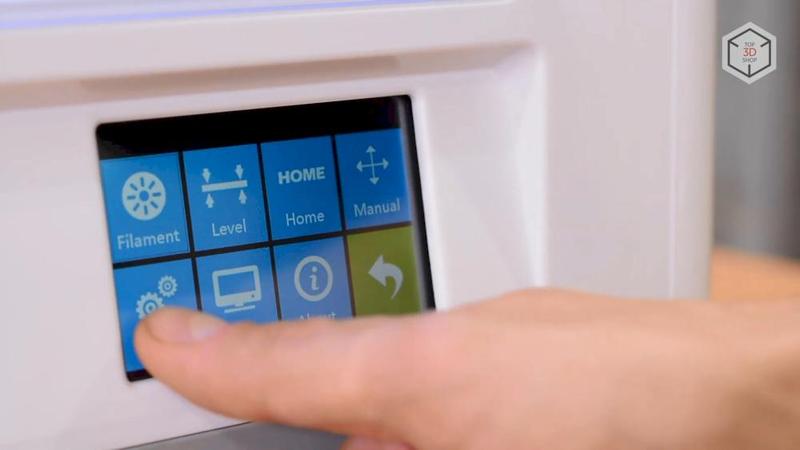 Flashforge Dreamer features ARM Cortex-M4 CPU, which turns it into quite a rapid machine. A 3.5 inch color touch-screen display optimizes the operation of the device. One can initiate printing, monitor and tune the temperature of the extruder and the print bed, load and unload the filament, update the firmware, and perform a number of other activities via the directive screen. The touch-screen display supports English, German, Dutch, Polish, French, Korean, and Japanese languages. 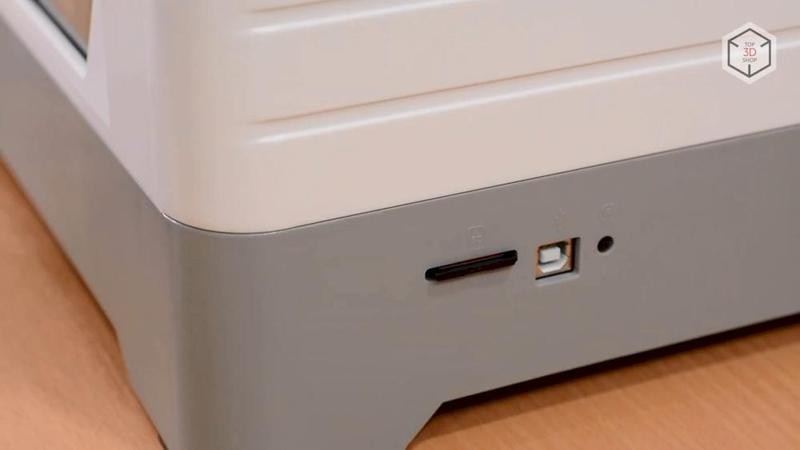 The 3D printer is equipped with a Wi-Fi module, so that a user could send a print-ready file using a wire-free connection or by standard techniques — via USB connection or with an SD card. As for Dreamer itself, it has 4GB of integrated memory. If a computer crashes or suddenly turns off, the printer retains access to the model for consecutive printing. 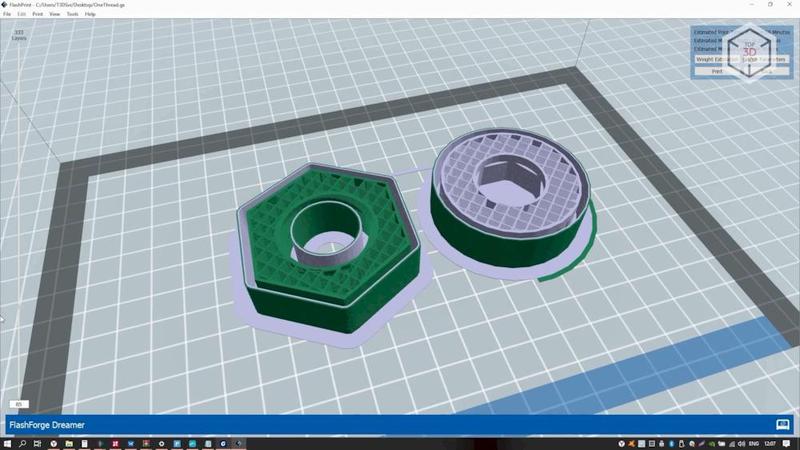 Flashforge recommends users to perform file preparation using the proprietary FlashPrint slicer. It supports Mac, Linux, and Windows. Being intuitive and easy-to-operate, FlashPrint allows users to upload a model file (STL, OBJ), convert it to G-code, customize several temperature and cutting parameters or use one of many presets that are already included; after all that, you can initiate the printing process. The standard software displays an observable progress model in the course of printing, material management, and time until completion.

The software’s enhanced capabilities let users arrange the support points manually, set up the speed of printing, change the thickness of the first layer, customize the parameters for scheduled stops, break models down into several sections, and convert 2D images into 3D bas reliefs. 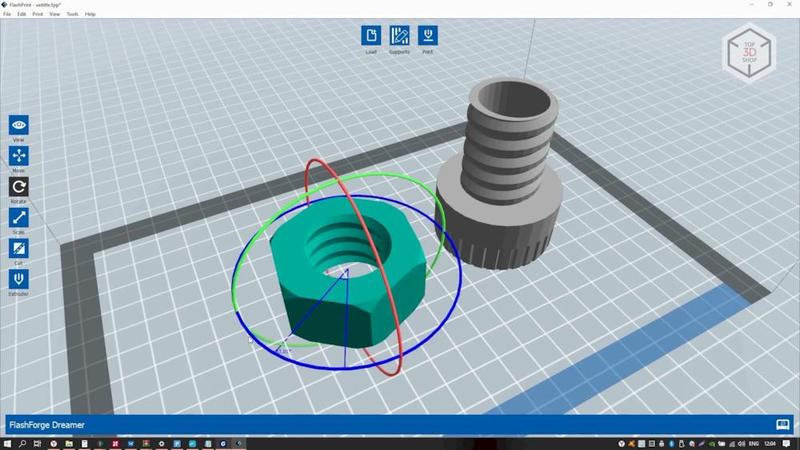 It is worth noting that Flashprint has one more advantage — the opportunity to control multiple printers at the same time via the Wi-Fi connection, which is very helpful for those who want to set up a 3D FlashForge printing farm.

The chief shortcoming of the vendor furnished slicer is the lack of settings, which could be adjusted in the course of printing, and the support of the standard 0.4 mm nozzle diameter only. Experienced users can use any third-party slicers, such as Cura, Simplify3D, and others. 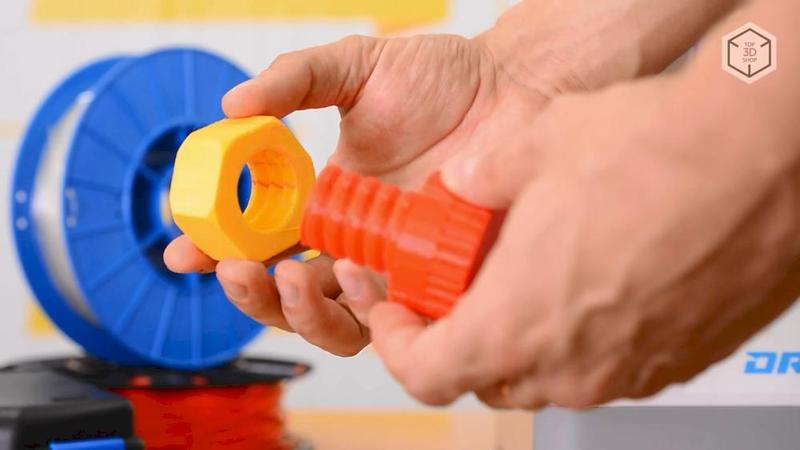 The models printed on the FlashForge Dreamer with the default settings are not as smooth, as those created with the use of more expensive models. However, they meet adequate quality standards for functional prototypes and home use. 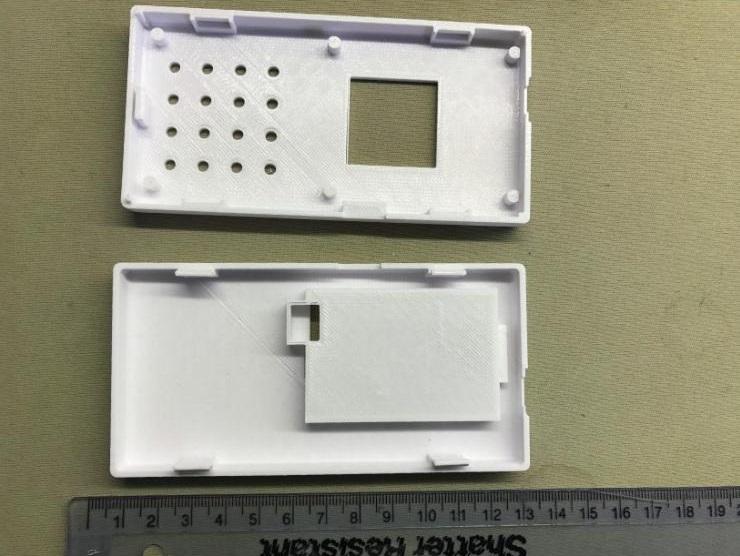 ”This is my first 3D printer. I wasn't sure what to expect. The setup was straight forward, the software was easy to install and use. Within the first hour you can easily get your first print going from the test prints included on the SD card.

When choosing what printer to buy I was torn between the Flashforge Dreamer and the Dremel idea builder. I chose the Flashforge because of the dual extruder feature which means you can keep two different filament types and/or colours in the machine at once, allowing you to print with them individually or both at the same time if desired. The other feature I liked over the idea builder was the heated bed, which means you can print a wider range of materials including ABS. I used the printer extensively during the first two weeks after purchase and I feel I have got to grips with the capabilities of the machine. I had most success with PLA prints.

I will include some images of my first test prints. These are all done in PLA.” — tells MR C. 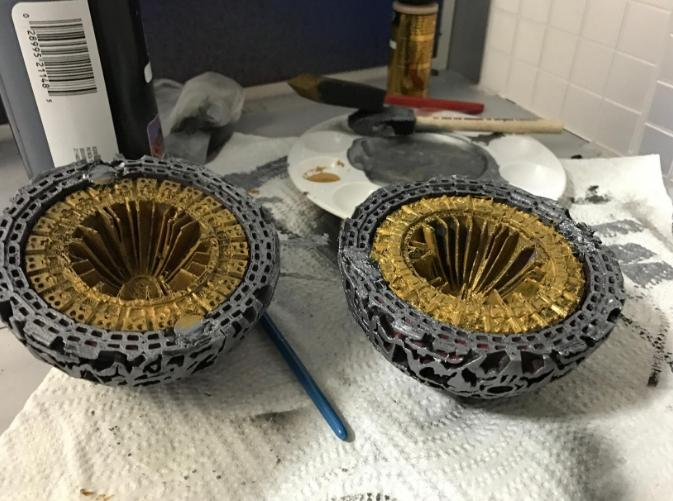 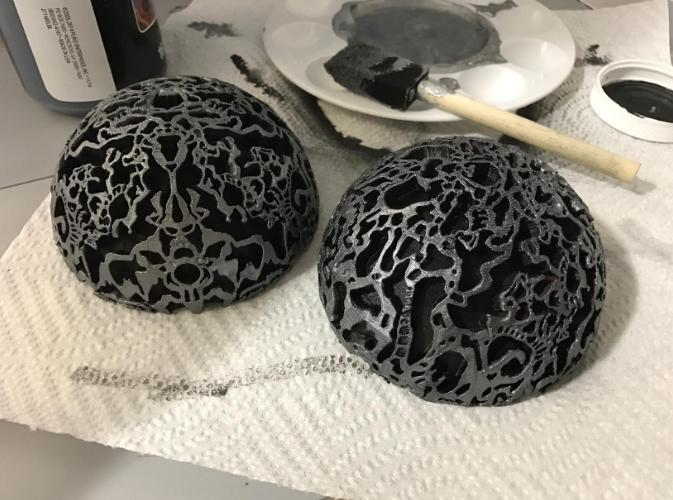 “I have had this printer for roughly 2 months now, after 2 weeks, a fan on the bottom of the printer started making a grinding sound when the printer was heating up though would stop after 15 seconds, on week 3, the right extruder died and could no longer heat up. Flashforge was very fast at sending me a replacement printer, I have had my new printer for about a month now and I love it. The printer itself feels very solid and the print quality is fantastic. Having a heated bed and sd card reader are huge selling points. With the new printer I got, the left and right extruder were not level with each other so when printing, I could only use the lower extruder, though I watched a youtube video and was able to get it fixed.

I have now had the printer for over a year now, after I got the problem fixed when I first got the printer, I have not had any issues since. The printer is still amazing and my projects have gotten larger as well. If you want a printer that will last, this is your guy!” 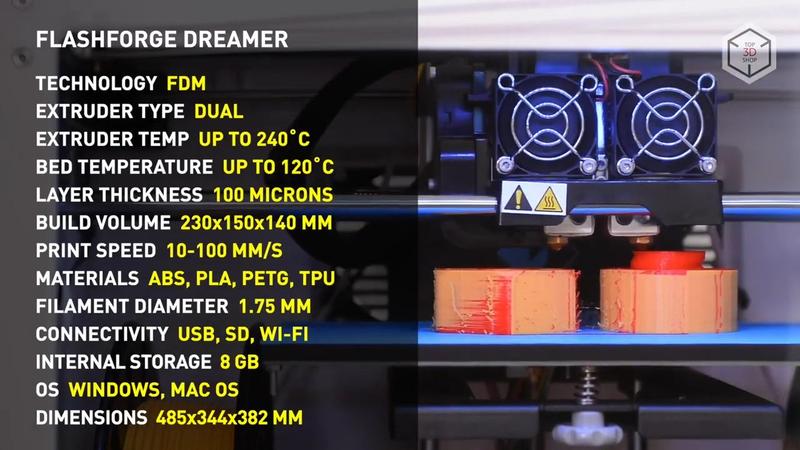 So, in this review we found that FlashForge Dreamer has the following benefits and drawbacks:

Reliable, user-friendly, and ready for printing right out of the box, FlashForge Dreamer — despite some imperfections — will surely find its place in houses, educational institutions, and businesses engaged in prototyping and providing printing services. 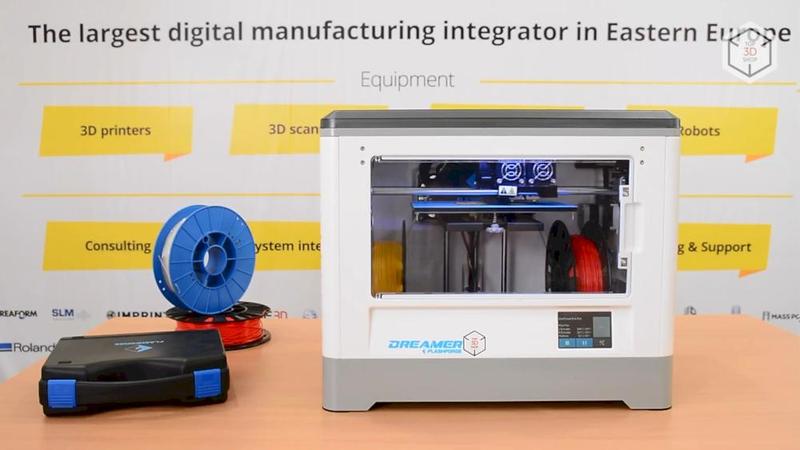 Still hesitating about your choice? If so, contact our specialists via the live chat or the online form on our website.