3D printing technologies initially emerged with the aim to simplify prototyping during development and design. But these days 3D printing use cases include manufacturing final models.

Among various additive printing technologies that use different filaments and 3D printer designs, Selective Laser Sintering (SLS) stands out with its relatively low price and mechanically strong products, including those that have practical usages.

From this article, you will learn all about SLS technology, namely its working principle, benefits, industrial applications, the materials that can be used, and compare it to other common 3D printing techniques.

Using the Sinterit Lisa Pro printer as an example

The term SLS, or Selective Laser Sintering, is typically only used to refer to plastic and ceramic 3D printers — metal 3D printers using a similar process are referred to as DMLS or SLM machines. 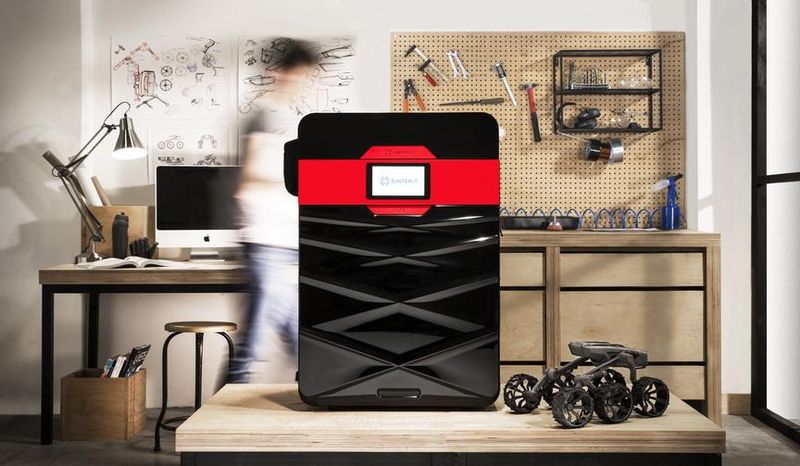 The working principle of the SLS technology is selective sintering of  the powder using a high-performance IR laser that fuses powder particles together. A regular SLS 3D printer has a so-called feed bed, where the recoater places a thin layer of powder. Then, the laser will fuse its particles according to the 3D model, working on the layer-by-layer basis. 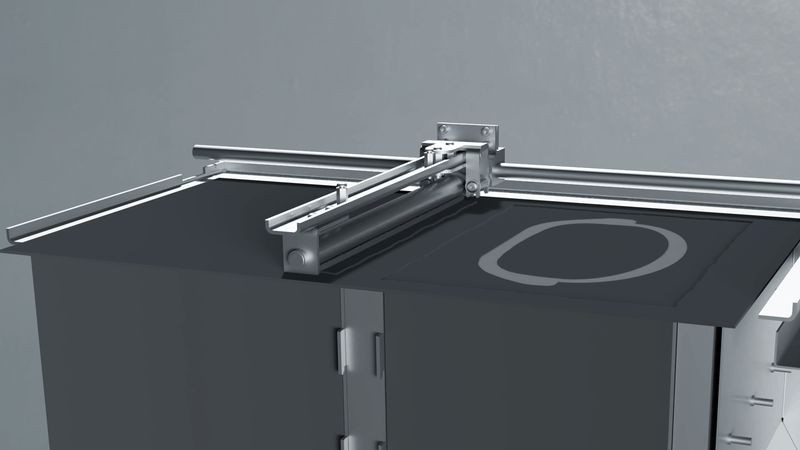 After selective sintering, the platform lowers by one layer thickness and the process is repeated until the last layer is formed. 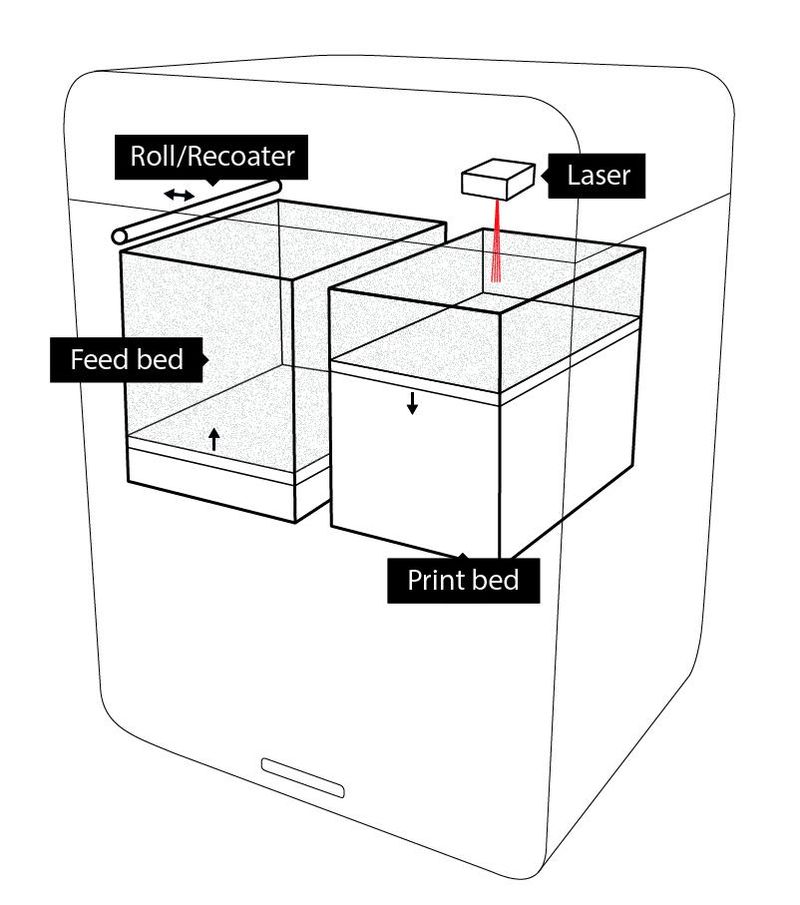 In the end, the new part appears. It requires removing the product out of the non-fused powder and optional post-processing with special sandblasting equipment.

This is the main advantage of using the SLS technology. In contrast to FDM, there is no need to create support structures, which is important for industrial parts with complex geometry and intricate design. The powder acts as a support and nothing else is required. This also allows for printing over the whole build volume, placing any amount of parts  you need. 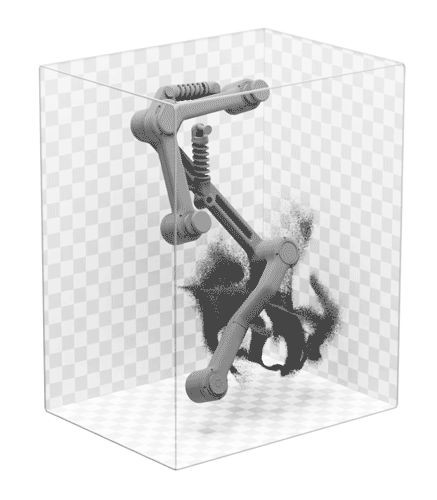 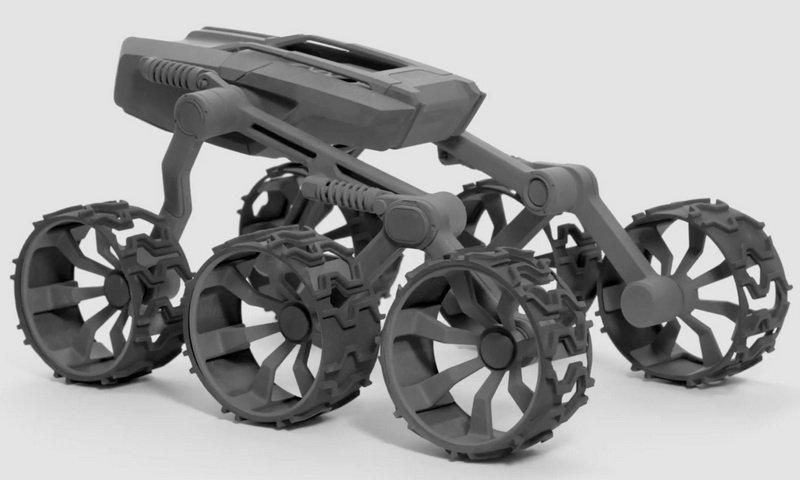 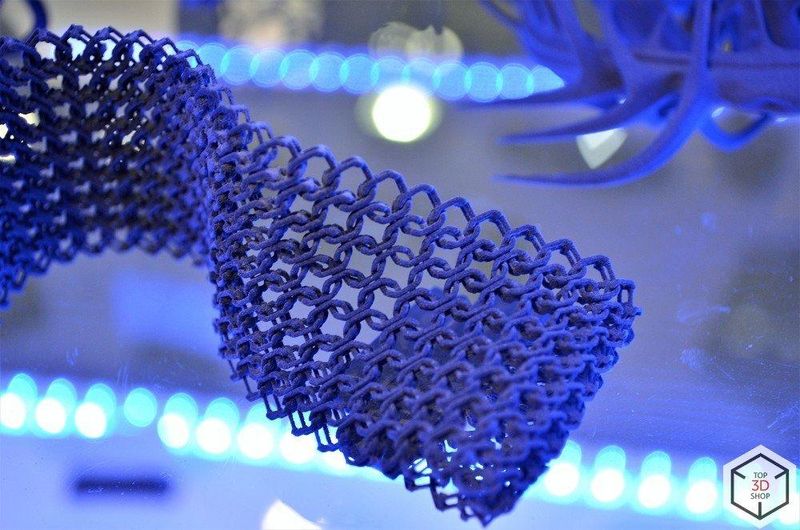 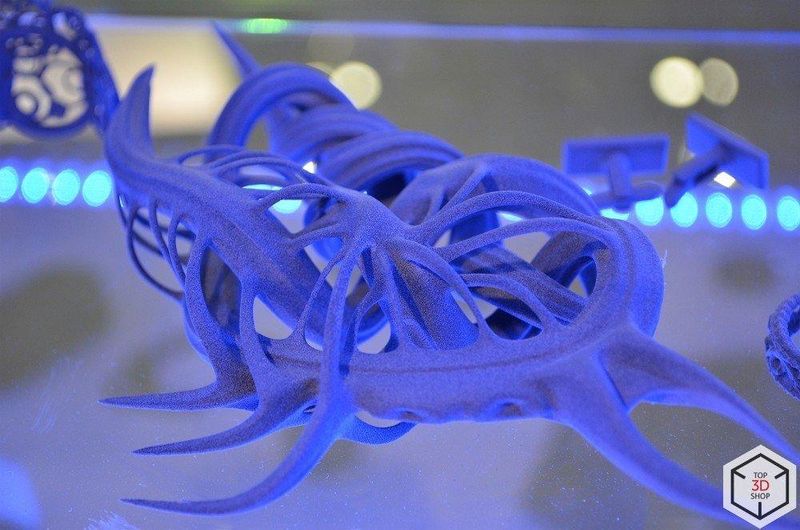 Comparison to other technologies 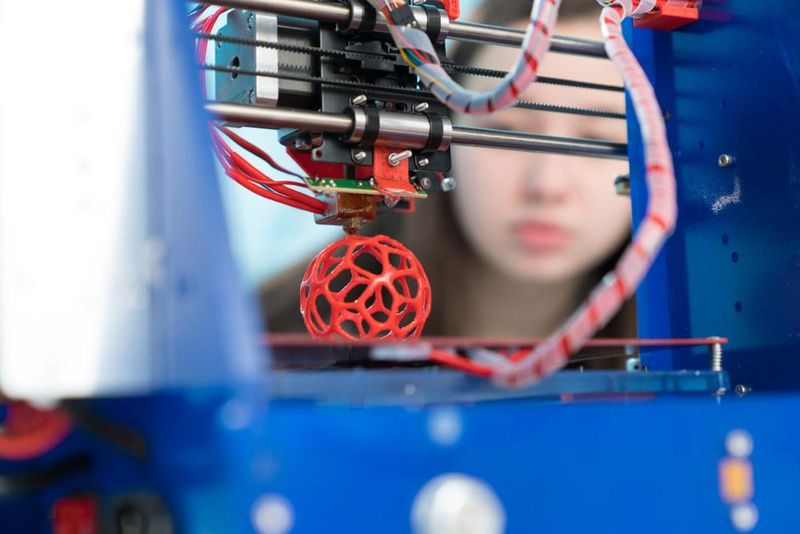 Fused Deposition Modeling (FDM) is the most common technology for personal and professional desktop 3D printers. It is based on melting filament and extruding it on the print bed layer by layer — matching the outline of a digital model. Printing involves using thermoplastic polymers and composites such as polylactide (PLA) and acrylonitrile butadiene styrene (ABS).

The technology is most widely used in  functional prototyping, hobbyist printing, custom printing, and education. There are different types of filament material available with various mechanical and chemical capabilities.

The main advantages of using the FDM/FFF technology: a wide range of inexpensive and well-studied materials with known properties, relatively steep learning curve and easy-to-use machines, low price of the final prints. 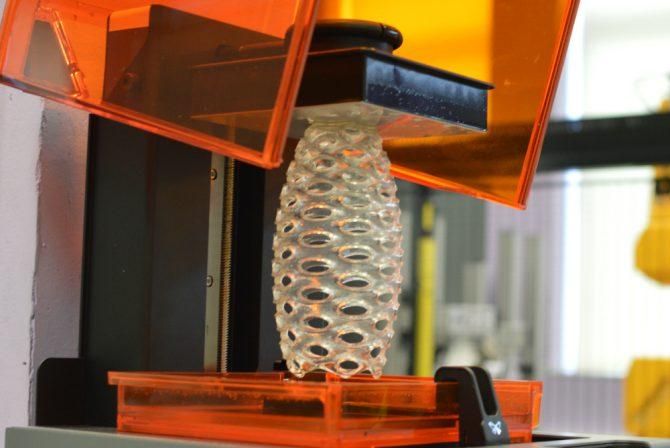 The working principle of this technology is based on photopolymerization—the process of solidifying liquid polymers under the light. The machines that use this technology basically shine a light on a photosensitive resin that includes a solidification reagent. The resin becomes a solid plastic under the light. The main difference between resin 3D printers is the light source. The stereolithography (SLA) involves using a laser, digital light processing (DLP) 3D printers use projectors, and LCD printers use liquid crystal displays and LED backlights with quite a long service life, which is their advantage.

Stereolithography (SLA) was developed in the 1970s and was the first practical 3D printing technique. Printing involves using specially developed liquid resins which are exposed to the UV lasers that ‘draw’ the object on a layer-by-layer basis. SLA printers are not cheap or rapid, but it’s compensated by an increasing printing accuracy. The laser isn’t fixed and the light moves smoothly, so the finishes are smooth as well.

The SLA technology is used in the dental industry and jewelry making to build highly detailed prototypes, master models, and prints. Some resins allow making templates for metal casting and biocompatible materials for dental and surgical purposes. 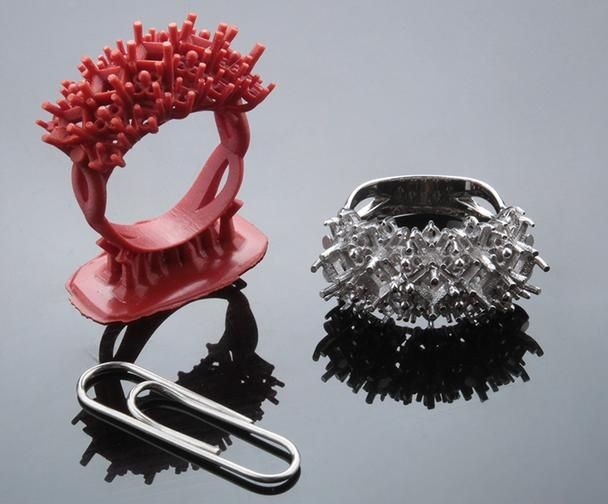 As was mentioned before, DLP printers use a projector to shine a light on a resin. This way the printer can flash the whole layer of the part at once, unlike the SLA where the laser slowly works its way.

This method makes the printing faster but it comes at a cost—if you compare SLA and DLP prints, the latter will have visible pixels on the smooth surface.

Thanks to its high speed, DLP is used for prototyping, small-scale additive manufacturing, as well as in dentistry, jewelry making, and the souvenir industry. 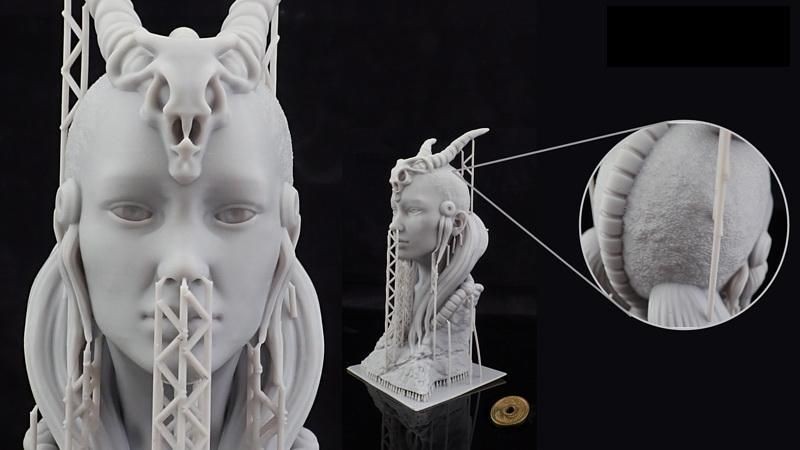 LCD is another resin 3D printing technology. LEDs placed under the LCD screen (the same principle that’s used in smartphones) flash the light on the resin. The image is formed on the LCD screen on a frame-by-frame basis. The first advantage of using LCD printers is a price that is several times cheaper on average than SLA and DLP. The shortcomings include the print area being limited by the screen size and ambient lighting that happens due to a lack of focusing systems in the majority of LCD 3D printers. This will reduce layer printing time which diminishes the quality.

The usage of LCD 3D printers is mostly similar to the DLP ones. But the image transfer process is significantly simpler in LCD technology, which enables the enthusiasts to build DIY 3D printers for home use.

Let’s review the main parameters that influence the quality of 3D printing and consumer choice, based on the features of different technologies. 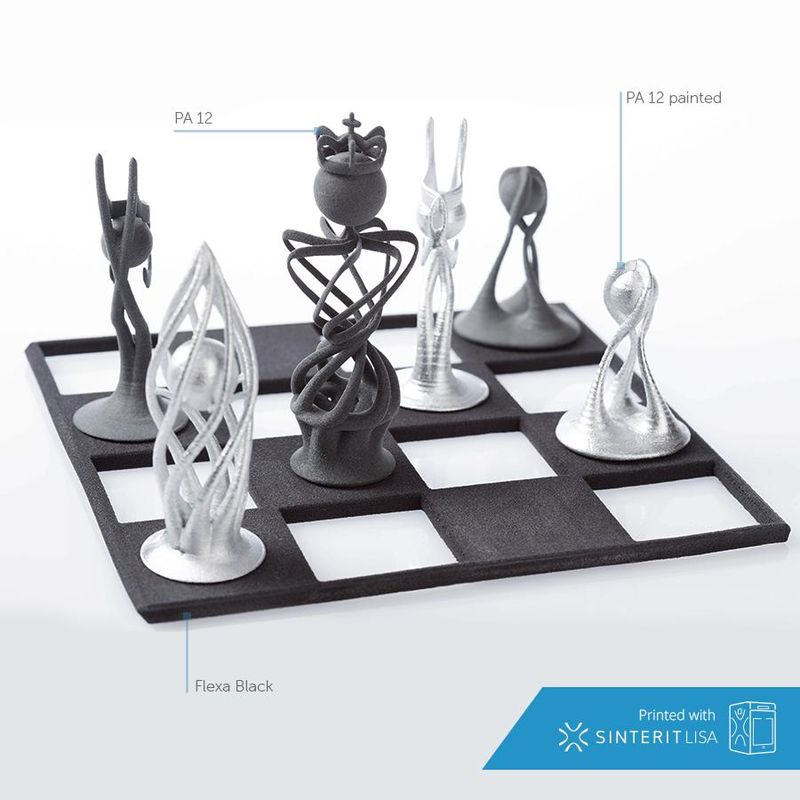 The range of materials that can be used for SLS printing is rather wide: from metal powders applied in automotive manufacture to polyamides like the Sinterit PA12 Smooth – a nylon 12 powder, thermoplastic polyurethanes (TPU) such as Flexa Black, and carbon fiber. The powders can be modified for certain purposes, so everyone can get the desired mechanical properties out of their printouts. 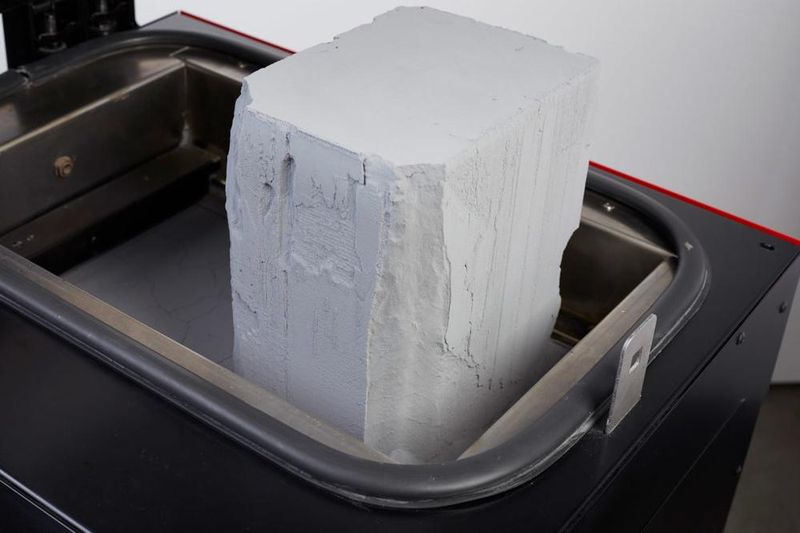 It’s interesting that SLS is a zero-waste technology because the non-sintered powder can be recycled for the next prints again and again.

The important point is the recycling of used powder and its refresh ratio—the amount of new powder that must be added to maintain print quality. The powder can be reused with a fraction of new one, but some powders are prone to quick oxidation and require a neutral gas atmosphere (such as nitrogen) to maintain the quality. The Sinterit Lisa Pro printer offers a solution by using a nitrogen intake. 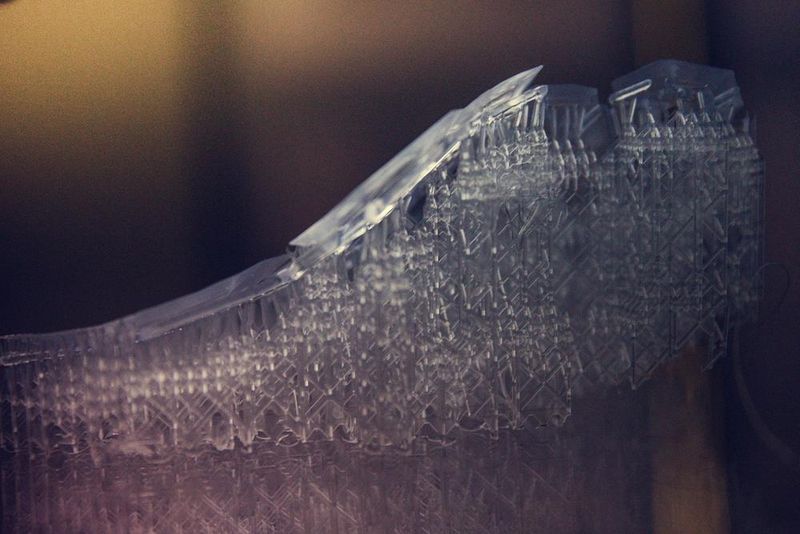 Microphotograph of a print made using the SLS technology.

First, we should understand how universal the SLS powders can be regarding their mechanical properties and why you should choose one powder over another. There are special requirements for powder consolidation.

It’s important to understand the differences between the two main powder categories: metal and polymer. The former is mainly used in automotive and aerospace manufacturing, while the latter covers prototyping, medical and educational purposes and short-scale manufacturing of non-standard  end-use parts. 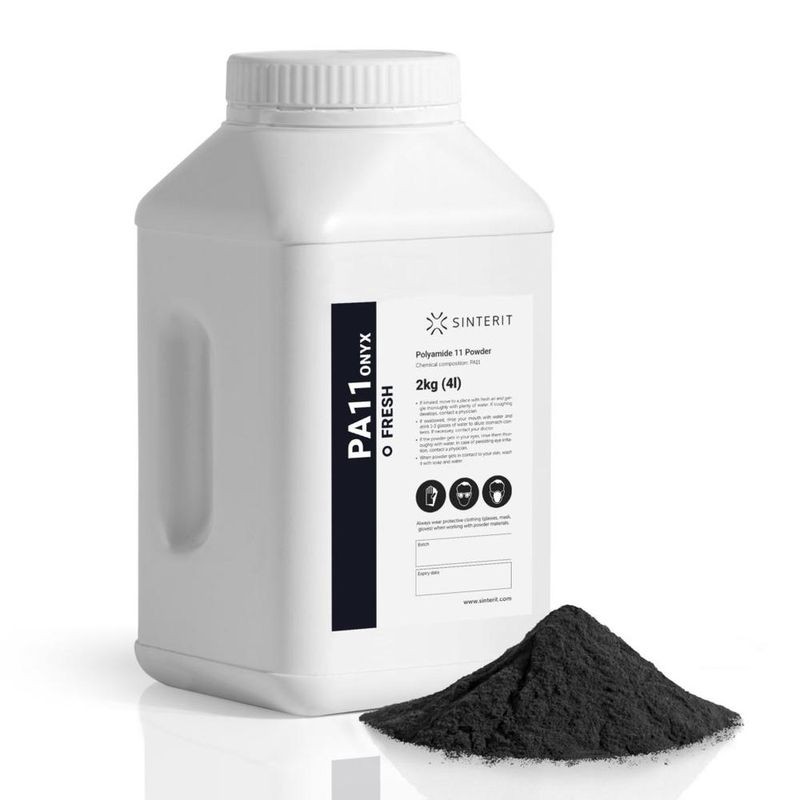 The first and foremost powder property is a temperature range of sintering. To review these processes we will focus on polymer powders such as polyamides (PA), thermoplastic elastomers (TPE), and thermoplastic polyurethanes (TPU).

A polymer is a molecule that forms in the chemical reaction of polymerization—the process of joining together monomer molecules. We are surrounded by materials that consist of polymers. Plastic bags and bottles are made of polyethylene (PE), polystyrol (PS), and other synthetic materials. Many polymers that are used in light industries can be adapted to be used in the SLS technology. 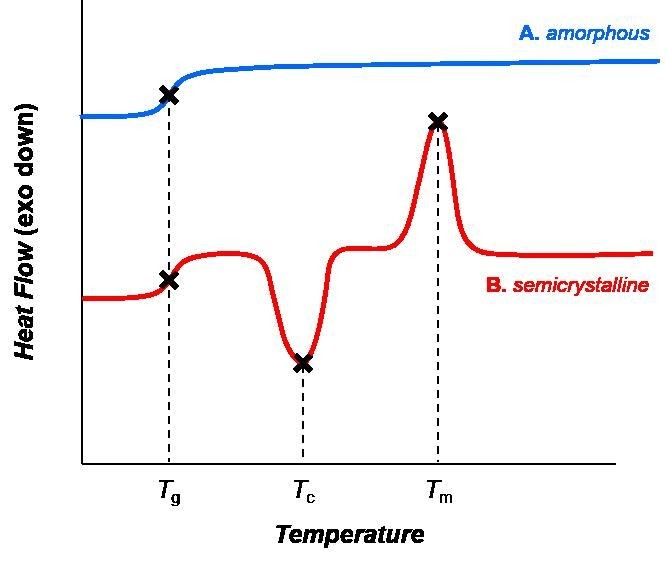 Polymers can have a crystalline or amorphous structure. It influences their physical properties that define their sintering temperatures range. For semi-crystalline polymers, the range lies between the crystallization transition and melting transition temperatures. For amorphous polymers, the range starts at the crystallization point and is artificially limited depending on the exact material—usually between 50—200 °C.

This range allows for particle diffusion and enhances the sintering process by creating a so-called neck between powder particles. When regulating the temperature, we should keep in mind that adding additives to powder can change the transition temperature, so we should monitor the powder, preventing it from completely melting. There also exists the coalescence process that creates a ‘neck’ between two merging in high temperatures particles. Imagine two spheres merging, slowly becoming an ellipse—a thermal fusion. 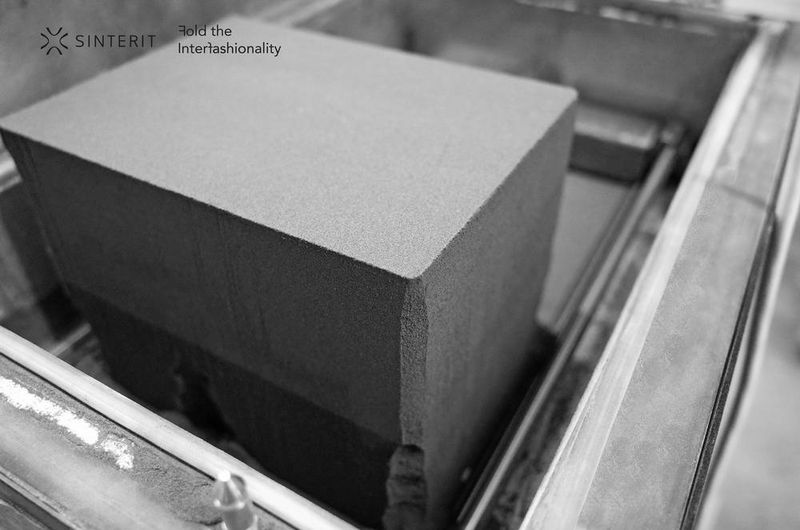 The powder consolidation ends with the powder being exposed to a laser and particles being polymerized, creating a uniform layer of fused powder.

Powder particles used in the SLS technology must have a certain size, ranging from 45 to 90 microns of diameter for optimal accuracy.

The list of properties that influence the SLS 3D printing process is exceptionally long, but some of them are especially important for printing quality and time. The list includes the powder properties listed above, such as sintering temperatures range and chemical characteristics that are most important for fusion. If the used material can’t absorb the laser’s energy, it can be mixed with some other substance that can absorb it, but the process is very delicate—the amount of absorbent and its properties need to be perfectly balanced. 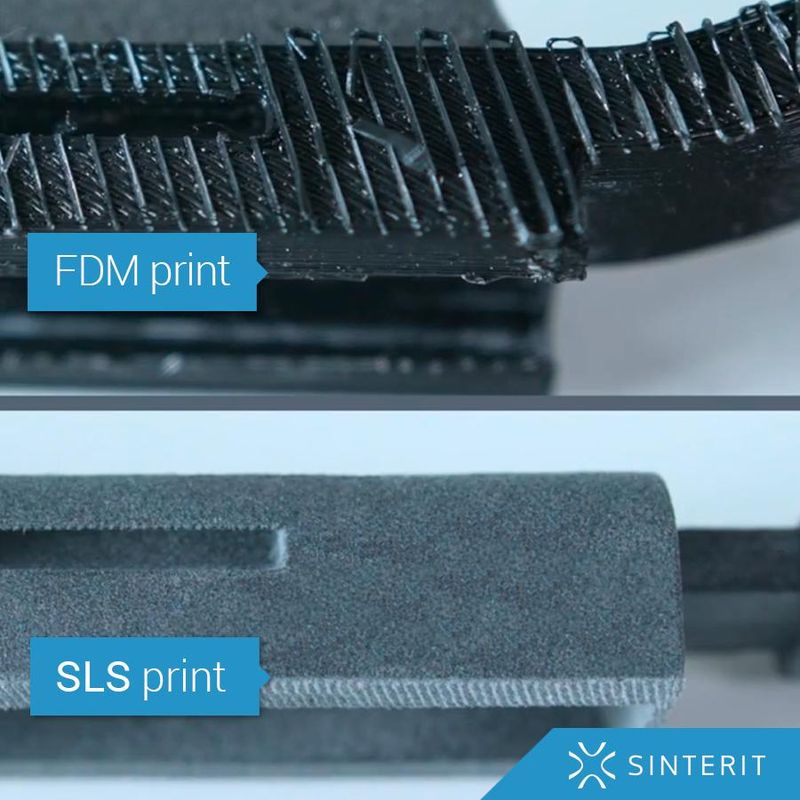 Keeping in mind the fact that almost every step in the SLS printing process can influence the mechanical properties of the final product, you can experiment with it. For example, you can choose between the solid, soft, resin, metal, and other powders. The easiest thing that you could do is to change the temperature and (or) other printing parameters in the software-allowed range. It can be easily done in the open parameters of the  Sinterit Studio 2019. The simple temperature regulation can change the mechanical resistance or quality of the resulting part. 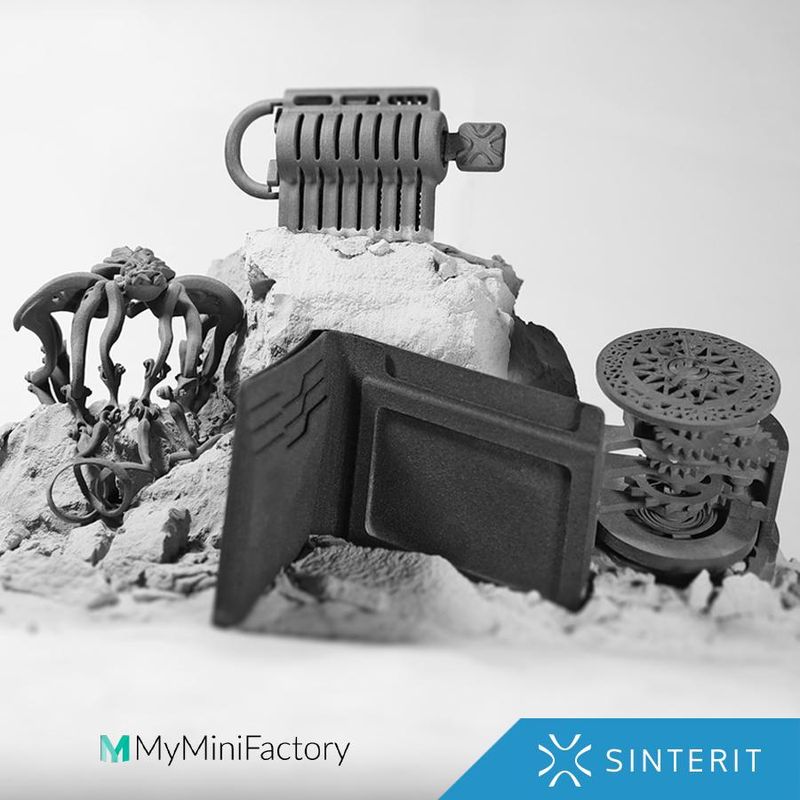 There are two main types of SLS 3D printers—industrial and desktop. The former are very expensive (tens of thousands of dollars), while the latter, such as the Sinterit Lisa series, are more affordable, costing a few thousand dollars. The main difference is the build volume, the ability to automate the production process, and the range of available materials.

The polymers such as Nylon, which is the main material used in SLS 3D printing, have been known for their high strength for decades, and the SLS printers allow printing these polymers without spending money on the full production cycle, so the process is significantly faster and cheaper.  Overall, SLS nylon is a great substitute for common injection molding plastics.

This is why we recommend using the SLS 3D printers for creating or updating small-scale manufacturing of strong polymeric parts. The Sinterit 3D printers have proven themselves to be a good choice for such tasks.

Want to find out more about the SLS technology or even get an SLS 3D printer? Our service can help you choose the machine that’s best for you! We will also help you choose proper materials for printing.

How to Create an NFT with a 3D Scanner