In this article, we will tell you how we 3D scanned an electric car for EVTech — an electric vehicle manufacturer. The scanning was necessary to revise the design, as well as to plan specific improvements to the car parts. The goal was to allow for the upgrade of the car’s body, hood, and fenders, manufacturing them using the method of rotational molding and automatic vacuum forming. To perform the scanning process, we chose the Rangevision Pro professional 3D scanner.

Read the article to learn more. 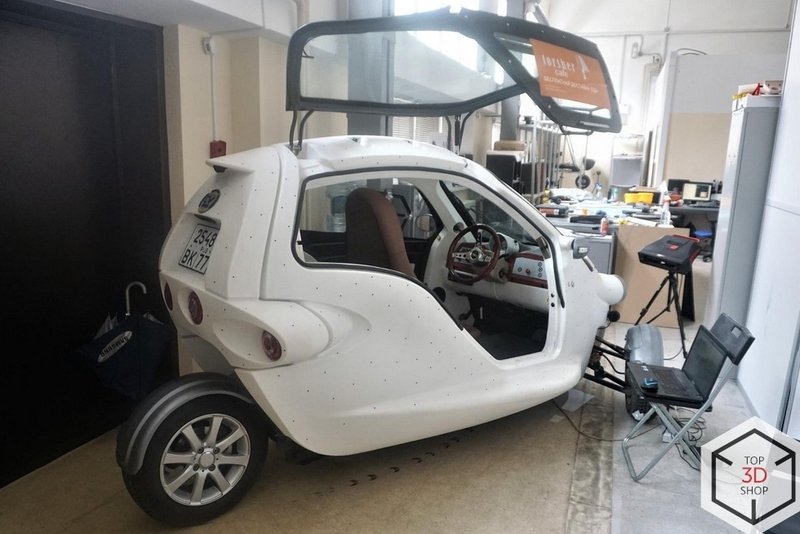 The employees of EV-Tech (a company that develops electric vehicles) asked us to scan a small electric car. The project was urgent and needed to be finished in a short time. The scanning had to be done in order to refine the body and internals of the car — to simplify the convenient placement of several components and assemblies and then upgrade the design according to the changes. 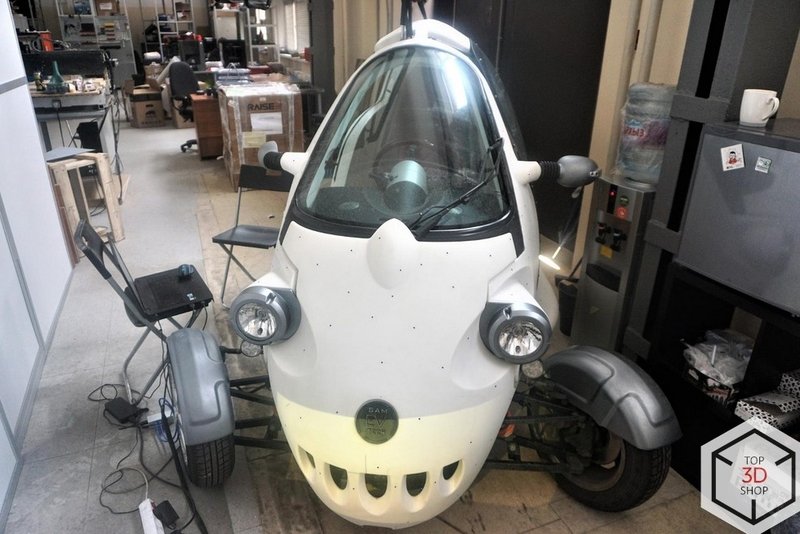 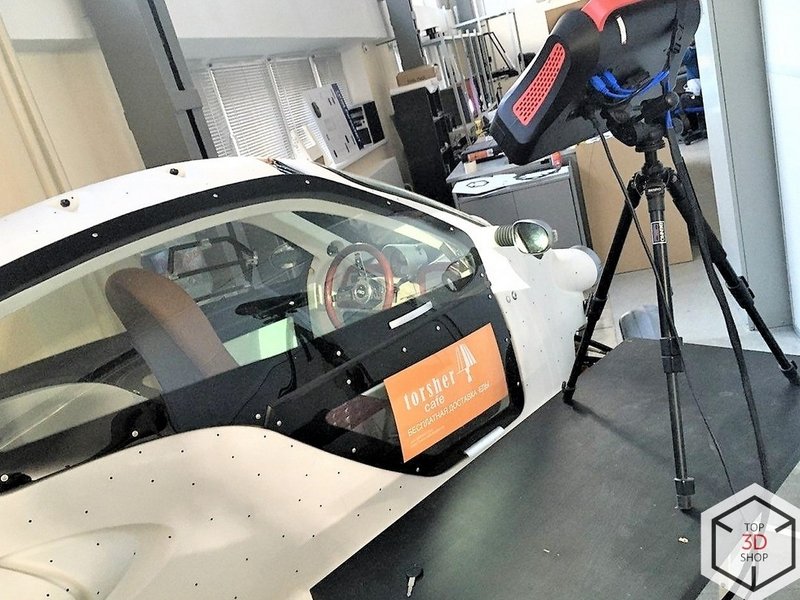 Prior to the scanning process, the car was transported into the workshop of our Service Department. The preparation took 30 minutes — reflecting and glaring surfaces were covered because the glares can be problematic to the scanning process. For example, sometimes, the light can be reflected in such a way that the final scan will have ‘holes’ and black spots. You can see the example below.

The markers were applied in order to create a grid that helps the scanner to calculate the coordinates of the points. The equipment and the calibration board were also installed for quick calibration in case the scanner has been moved.

The markers are placed in a random order, so their position relative to each other is never the same, so there will be no problems during frame alignment and the scanner will be able to accurately detect the shape of the scanned surface.

Scanning itself took a long time, let’s review the stages.

1. Getting the Basic Geometrical Information 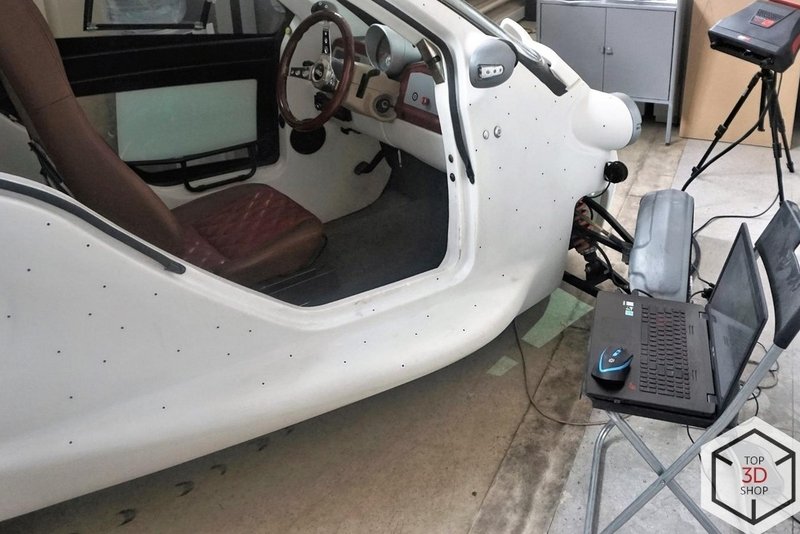 Picture 1.1 Side surface of the car. 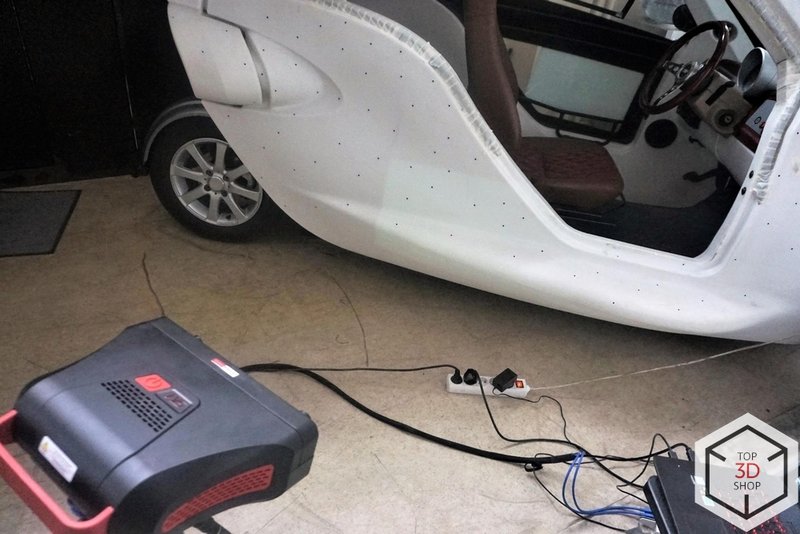 Picture 1.2 Side surface of the car.

The first frames covered the side surface of the car. (pic. 1).

This surface was chosen for the first scan due to being the largest one — the initial scan helped to find out some problems that were solved one by one as they emerged. Next, we will talk about them and the way we solved these issues.

One such problem was a rather large size of the project files.

Alexey Vorozhbit, a Service Department Engineer at Top 3D Shop says: “The problem was that the laptop with the Intel Core i7 CPU and the Geforce GTX 960M graphics card wasn’t able to merge and save the projects consisting of more than 150 000 points. We managed to solve the issue by taking advantage of the automatic simplifying function available in the Rangevision Scancenter software. Scanning and automatic alignment of surfaces were done in that program.”

We will keep this in mind and use the automatic simplifying option in our future projects in order to speed up the point cloud processing. Picture 2 shows the surface geometry after the first scans. Picture 3 shows the point cloud with the rear part of the car, tail lights, and the license plate. 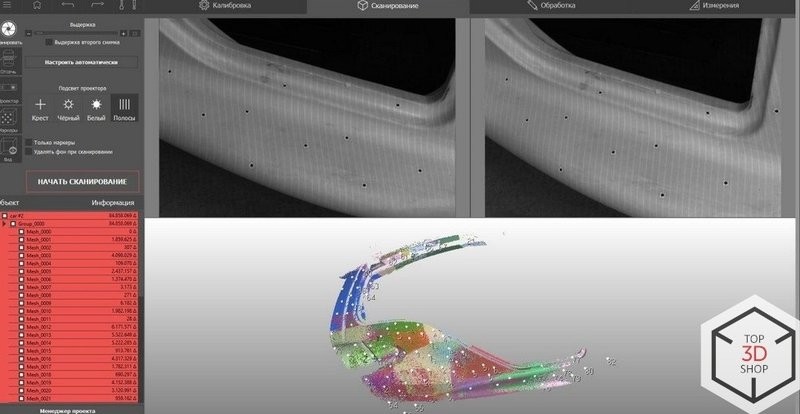 Picture 2. Point cloud of the side surface. 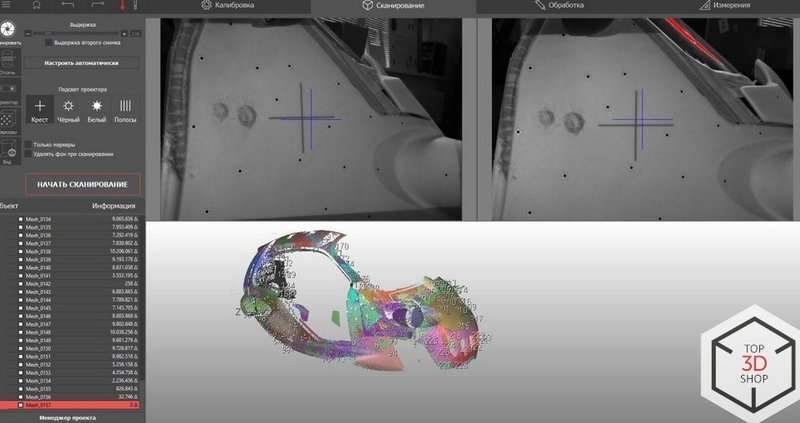 Picture 3. The surface we ended up with after scanning the rear side.

By moving the scanner, we captured the geometry of the front side of the car (picture 4).

The next thing to do was to scan headlights, rocker panels, and the edges of door frames — everything that can be easily removed without using a tire jack or a repair pit. You can observe the results in pictures 5, 6, and 7. In picture 7 you can see the result of aligning all of the frames into a single model. 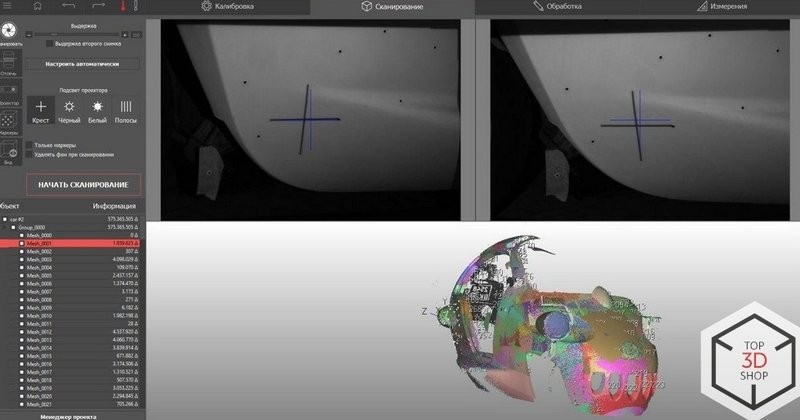 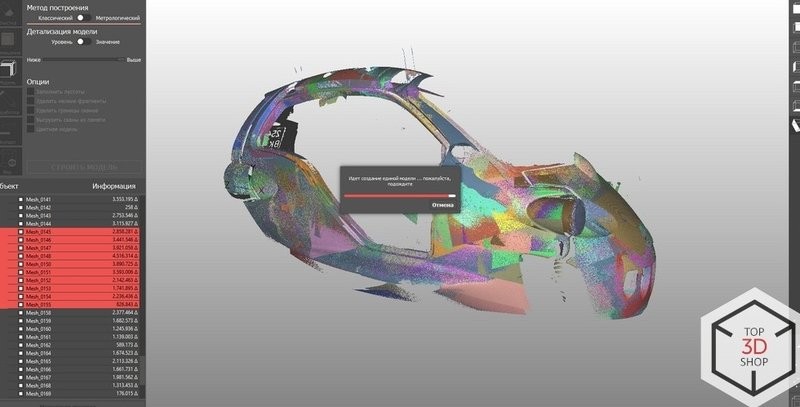 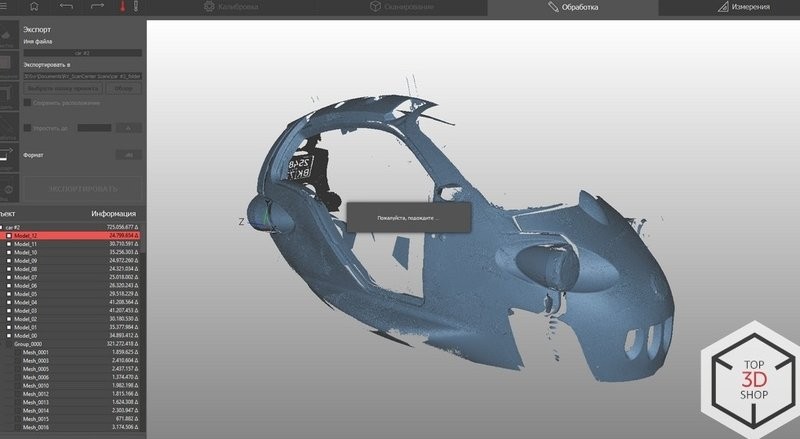 2. Processing of the point cloud and obtaining a model

Since the scan ended up being huge, consisting of around 500 million points, it had to be saved in parts — the program wasn’t able to import this amount of data in one go. We solved the problem by saving the scan in 13 parts that were merged into one grid later.

After creating the grid we used the ‘Mirror’ option that got us the missing part of the geometry (since the car is symmetrical).

The hardest part was getting rid of scanning defects.

In the pictures above, you may notice that many scans were far from perfect. Some models have holes and black spots. This was caused by lags and software crashes related to a USB-hub that connected the cameras to the laptop. 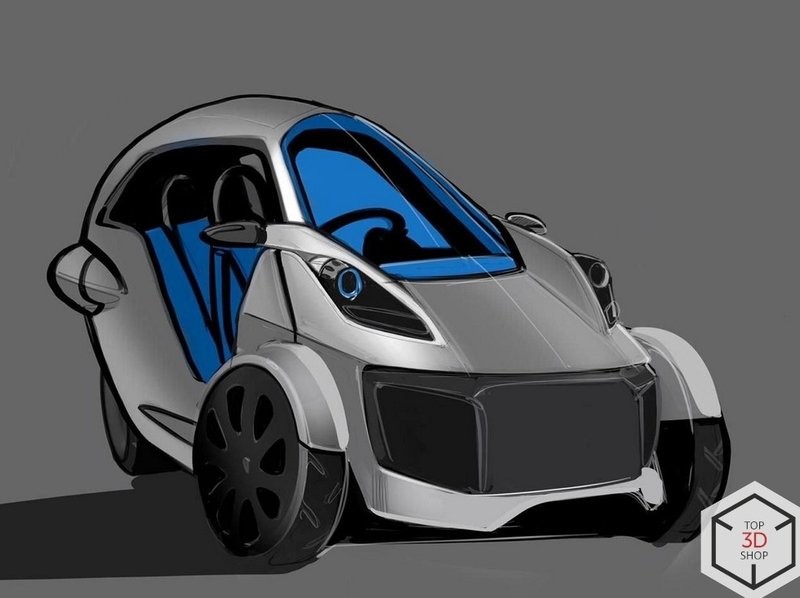 To avoid this defect one should connect the scanner directly to a PC that has a lot of RAM (more than 24 GB). The scanner’s packaging includes a mini-computer that can be used for scanning small objects. It’s better to have a more powerful PC to comfortably work with larger objects.

In our case, we fixed the problem by scanning the objects again and aligning the results.

Our Service Department recommends using handheld scanners for working with larger (more than 1 meter in any dimension) objects since they are better adjusted for working with bigger shapes. RangeVision was chosen for its high accuracy: in fact, it was even too good for the body parts of the car but was very useful for scanning the mechanical parts. 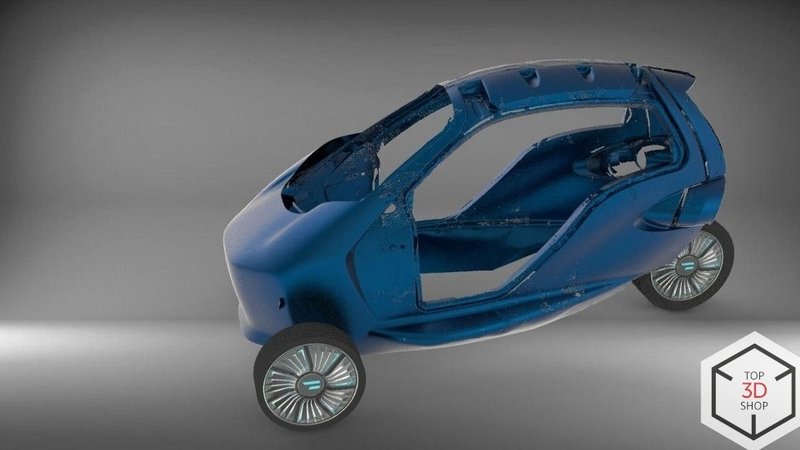 A final model turned out quite precise, with the margin of error no more than 0.2 mm compared to the original object. 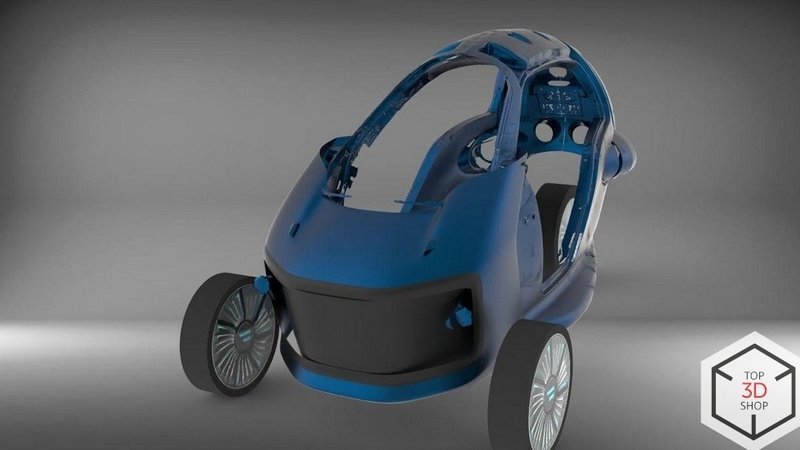 Provided the recommendations for work and setup were met, the Rangevision Pro has proven to be a high-quality professional scanner. We can recommend it to be used for engineering purposes in various fields, including R&D of body parts of cars, motorcycles, small boats and motorboats, for modding and repair. 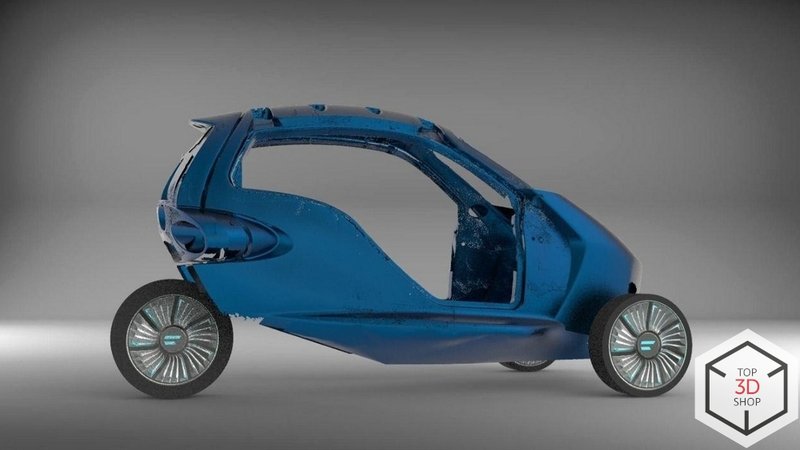 Buy the Rangevision Pro 3D scanner from Top 3D Shop and get original professional equipment with the official warranty.

Starting a Chocolate 3D Printing Business: The Story of Chocolama

3D printing in the art world: the fantastic sculptures of Dmitry Kawarga

[CASE]: How We Created the Model of Novo Nordisk Building

[CASE] 3D Printing in Architecture by the Example of Setl-City

3D Printing in Modeling with STUDIO 911 as an Example